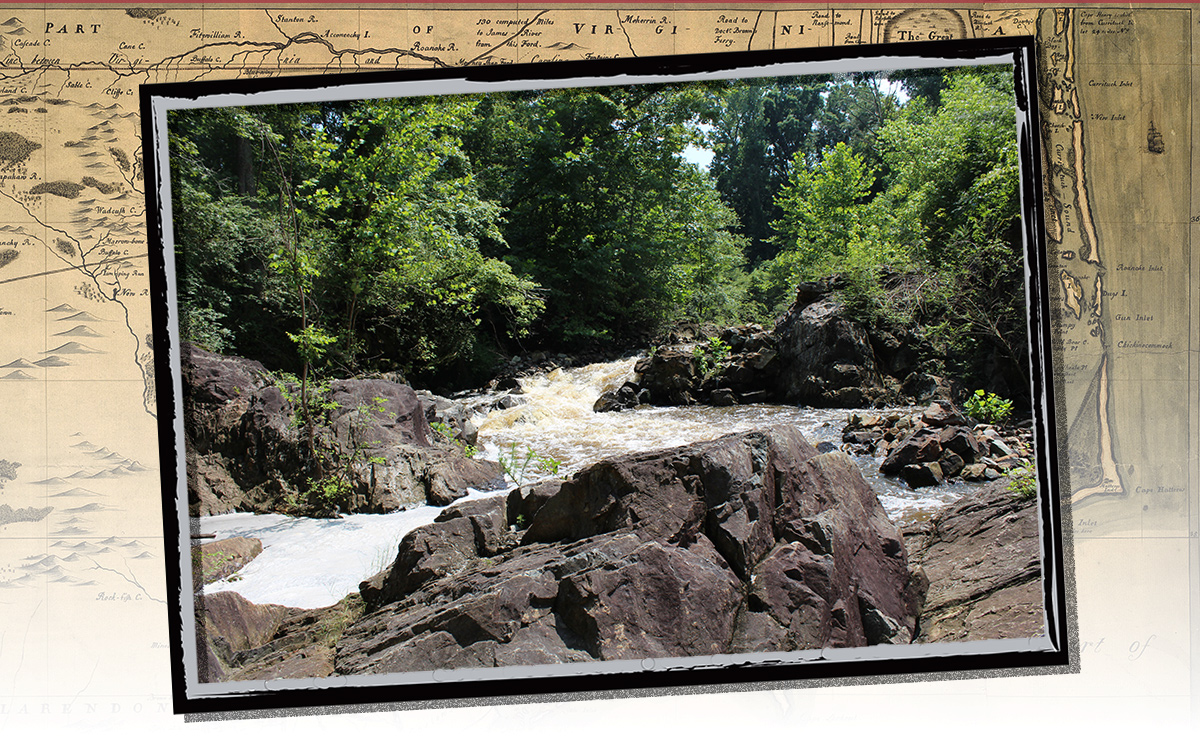 Looking at a North Carolina map, one can see that the state is rich in flowing waters. If you walked down our coastal plain from the Virginia line to the South Carolina line, you would cross at least five major rivers and seemingly countless smaller rivers and streams. Farther west, two major river systems service a good portion of the fertile Piedmont. But in the 1700s and 1800s, when transportation on the water was the most efficient means of travel, our unhelpful rivers were a barrier to colonization and an impediment to growth of the state’s economy.

In North Carolina, the coastal plain, where colonization began, and Piedmont, where the state’s economy flourished, are serviced by six principal river systems:

Those rivers are shown in the map above, starting from upper right and moving clockwise:

The Roanoke river system begins in the foothills of the Blue Ridge Mountains – with tributaries starting in both Virginia and North Carolina – and it flows nearly 400 miles to empty into the Albemarle Sound. The watershed of the Roanoke system drains a significant portion of northern North Carolina and southern Virginia.

The Tar River begins near the Virginia state line, takes the name Pamlico River as it broadens into an estuary south of Washington NC, and empties into the Pamlico Sound.

The Neuse River takes shape in the upper Piedmont and flows by Raleigh on its way to the very southern reaches of the Pamlico Sound.

The Cape Fear River officially begins where the Deep and Haw Rivers converge in Chatham County below Pittsboro. But those two tributaries start above Greensboro, giving the river system a total length of nearly 200 miles before it empties into the Atlantic Ocean below Wilmington. The Cape Fear river basin drains almost one quarter of the state.

The Yadkin – Pee Dee River system begins in the mountains of northwestern North Carolina, flows east as far as Winston-Salem, and then south across the entire state and on into South Carolina. Below the state line, it is joined by the Lumber River also flowing out of North Carolina.

The Catawba River has its origin in the mountains just east of Asheville, flows easterly until past Hickory, where it turns south, passing west of Charlotte and crossing the border into South Carolina.

Up and down the Atlantic seaboard, European colonization of America followed a common pattern: Settlers arrived by ship at the coast, where they established colonial towns. subsequently, as more settlers arrived, they pushed inland in search of land and opportunity. The move into the backcountry was accomplished either on foot through the wilderness, or – more efficiently – by water, taking advantage of rivers that flowed from the interior to the sea.

In its process of colonization and settlement, North Carolina did not follow that pattern. Earliest colonization came not from the sea – which had brought only the disastrous attempt of the “Lost Colony” – but from settlers migrating south from Tidewater Virginia. With the towns of Edenton, Bath, and New Bern established by 1720, the next logical step would have been a western movement of colonists. But here the rivers proved not only unhelpful, but obstructive.

No rivers to the west

The Atlantic coastline of the United States does not run north/south, but rather has a clear tilt to a more northeast/southwest orientation. In North Carolina, the slant is even more pronounced. Because the coastal plain and the lower Piedmont mirror that northeast/southwest orientation, our rivers flowing from the Piedmont to the sea tend to run from northwest to southeast.

Settlers in the early colonial towns found this river orientation obstructive in two ways. First, following those rivers upstream did not take them in their desired western direction. If they wanted to move west, they would have to abandon the rivers and strike out through thick forests – trackless except for the pathways of indigenous peoples and the trails worn by animals. And second, to make matters worse, western movement meant that instead of following a river, they now had to cross every river and stream in their path. A traveler walking west from the coast for 100 miles might have to cross 100 watercourses, many with steep clay banks and swiftly flowing water. Encountering a flowing stream, exploration up and down the bank might eventually reveal a river ford where they could safely cross over. Crossing a river might mean felling trees to build a raft, a time consuming process you would not welcome repeatedly.

Obstruction at the fall line

For colonists who chose to travel by boat on one of our northeastern rivers – the Roanoke, Tar/Pamlico, or Neuse – their progress might be good until they encountered the fall line.

Although they can be plagued with sand bars, snags and low water levels, coastal rivers are generally placid and broad, offering relatively easy travel. But where our rivers tumble from the elevated Piedmont down to the coastal plain – the fall line – the story is different. Travelers headed upstream are suddenly confronted by boulder-strewn whitewater rapids. Progress morphs from easy boating to laborious portage of a vessel and its contents around the falls. On the Roanoke River at Roanoke Rapids, for example, portage around the rapids meant an overland trek of several miles and a gain of 100 feet in elevation.

(Later, these fall line rapids would be valued for their potential to generate power for a mill, and cities would thrive there: on the Roanoke River, Roanoke Rapids; on the Tar River, Tarboro, Greenville and Rocky Mount; and on the Neuse River, Kinston, Smithfield and Goldsboro.)

The practical effect of travel from the coast being blocked or impeded by our rivers was that – unlike most of the American colonies – North Carolina would not be populated by colonists migrating west from the coast. Instead, European settlement of the state’s Piedmont heartland would come south from Philadelphia, through Virginia’s Shenandoah Valley, down the Great Wagon Road.

Colonists from coastal towns may have been impeded in their desires to migrate west into the Piedmont, but by the middle of the 1700s, that backcountry had been populated by immigrants flooding down the Great Wagon Road from Pennsylvania. With the fertile Piedmont populated with productive farms, the problem of our unhelpful rivers turned from access to the land to the ability to ship goods to market for export.

Roads of that era were crude, and the transportation of bulk goods was far better accomplished by rafting them downriver to a port city. On North Carolina rivers – and in South Carolina and Virginia as well – water transportation from the Piedmont to the coast was made dangerous by fall line rapids. Small, open boats called bateaux could run cargoes down the rapids, but it was dangerous work that added significantly to the difficulty of the journey.

But even when the bounty of the Piedmont was successfully brought down river, North Carolina’s rivers posed two serious problems. First, unlike our neighboring states, our coastal rivers did not flow to quality seaports. And second, our Piedmont rivers flowed out-of-state.

For the neighboring colonies of Virginia and South Carolina, coastal rivers brought agricultural products to serviceable seaports. In Virginia, the York, James and Potomac Rivers all emptied into the Chesapeake Bay, with access to the open ocean and to the great port of Norfolk. In South Carolina, the Pee Dee, Black, Santee, Edisto, Broad and Salkehatchie river systems all flow to the Atlantic Ocean. The Cooper, Ashley and Wando Rivers all converge at the world-class natural port of Charleston.

In North Carolina, our coastal rivers do not flow to top-quality natural ports. The rivers of the northern coastal plain – the Roanoke, Tar/Pamlico, and Neuse – release their waters not into the Atlantic, but into North Carolina’s coastal sounds. The early colonial towns of Bath, Edenton and New Bern were legitimate seaports, but they were significantly hindered when compared to other seaports with which they competed for trade. The shallow waters of the Albemarle and Pamlico Sounds limited the draft of the ships that visited those ports. And the need for passage through tidal inlets to connect with open ocean added friction to the process of trade. The principal inlets – Ocracoke and Hatteras – were capricious and dangerous, featuring constantly shifting sand shoals. Larger ships arriving on the ocean side could not pass through at all, but needed to transfer their cargoes into smaller vessels to be lightered across the bar to the sound. Such work was laborious and time-consuming. And the combination of dangerous shoals and additional transfer of cargoes drove up prices for shipping insurance. Then there was the simple question of distance: the port of Edenton is about 50 miles from the Atlantic Ocean, but to reach Ocracoke Inlet where a ship could pass from sound to ocean was a journey of close to 120 miles.

The only major river within the state that flows directly to the ocean is the Cape Fear River. Here, familiar old problems cropped up: passage downriver was impeded by the fall line rapids around Fayetteville, and shipping in and out of the port at Wilmington was plagued by dangerous offshore shoals –– including the extensive Frying Pan Shoals – that drove up shipping costs.

In the Piedmont, North Carolina’s rivers posed a different problem: the Lumber, Yadkin/Pee Dee, Catawba, and Dan – all flow out-of-state, the first three into South Carolina and the last into Virginia. These rivers could help Piedmont farmers transport their products to market, but because those markets were outside North Carolina, they meant lost revenues for this state.

The feeling that North Carolina was losing out to other states – even that our neighbors were actively  stealing from us – was strong. And it would surface in debates around many proposed “internal improvements” well into the 1800s, including the Dismal Swamp Canal, the Roanoke Canal, our first railroads, and the North Carolina Railroad. Before the Revolutionary War, it was natural for the colonies to compete strongly among themselves. If you thought that competition would decrease when we became united states, consider this 1790 argument against construction of a Dismal Swamp Canal to carry North Carolina products to the Virginia port of Norfolk:

“It is impolitic and dangerous as a state to enter into a confederacy, which at once will tend to aggrandize a neighboring nation, and impoverish our own – Norfolk from its situation will rise to be the emporium of commerce of the Southern States, while the eastern sea ports of North Carolina will dwindle into fishing towns – the one will rise into a proportionate ratio of trade, wealth, importance and populousness to the decrease, waste and insignificance of the other: it is prudent and politic to entertain a manly jealousy of neighboring states.”