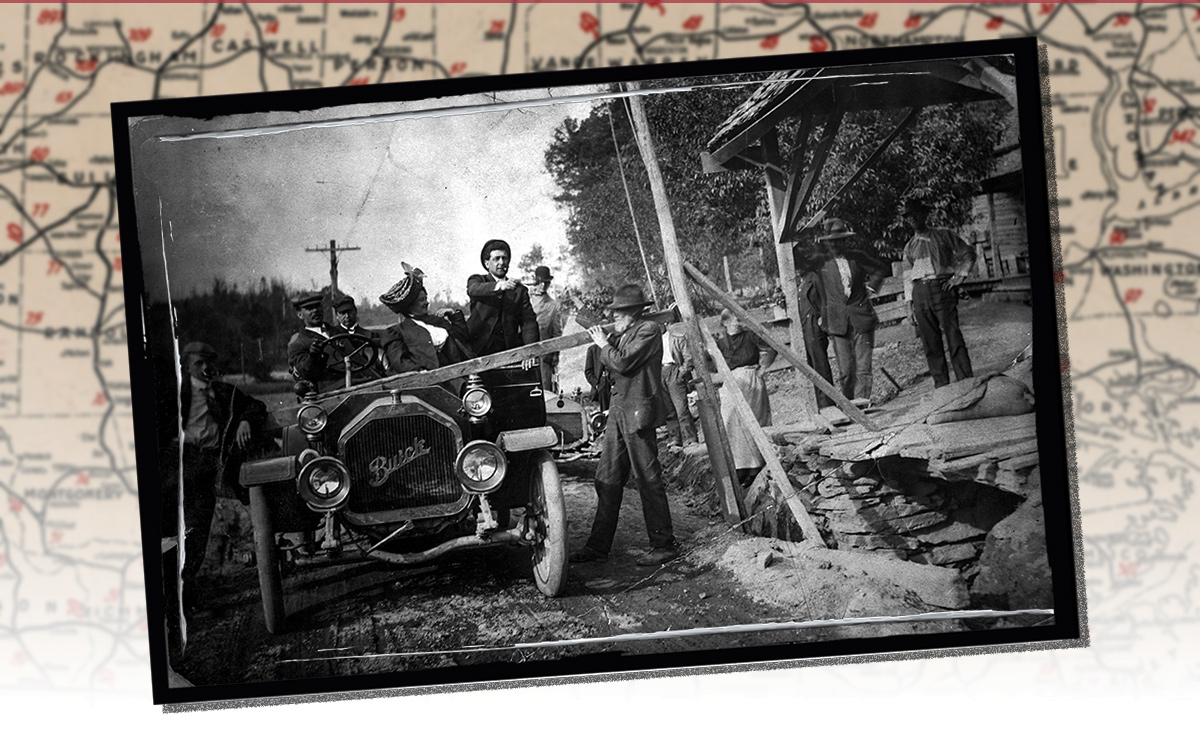 In the above 1910 photograph from Watauga County, the toll road attendant raises the bar to allow a Buick, having paid its toll, to proceed on what looks suspiciously like a joyride. In ancient times, traffic would have been blocked by a pike mounted horizontally on a roadside post. Once the toll was paid, the attendant would turn the pike to remove the blockage and let the travelers continue on their journey. In North Carolina, toll turnpikes proliferated over about a 40 year period in the 1800s, dying out for many years until their recent return. And of course wherever you found a turnpike, you were likely to find a shunpike.

The turnpike, or toll road, has existed since antiquity, with written accounts going back to India in the 4th century BC. The term “turnpike” – in use since at least 1678 – refers to the weapon known as a pike, a long spear commonly used by infantry in the Middle Ages.

A pike mounted horizontally on a roadside post could be rotated so that it blocked passage on the road. When the traveler paid the specified toll, the attendant would turn the pike so as to allow the traveler to proceed on their journey. Whether a toll road is built by a government or by a private company, the fees charged to use the road are designed to defray the costs of construction.

Although the state of Virginia built a turnpike in 1785, the first important, long-distance toll road was the Philadelphia & Lancaster Turnpike in Pennsylvania. Unable to afford the cost of construction itself, the government of Pennsylvania authorized the Pennsylvania & Lancaster Turnpike Road Company to construct the route as a for-profit initiative. It may have been the first public/private partnership for infrastructure in the country. When stock subscriptions were opened for sale in June of 1792, public interest was intense. One observer coined the phrase “turnpike rage” to describe the mad scramble to purchase shares, and he noted that the frenzy was too much for some:

Everything is now turned into Speculation. The quiet Quakers, who attended for the purpose of joining in the Subscription, and encouraging the road, finding such an uproar, withdrew.

Interest in turnpikes increased in North Carolina after the War of 1812, their creation championed by the attorney/legislator/jurist/educator and visionary leader Archibald DeBow Murphey. In 1819, Murphey published the highly influential “Memoir on Internal Improvements” calling for the state to take the initiative in creating turnpikes and canals to stimulate economic activity. Almost all roads of the era were extremely hard to travel in dry times – heavily rutted and clouded with dust –  and they were virtually impassable in wet times. Farmers were often simply unable to transport their produce to market.

Turnpikes were seen as a class of improved roads that would make travel easier. In the parlance of the day, infrastructure projects such as turnpikes and canals were known as “internal improvements,” and progressive leaders like Murphey believed they could help extricate the state from a long economic stagnation that had earned North Carolina the dismissive nickname of “The Rip Van Winkle State.” Murphey extolled the possibilities:

If North Carolina had her commerce concentrated at one or two points, one or more large commercial cities would grow up; markets would be found at home for the productions of the State; foreign merchandize would be imported into the State for the demands of the market; our debts would be contracted at home; and our Banks would be enabled to change their course of business.

Faced with entrenched conservatism on the part of the elite eastern planters – who dominated the state legislature – Murphey and his supporters had little luck in convincing the state to take the initiative in creating internal improvements. (Archibald Murphey himself would die before the projects he championed were realized.) But they did talk the legislature into creating an Internal Improvements Fund that would use proceeds from the sale of lands confiscated from the Cherokee Nation (No taxes needed to be raised!) to fund road and canal projects.

In the 1820s, the legislature followed Archibald Murphey’s lead and appropriated funds for a number of turnpikes around the state. These were not state roads; they were speculative private initiatives that would receive limited funding from the state purse.

Many turnpike projects projects were never completed, and most had little lasting effect on their region. But among the 109 toll turnpike projects partially funded by the legislature over a 40-plus year period, two stood out for their positive effect: The Buncombe Turnpike and the Fayetteville & Western Turnpike.

Completed in 1827, the Buncombe Turnpike connected Greenville, South Carolina with Greenville, Tennessee, passing through Saluda Gap, Asheville and Warm Springs. The turnpike was the state’s best and longest toll road – 75 miles – and it was heavily used, especially by farmers driving large herds of cattle, horses and hogs to markets in South Carolina. The Buncombe Turnpike galvanized the economy of western North Carolina, opened up the region to tourism, and it was on of the few state-supported internal improvement projects that actually paid dividends.

In 1849, the legislature chartered the Fayetteville & Western Plank Road Company to sell stock in a toll road connecting Fayetteville – an eastern market hub – with western farmers around the Moravian town of Bethania. Plank roads – elevated wooden roads – were seen for a brief span of years as the infrastructure technology that would lift North Carolina travelers out of the mud.

When it was completed in 1854, the Fayetteville & Western Turnpike was 129 miles long, and it carried as many as 20,000 wagons a year. Toll booths were positioned about 11 miles apart, and the fees charged were: horse & rider, 1/2 cent; one-horse wagon, 1 cent; 2-horse team, 2 cents; and 6-horse team, 4 cents. It had been criticized as “A monument to folly” when it was proposed, but once the turnpike was in operation, that kind of talk died away.

The era of toll turnpikes ran from roughly 1820 to 1860, and it was a time of high expectations that the improved roads would boost the economy. In 1858, S. Maylon Fox, Chief Engineer of the Western Turnpike (running from Asheville to Murphy, and then on into Tennessee) produced a glowing report on the beneficial effects of a turnpike:

The commercial prosperity of every county depends on the ease of personal intercourse and the facility with which the products can be brought to market. Capital will always seek places where good roads give to property increasing and permanent value. What benefits the capitalist benefits the farmer and manufacturer who depend on him for the disposal of the products of their labor; their interests are common, and these classes contribute to the state. It will always be found that in proportion to the excellence of these means of intercourse is the prosperity and intelligence of a county. Where they are in a high state of perfection, the people will be wealthy and enlightened, and where they are neglected, the people will be barbarous.

It may have been true that where a turnpike was neglected, the people would be barbarous, but the unfortunate truth was that most 1800s turnpikes were neglected. Often, political disputes and local rivalries kept a turnpike from being built at all, even when the legislature granted a charter. And when they were constructed, the roads were expensive to build and maintain, leading the private corporations that constructed them to reduce costs by cutting corners. In the case of plank roads, lack of maintenance was a particular problem: A dirt road that became rough was still generally usable, but a plank road with rotting boards created a serious hazard of man or beast crashing through a plank and breaking a leg.

With a few exceptions, the turnpikes built in North Carolina in the first half of the 19th century did little to stimulate the economy. They made travel easier for individuals and for the stagecoach, but in general they did not cause an increase in long-haul freight, nor did they lower the going rates for it.

It is true that competition from canals and, especially, railroads contributed to the demise of turnpikes, but most turnpike companies in the United States were failing – and losing money for stockholders – before the construction of railroads.

No discussion of turnpikes could be complete without mention of shunpikes. As soon as the first toll station was established on a turnpike in antiquity, there was likely some traveler who tried to avoid paying the fee by using smaller secondary roads to bypass the toll collector. These local roads became known as shunpikes, and the act of avoiding turnpike tolls as shunpiking. Often, the turnpike authorities would establish a toll station at a river bridge or a mountain pass in an effort to discourage shunpiking, but frugal travelers just as often found nearby river fords or over-mountain roads.

The first known use of the word “shunpike” in print was in 1804. And lest you think these roads of avoidance were few and far between, if you do a web seach for “shunpike,” you will find many a listing for “Shunpike Road” all around the country.

The limited access design of modern turnpikes makes it virtually impossible to exit the toll road, circumnavigate the toll booth, and then re-enter the main road. And by using transponders, systems such as North Carolina’s Quick-Pay have dramatically reduced the inconvenience of stopping at a toll booth – one of the primary complaints of turnpike travelers in the fast-paced automobile age. But wherever there is a toll road, you can bet there are locals who know of certain shunpikes and use them in their daily travels. In our age, the word “shunpiking” has taken on a broader connotation of traveling with the specific intent of using back roads rather than toll roads or Interstate Highways.

The featured photo of a 1910 toll station in Watauga County is courtesy of the North Carolina Collection, Wilson Library, The University of North Carolina at Chapel Hill [P0086_85-178].

The photo of an inn on the Buncombe Turnpike is courtesy of the North Carolina Room at the Pack Memorial Library in Asheville [A695-5].

The image of a hay wagon on the Fayetteville & Western Turnpike is courtesy North Carolina Archives & History [N_77_7_121_A].

For history wonks: Archibald Debow Murphey’s “Memoir on the Internal Improvements Contemplated by the Legislature of North Carolina and on the Resources and Finances of That State” can be read in its entirety online. Use the link in the title above.