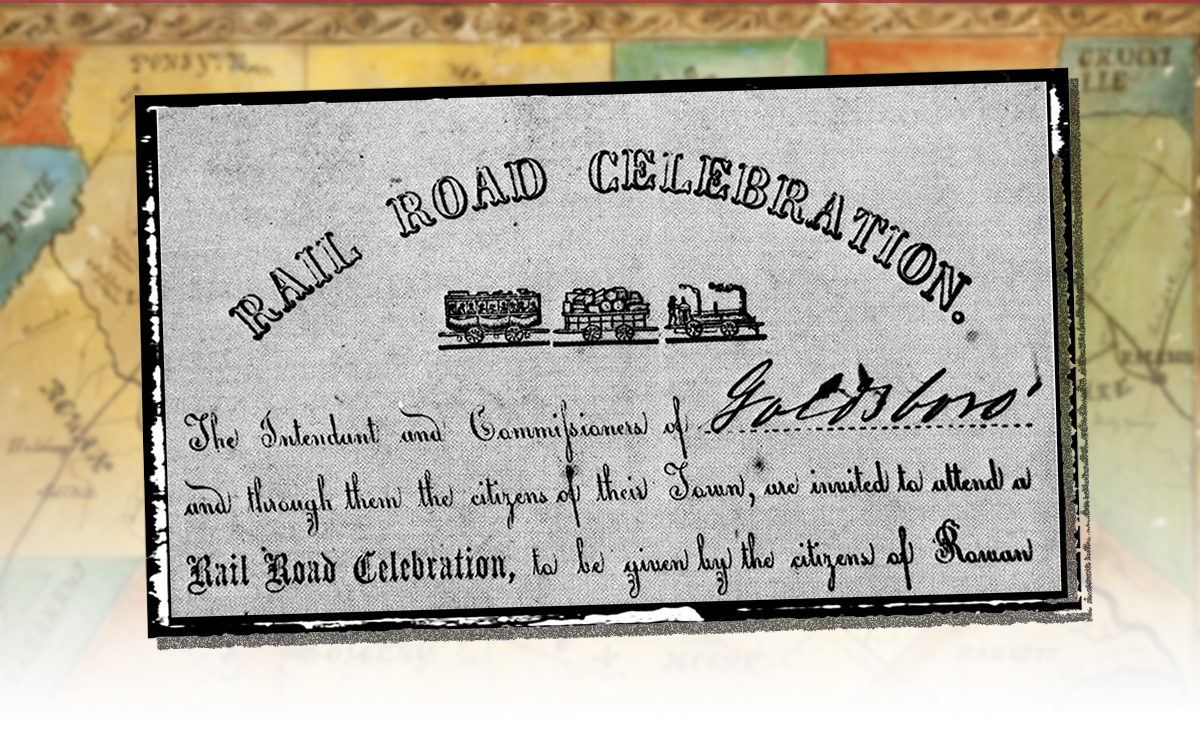 Construction of the North Carolina Railroad in the 1850s was cause for jubilation and celebration. Although there had been acrimonious debates about who should pay for such an ambitious endeavor, almost everyone agreed that the railroad from Goldsboro to Charlotte would bring great benefits to the state, arousing it from the economic, educational and cultural stagnation that had earned North Carolina the derogatory nickname of “The Rip Van Winkle State.”

The North Carolina Railroad: Getting to the first shovel.

As early as 1827, Joseph Caldwell, first president of the University of North Carolina, had proposed a railroad spanning the state from New Bern to Asheville. In 1828, over 200 people gathered at a Chatham County farm to hear Dr. Caldwell speak of the possibilities of such a railroad, and the number in attendance at the event demonstrated deep public support for what was then a new, but promising technology.

Shortly after the Chatham County meeting, some North Carolinians had the chance to gape at a real huffing-puffing railroad, if only as experimental railroads in Fayetteville and Raleigh. And by 1840, North Carolina had its first operational railroads – the Wilmington & Weldon and the Raleigh & Gaston – but they were north/south lines that served only the coastal plain. The idea of a cross-state line was still alive and mired in politics, but it had powerful and passionate supporters, including Governor John Motley Morehead, who  waxed lyrical in extolling the plan:

Let the North Carolina Railroad like a huge tree, strike its roots deeply into the shore of the Atlantic, and be moistened by it waters, and at last stretch its noble trunk though the center of the State, and extend its overshadowing and protecting branches through the valleys and along the mountain tops of the west, until it becomes indeed, the Tree of Life to North Carolina.

It was not until January of 1849, when Speaker of the Senate Calvin Graves cast a courageous and historic tie-breaking vote, that the North Carolina Railroad came into being – at least on paper. There still remained the not-trivial tasks of planning the route of the railroad and of actually laying 200-plus miles of track.

But excitement over the coming of the North Carolina Railroad was in the air. When the bill authirizing the railroad was passed, the Raleigh Register trumpeted:

A late session of the Legislature will mark a new era in the history of the State… A great system of Internal Improvements has been adopted… which will shake off the incubus of lethargy and sloth for which we as a people have become proverbial.

They celebrated the beginning.

On July 11, 1851, a ground breaking ceremony was held in Greensboro to officially launch construction on the North Carolina Railroad. According to the Greensboro Patriot newspaper, the crowd that gathered was the largest in the city’s history. A procession formed, headed by clergy, followed by stockholders, Odd Fellows, Free Masons, and the general public. When the procession reached the site of the railroad right-of-way, the crowd formed 10-or-20-deep around a 100-foot-square area.

John Motley Morehead – no longer governor, but now serving as president of the new railroad – made a long speech. Calvin Graves – no longer a senator, having been voted out of office by his constituents for the sin of voting in favor of a railroad that didn’t even serve his own county – made some remarks. And then he lifted the ritual first shovel of dirt.

After Graves placed his shovel full of dirt in a copper box made especially for the occasion, other dignitaries added to the box a copy of the railroad’s charter, a written list of the names of all stock subscribers, some current newspapers, some coins, and a scroll. The box was sealed, not to be opened for 100 years, at which time the scroll was to be publicly read. After all the speechifying and ritual gestures, the assembled crowd got down to the real business of celebration – North Carolina style – by dining on barbecue.

They celebrated the first trains.

We today are so immersed in – and blasé about – technology that it is hard to understand how big a deal it was when the first railroad train rolled into a 1850s North Carolina town. I can only guess that we might feel that sensation today if a rocket ship landed downtown. The sign of a new era, indeed, and gape-worthy.

In the bucolic 19th Century landscape, railroad trains were whistle-shrieking, fire-spitting, smoke-bellowing contraptions that  dropped people’s jaws. This was especially true west of Raleigh, where no train had ever been seen before.  Young English author Charles Dickens captured some of the exhilaration of early rail when he wrote in his journal of American travels:

There – on, on, on – tears the mad dragon of an engine with its train of cars; scattering in all directions a shower of burning sparks from its wood fire; screeching, hissing, yelling, panting, until at last the thirsty monster stops beneath a covered way to drink, the people cluster around, and you have time to breathe again.

Caught up in the excitement of trains in general and of the auspicious moment when the first train actually steamed into their town, municipalities all along the line staged celebrations. Work on the line was simultaneously pushing east from Charlotte and west from Goldsboro, so celebratory events popped up on two timelines.

In the town of Graham, the Alamance Gleaner described the arrival of the first North Carolina Railroad train (in fact, first any train) in Alamance County:

The eyes of a hundred people stared in open eyed wonder at the strange monster, other eyes of a hundred plain but noble countrymen of old Alamance sparkled in expectation…. This was indeed a proud and glorious day for old Alamance. It was to celebrate the completion to that point of the North Carolina Railroad, which has been considered the greatest public blessing ever conferred on the country and has done more than any other one thing to aid her material development and promote her manufacturing interests…

On the fourth of July, a crowd of around 5,000 gathered in Lexington to greet the train, but its arrival seems to have been delayed when a heavy rain storm washed out a culvert.

In Thomasville on the 9th of November, some 6,000 gathered for speeches, short train excursions and, yes, barbecue. The latter was provided by state senator John W. Thomas, who was also the Master of Ceremonies. Senator Thomas had lobbied hard for the railroad to pass by Fair Grove, his plantation in Davidson County, but the railroad company chose a different route. Undaunted, Thomas simply bought land on both sides of the newly selected route and started the town of Thomasville.

The arrival of the train was hailed by an almost unanimous concourse of the inhabitants of the town, old and young, great and small, male and female, white, black, including all the rest of mankind who sojourn here, besides not a few from the surrounding country.

But Greensboro, thinking ahead, did not stage a public celebration of the first train. In a short time, the final “golden spike” would be driven when the eastbound and westbound construction crews converged just west of town. Greensboro elected to wait until it could celebrate on a scale befitting the completion of the entire railroad line. It was a sensible, well-thought-out plan that, in the end, would not go well.

The king of all celebrations was held at Salisbury on January 4, 1855, marking the arrival of the first train eastbound from Charlotte. Statesville announced a Rail-road Barbecue and Rail Road Celebration. Overflowing with hospitality, the city invited “The Intendant and Commissioners of Goldsboro and through them the citizens of their Town” to attend the shindig.

Then Salisbury went whole hog with newspaper notices of the Rail-road Barbecue, “…to which the Citizens of the State of North Carolina generally, are respectfully invited.”  Talk about a house party!

On the appointed day, Grand Marshall Rufus Barringer led a procession from the courthouse to the not-yet-completed railroad depot, stepping out to the music of the Salisbury and Concord brass bands. Late in the morning, cutting through the music and booming cannons, a shrieking steam whistle proclaimed the arrival of the first passenger train, festively decorated with banners. The crowd cheered in greeting. Then, as Judge John W. Ellis gave a speech, two more trains arrived, both full with passengers.

John Motley Morehead then spoke at length. When he recounted the heroic vote cast by Senator Calvin Graves (who was in attendance), the crowd erupted in cheers, and the locomotives on site blasted their steam whistles. Morehead announced that while the entire roadbed was complete and 118 out of 223 miles track had been laid, an additional one million dollars would be required to complete construction. (One guesses that he did not dwell on the significant cost overruns that had been incurred.) But Morehead was confident that the state legislature would authorize the additional funding to complete the railroad. Nathan Boyden of Salisbury stepped forward and called for three cheers for the legislature, and the crowd responded enthusiastically.

Following the speechifying, a Professor Elliot captained a hot-air balloon ascension that drifted for five miles, but which came back to earth in time for a grand ball at Murphey’s Hall.

Altogether, the day’s attendance was somewhere between ten and fifteen thousand, and they dined on a meal prepared from 24 hogs, 16 sheep, 6 beeves, 10 opossums, and 1,400 pounds of bread. But celebration is hungry work, and it was reported that the supply of barbecue ran out.

They celebrated the completion. (Or at least tried to.)

On Christmas Eve of 1855, the eastbound and westbound construction crews laying track for the North Carolina Railroad were only four miles apart. Tantalizing as their proximity was, the decision was made to cease construction over the Christmas holiday, picking back up after New Years Day. When work did resume, it was hampered by heavy snow and bitterly cold temperatures.  Finally, on January 29, 1856, at a point midway between Greensboro and Jamestown, the two crews converged. David F. Caldwell of Greensboro – a long-time loyal supporter of the railroad – drove the last spike. The North Carolina Railroad was complete!

The two work trains headed east to Greensboro to spread the news, and there the were greeted by:

…such a hallooing, singing and cheering by the negroes – commingled with the bellowing of two engines, perhaps was never heard before by our citizens; the next day, through trains ran from Charlotte to Goldsboro.

What they said about it

Even before the North Carolina Railroad was complete, newspapers along the line celebrated the new rail service in print as it was incrementally implemented. In June of 1855, when the first daily trains operated between Goldsboro and Hillsborough, the Hillsboro Recorder bragged:

On the Central road may be daily seen trains of new and elegant cars propelled by splendid and powerful engines, speeding their way through the heart of the Old North [State]. What North Carolinian can survey this great State work without emotions of pride that Old ‘Rip’ had waked up and in her strength presumes to compete with sister States in the great improvements of the age.

For the story of the early days of the NCRR, see Allen W. Trelease’s book, The North Carolina Railroad, 1849 – 1871, and the Modernization of North Carolina. The book is published by UNC Press.