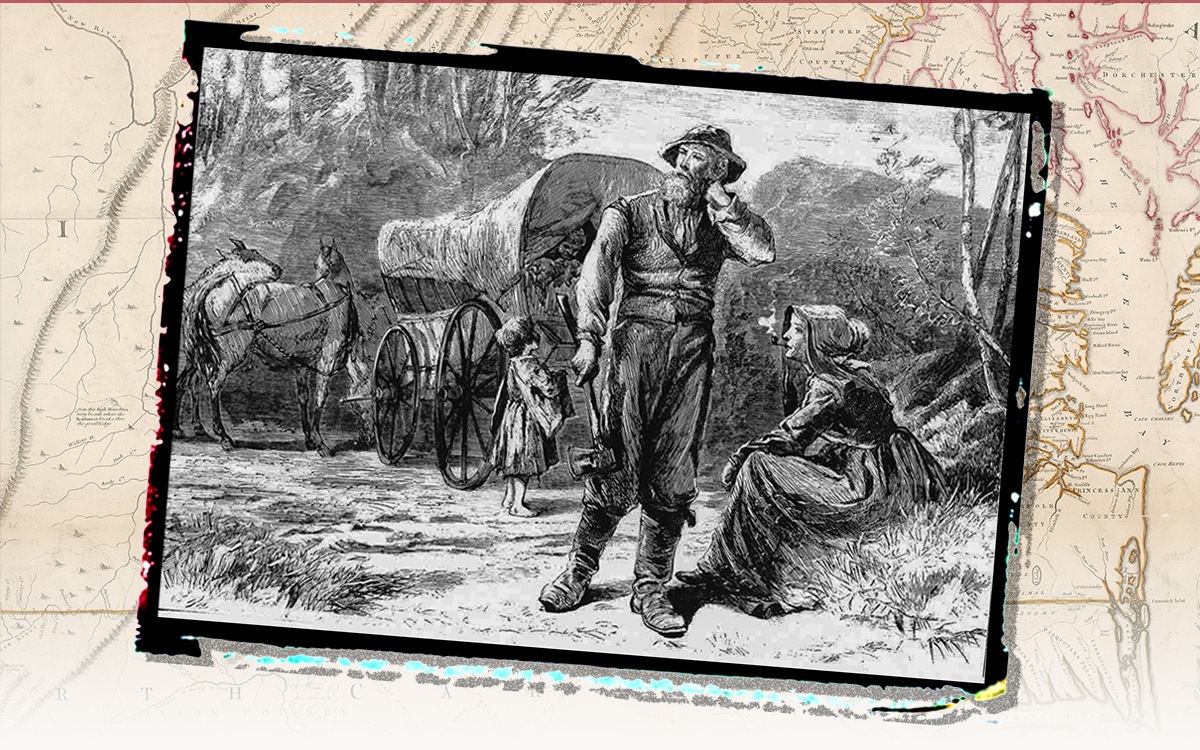 The Great Wagon Road was not really a road, and it wasn’t great for wagons, but in the mid-1700s it enabled a massive migration that populated the heart of North Carolina in patterns of ethnicity, religion and culture that are still in evidence today.

Philadelphia, one of the most important seaports in Britain’s American colonies, had been established in the late 1600s by English Quakers under the leadership of William Penn. The Quaker ethos dictated that the city be a place where diverse cultures and religions could live together in peace, and the area became a magnet for a potpourri of immigrants fleeing oppression and economic hardship in Europe.

Successive waves of Germans and Scotch-Irish flooded the area, most of them farmers looking for a homestead. But the rumors of plentiful, cheap land that had enticed them there turned out to have over-promised. Germans who arrived at Philadelphia discovered that the founding English Quakers possessed virtually all the prime land near the city, so the new arrivals looked west, where land was still available. When the Scotch-Irish arrived, they found the prime land to be occupied by the English and Germans, so they moved even farther west.

This pattern of German and Scotch-Irish settlements leapfrogging each other – yet rarely commingling – continued west into the Cumberland Valley. The farther west they moved, the more they found themselves on an ill-defined boundary that separated European colonists from native American tribes. Encroachment on land reserved by law for the native tribes was common, and it was commonly accepted among the settlers that such encroachment was justifiable:

…it was against the laws of God and Nature, that so much land should be idle while so many Christians wanted it to labor on and to raise their bread

And the authorities, despite their halfhearted efforts to honor native territorial rights, had reason to turn a blind eye. The provincial secretary explained how these new colonists could be useful to the peaceful people of Philadelphia:

a considerable number of good, sober people came in from Ireland, who wanted to be settled. At the time . . . we were under some apprehension of the Northern Indians . . . I therefore thought it might be prudent to plant a settlement of such men as those who had so bravely defended Londenderry and Inniskillen, as a frontier, in the case of any disturbance

Relief in the form of a road

The “Northern Indians” in question were primarily interested in resisting the exact type of incursion into their tribal lands that the authorities were promoting. And although their efforts would ultimately fail, their presence inhibited migration from the Cumberland Valley to lands farther west.

Confronted by hostile tribes and by the looming Allegheny Mountains, immigration west out of the Cumberland Valley slowed. But there was no slacking in the tide of immigrants flooding into the Cumberland Valley from the east. The result was an environment of societal anxiety, with land availability plummeting, land prices skyrocketing, and continuing tensions between Germans and Scotch-Irish.

It was a pressurized situation that needed a relief valve. The valve turned out to be a road, commissioned by the colony of Pennsylvania, from Harris’ Ferry (now Harrisburg) south toward the Potomac River and Maryland. Small groups of people began to sniff their way south in search of land and opportunity. The traveling groups were most often German or Scotch-Irish extended families, many of whom were second or third generation immigrants. Rarely did individuals set off on the journey. The notion of rugged American individualism would have mystified these immigrants, their strength being rooted in a deep-rooted sense of community based on shared religion and culture.

And so the flow south started. It was a trickle in the 1730s, but in a decade it would become a surging flood.

"A Great Wagon Road," but why do we speak of a road?

South through Maryland they traveled and on into the Valley of Virginia (the Shenandoah Valley). Their route became known collectively as The Great Philadelphia Wagon Road, but it was not a single road cut through the wilderness. Rather, it was a network of animal trails, footpaths, and later, wagon roads heading generally south along whatever route let a party move forward. Following parties might use that same path, or they might discover a more accommodating river ford or mountain gap and veer in that direction.

Much of the route from Pennsylvania, through Virginia, and onto North Carolina was superimposed on the ancient Warrior’s Path, a narrow track well-established through generations of use by Iroquois, Shawnee, Cherokee and Catawba for tribal trade and warfare

In the broad, flat northern valley, the going was relatively easy. But the farther south they went, the rougher the terrain and the less developed the trails. Work parties would be sent ahead to fell trees along the single-track trail to widen the path for wagons.

Where flowing water had to be crossed, even known river fords sometimes had to be improved before the teams of oxen pulling the big Conestoga wagons could make it across. Work parties would attack the banks with pick and shovel:

The approach to the river was pretty good, but the exit was all the harder. We had to work till night, before we could make the opposite bank passable so that we could drive up. We passed the night there.”

There were tales of parties who, stymied by slopes too steep and/or slippery for the oxen, dismantled their wagon and hand-carried the wagon and its load to the summit. It was a constant process of finding a pathway, of doing whatever it took to go down it, of sniffing out a way forward.

Bishop August Gotleib Spangenburg, a Moravian who made an early trek from Pennsylvania to North Carolina, was asked by his superiors back north to advise them on the best route south. He struggled to offer useful information:

How the road would run, I do not know…but why do I speak of a road when there is none but what the Buffaloes have made…?

Hostility was all around.

As had happened in Pennsylvania, native tribes bristled at Europeans encroaching into areas – like the Shenandoah Valley – ceded to them by treaty.

We had not been long in the Use of this new Road before your People came, like Flocks of Birds, and sat down on both sides of it, and yet we never made a Complaint to you, tho you must be sensible those things must have been done by your People in manifest Breach of your own Pro­posal made at Albany.

However, the flow of colonists would not be denied. In 1744, the tribes granted to Europeans the right to use the valley road, for which they received some quantity of English goods. But tensions remained between Indians and whites. At times, the tide flowing south felt threatened enough in the valley that they established an alternate route south. That road – known as the Lower Pennsylvania Road – ran parallel to the valley route, but east of the Blue Ridge Mountains.

And it wasn’t just native tribes the southbound feared. In areas of the valley where German and Scotch-Irish had already established permanent settlements, traveling Moravians felt so unwelcome that they switched to the eastern road.

Moravian Leonhard Schnell consulted a German innkeeper in the Shenandoah Valley about how to continue his travel:

I asked him for a way to Carolina. He told me of one, which runs for 150 miles through Irish settlements, the district being known as the Irish tract. I had no desire take this way, and as no one could tell me the right way, I felt somewhat depressed.

It was a continuation of the tribalism that had kept the various groups separate back in Pennsylvania. The Lutheran Germans, Moravian Germans, and Presbyterian Scotch-Irish were all Protestant dissenters, and the Lutherans and Moravians shared the German language. Yet all three groups were ethnocentric and insular, and each was fiercely determined not to see its culture diluted by wrong-thinking “others.” This attitude would have a profound effect on how and where they settled when they reached North Carolina.

And still south they came, often not because it was a destination, but because it was the only option. They were fleeing the north. At first they fled because they found the overcrowding and high land prices there to be insufferable. After the 1755 defeat of British forces at Fort Duquesne (now Pittsburgh), they fled from vulnerability to French and Indian forces.

To the west, they were hemmed in by mountainous terrain and by unwelcoming tribes. And if they veered east, they bumped into English colonists migrating west out of the Tidewater region, seeking the same farm land they sought. South was the only option open to them.

Later, North Carolina would become a specific destination when news came back from earlier migrants that prime land was available at 3 Pounds Sterling for 100 acres. Now, in addition to being pushed south, they were pulled in that direction

A footpath becomes a wagon road

Ahead of each small migrating cohort lay seemingly endless wilderness, the route forward nothing but a foot path leading into the forest and through the next mountain gap. But in their wake each group left something just a little more more akin to a road. The path a little wider; the banks of a stream a little easier for a wagon to navigate. They left something that the party behind them could, in turn, use and improve as they passed through.

By 1755, the route was well established enough to appear on the highly influential “Map of the Most Settled Parts of Virginia” as “The Great Wagon Road from the Yadkin River through Virginia to Philadelphia distant 435 miles.” Starting at Philadelphia, the road ran west to Harris’ Ford (Harrisburg), then to Chambersburg, where it swung south, up the Shenandoah Valley to Roanoke. South of Roanoke, it curved east over the Blue Ridge Mountains (shown in the map detail above), then south again to enter North Carolina just below present-day Martinsville VA. In North Carolina, it joined the Trading Path and continued south and west into South Carolina and Georgia.

It was a long and arduous journey, but when it finally brought tens of thousands of opportunity-seekers into North Carolina, they would find opportunity aplenty. The Piedmont of North Carolina was a land ready to be occupied. They would fan out across the back country to stake claims for farms. And they would build settlements along the Great Wagon Road: Wachovia, Bethabara, Bethania, Salem, Salisbury and Charlotte (originally Charlottesburg).

In the next blog post, The Great Wagon Road, part 2: Why the Piedmont back country in North Carolina was an empty vessel waiting to be filled. What made the settling of our landscape unique among all the colonies. And the enduring legacy of those who came south to North Carolina.

1775 “Map of the Most Settled Parts of Virginia” courtesy of North Carolina Maps.

The engraving of “The earliest known picture of a buffalo” is courtesy of the Library of Congress [3c04361u].