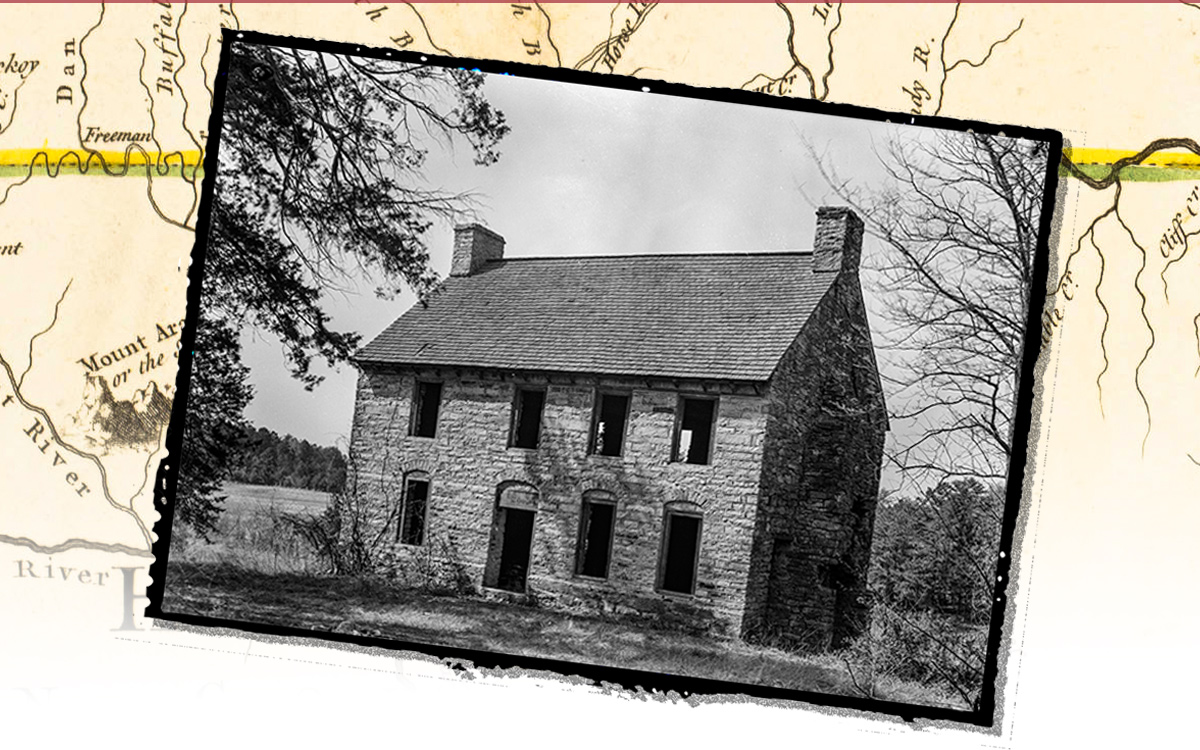 The Great Wagon Road from Philadelphia to North Carolina (and into South Carolina and Georgia) was the conduit for one of the great migrations in American history. In the mid-1700s, the road brought to our state a flood of predominantly German and Scotch-Irish colonists seeking their version of the Promised Land. North Carolina gave them what they were looking for, and they gave the colony a distinctive character that persists to this day.

The North Carolina that awaited immigrants on The Great Wagon Road

Coastal colonists wanted to push west, but they were thwarted.

The process by which North Carolina became populated was unlike that in neighboring colonies. In Virginia and South Carolina – and in most of the other original colonies – European settlers arrived by ship at the coast. They established towns, and then, as more and more immigrants arrived, began pushing west into the “backcountry.” Traveling primarily by river – there being virtually no roads into the interior – they moved farther and farther west. By violence, treaty, or sheer weight of numbers, colonists pushed the native American inhabitants back and occupied  tribal lands. Essentially, English colonization in our neighboring colonies began in coastal settlements and then spread west.

In North Carolina, however, geography thwarted that process. English, Swiss and German colonists established thriving coastal settlements at Bath and New Bern, but when they tried to push west, they were stymied. The principle cause was the nature of eastern North Carolina’s rivers. Our eastern rivers flowing to the coast tend to be oriented from northwest to southeast. Therefore a group wanting to travel west by water would actually find themselves going northwest. And when they reached the fall line, where rivers tumble out of the Piedmont and down onto the coastal plain, rocky rapids brought their water-borne progress to a halt. Unlike the other colonies, North Carolina’s rivers steered western expansion in directions the colonists did not want to go, and then obstructed progress at the fall line.

In the case of colonists attempting to travel west by land, the orientation of the rivers meant they were forced to cross major rivers rather than follow them. In an era before bridges were common even in more populated areas, crossing flowing water by river fords was often time-consuming, difficult and dangerous.

The upshot of these challenges was that by the middle of the 1700s, colonists from coastal North Carolina had only progressed as far west as Hillsborough.

A land of plenty, abandoned

Stymied in their westward movement, North Carolina’s English colonists – unlike in neighboring colonies – had not displaced native tribes in the back country. But disease did that work for them. Beginning around 1670, a handful of colonists from Tidewater Virginia had made commercial expeditions down the Great Trading Path and into Piedmont North Carolina. They brought manufactured goods to trade for deer hides. They also brought smallpox.

The native inhabitants had no natural immunity to this killer disease, and they died in shocking numbers. John Lawson, observed the native peoples of the region on his 1700 trek around North Carolina, and he reported:

…where the Europeans come, the Indians being a People very apt to catch any Distemper they are afflicted withal; the Small-Pox has destroy’d many thousands of these Natives…

The Small-Pox has been fatal to them; they do not often escape, when they are seiz’d with that Distemper, which is a contrary Fever to what they ever knew. Most certain, it had never visited America, before the Discovery thereof by the Christians. … it destroy’d whole Towns, without leaving one Indian alive in the Village.

As waves of epidemic smallpox swept through the Piedmont, tribe after tribe was reduced by half or more: Catawba, Waxhaw, Cherokee. A diminished tribe might join another group for safety from inter-tribal warfare, as the Waxhaw did when what remained of the tribe relocated south and joined the Catawba. But smallpox did not respect strength in numbers. In the early 1600s, an estimated 5,000 Catawba lived in North Carolina; in 1784, fewer than 300 remained.

By 1730, as The Great Wagon Road brought a massive immigration of European colonists into the area, there were surprisingly few native Americans still living in the Piedmont. In the west and south, the Cherokee and Catawba remained formidable, but great expanses of countryside had been abandoned. Once-vibrant villages stood empty and rotting; trails disappeared from lack of use; and prime agricultural “oldfields,” once cleared and productive, were overtaken by scrub vegetation.

And according to Moravian Bishop August Spangenburg, those Indians who remained, having seen their communities destroyed by a terrifying but unseen enemy, had lost their spirit:

It would seem that a curse were resting upon them and oppressing them.

Into this underpopulated landscape came the Germans and Scotch-Irish who had made the long journey down the Great Wagon Road. Between 1730 and 1760, that road was the single most well traveled road in the colony, if not in all the colonies.

The Moravians generally headed straight for Wachovia (Unitas), where earlier members of The Unitas Fratrum under Bishop Spangenburg had established a thriving congregational settlement. The Great Wagon Road led directly to this Moravian enclave.

Once in North Carolina, the Scotch-Irish and Lutheran Germans fanned out across the Piedmont. William Byrd, who had acquired a large tract of land along the Virginia/North Carolina boundary which he opened to Scotch-Irish settlers, described the new arrivals as approaching, “…like the Goths and Vandals of Old.”

Some immigrants left the main road to swing east into the sparsely populated region that is now Alamance County. There, they tended to concentrate in cultural clusters. German and Scotch-Irish arrivals might establish settlements adjacent to each other, but they continued to resist any interaction – much less intermingling – with anyone not of their own kind. The Germans were particularly protective of their language, which was preserved in their homes, schools and churches into the mid-1800s. Where they prospered enough to acquire enslaved people, those slaves often learned to speak German.

Scotch-Irish populated the valleys of the Hico, Eno and Haw rivers. They established a community at the oldfield known as Old Haw Fields, near present day Mebane. (Oldfields – abandoned tribal farm lands –  were highly valued properties because the back-breaking labor of clearing the land had already been accomplished by the previous occupants.) The Hawfields Presbyterian Church, established around 1755, is still active today (although the current structure is in a slightly different location).

Another stream of immigrants – many of them Lutheran and Reformed Church Germans – continued to follow the Great Wagon Road west to where it joined the Great Trading Path near present day Salisbury. From there, they pushed south into what are now Rowan, Cabarus and Mecklenburg Counties.

In 1766, in the Granite Ridge (aka Granite Quarry) area near Salisbury, new arrival Michael Braun built a fine house of native stone. There he and his family worked the land and prospered. By 1790 he had acquired 15 enslaved people. The handsome Braun House (shown at the top of this page) still stands and is maintained by the Rowan Museum in Salisbury.

In that same year, North Carolina Governor William Tryon wrote that he was:

. . . of the opinion this province is settling faster than any on the continent, last autumn & winter, upwards of one thousand wagons passed thro’ Salisbury with families from the northward to settle in this province chiefly.

What the Great Wagon Road meant for North Carolina​

The mid-1700s were a time of phenomenal growth for North Carolina, and in particular for the backcountry in the center of the state. In 1740, the colony counted a population 50,000; in 1760, it was 115,000; and by the time of the Revolution in 1776, it had exploded to 247,000. Most of that increase took place in the Piedmont backcountry, where tight-knit enclaves of Moravian Germans, Lutheran Germans, and Presbyterian Scotch-Irish dictated the culture of a particular area. Those concentrations can still be detected by clusters of ethnic surnames, by concentrations of religious affiliation,and by place names (“Dutchman’s Creek,” for example, refers to German settlers, who were commonly referred to as the Pennsylvania Dutch.)

This explosive growth didn’t mean bustling cities appeared on the landscape. At the time of the Revolution, a typical county seat in Piedmont North Carolina was a small village consisting of a frame of log courthouse/jail, a tavern, a few stores, and a small cluster of houses. In 1775, an English traveler passing through Charlottesburg (now Charlotte) wrote that the town was:

…an inconsiderable place, and in England would not be thought deserving of even the name of a village.

Be that as it may, even those in bigger cities were impressed with the rate of growth taking place in the North Carolina Piedmont.  On March 11, 1768, The South Carolina and American General Gazette in Charleston, South Carolina noted:

There is scarce any history, either ancient or modern, which affords an account of such a rapid and sudden increase of inhabitants in a back frontier country, as that of North Carolina. To justify the truth of this observation, we need only to inform our readers, that 20 years ago, there were not 20 taxable persons within the limits of the above mentioned County of Orange; in which there are now 4000 taxables. The increase of inhabitants, and flourishing state of the other back Counties, are no less surprising and astonishing.

North Carolina was forever changed. The flip side of the coin was that Pennsylvania was changed as well. Looking back of the great migration down The Great Wagon Road, the Provincial Council of Pennsylvania asked with some sense of helplessness:

Was it ever known that any people came from Virginia to purchase here on account of the superior goodness or convenience of our land? On the con­trary, have not many thousands of families gone from hence thither . . .? Have not thousands likewise left us to settle in Carolina? Have not the exorbitant price . . . of lands in Pennsylvania . . . driven these people from us? . . . But they are gone forever, and numbers are going after them!

The map used as a background to illustrate North Carolina rivers is courtesy of NorthCarolinaMaps. This invaluable source is a collaborative digitization project by North Carolina State Archives, the Outer Banks History Center, and the University Library at UNC-Chapel Hill.