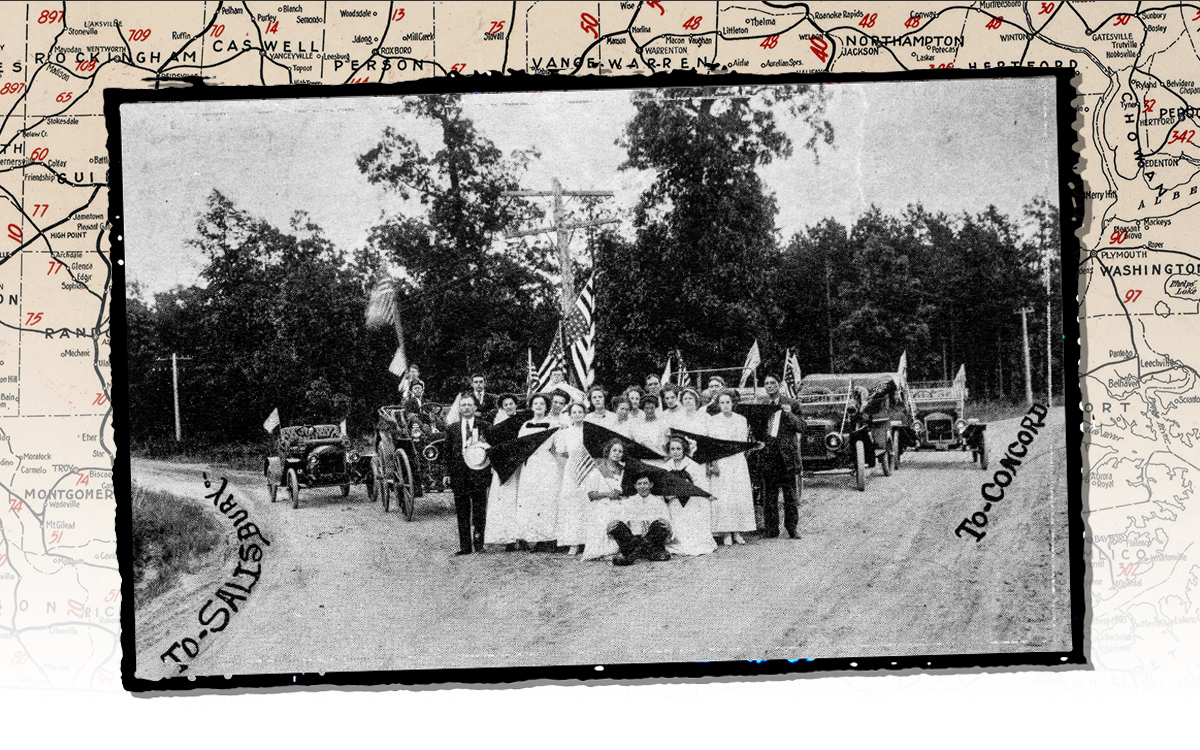 When a bicycle fad swept North Carolina between 1890 and 1900 (as it did the rest of America), bicyclists led the way in organized lobbying for better roads. The bicyclists achieved scant tangible results, but they paved the way for motorists to take up the cause.

The first stirrings of a movement for good roads for motor cars came in Buncombe County. There, as in the rest of the state, virtually all existing roads were dirt and clay.  In 1895 near Asheville, George Vanderbilt had completed construction of his magnificent Biltmore Estate. As part of the design for the estate grounds, landscape architect Frederick Law Olmsted installed three miles of hard-surface road constructed with the macadam process that was state-of-the-art road construction at the time. Local civic leaders were so impressed with the Biltmore road that they raised money to install a macadam road linking Biltmore Estate with the city of Asheville.

In 1899, convinced of the value inherent in improved roads, and eager to lobby for more and better roads in their county, residents in Buncombe County established North Carolina’s first Good Roads Association.

Regarding the need for lobbying efforts, Dr. C. P. Amber, one of the founders of the Good Roads Association, explained:

We discovered that the average citizen and farmer did not realize the advantage of good roads.

Not everyone was eager for improved roads.

What Dr. Amber himself failed to realize was that many North Carolinians were resistant to road improvements not out of naivety, but rather out of bitter experience.

When rural folk – who were not early adapters of mechanization – saw automobiles speeding by on country roads, the odds were good that those vehicles were driven by rich city-dwellers out for a spin in the country.

Farmers remembered the plague of bicyclists who only a few years before had pedaled from the city into the countryside on outings. And their collective memory harbored a litany of unwelcome behaviors. Picknickers left trash on lawns. They abused farm drinking wells. They filched produce from gardens and orchards.

When automobiles appeared on rural roads, farmers saw more of the same, those earlier sins now noisily augmented by squashed farm dogs and terrified horses. In addition, farmers felt that frivolous city automobiles tore up macadam roads, while the hard-working farmer unfairly shared the tax burden of repairing those roads. And anyway, the existing clay and sand roads were easier on horses hooves. So the traditional roads were just fine, thank you very much.

Despite resistance, strong social forces validated the mission of the good roads movement.

If there were headwinds buffeting efforts to promote good roads, there were also strong forces pushing those efforts forward.

One was the U.S. Mail. The federal government had announced that it would no longer deliver mail to areas with unacceptable roads. A second was education. Coming in with the automobile was a trend to consolidate schools, eliminating resource-starved, one-room country school houses. With fewer, larger schools, many students had farther to travel from home to classroom. A third was the fact that many small towns harbored bitter memories of economic stagnation and decline precipitated when the railroads were built, but bypassed their towns. Many local leaders were determined not to be bypassed again. A fourth was that evidence suggested being near a paved road increased the value of farm land.

In 1902, a statewide Good Roads Association was established in Raleigh. Initially, the association was apolitical, and their focus was to encourage individual counties to improve their own roads. At the time, counties bore full responsibility for the construction and maintenance of roads, and the result was a mishmash of haphazardly-built roads that often did not even connect with roads of a neighboring county.

The association’s pitch to North Carolinians was that good roads meant:

But over time, the Good Roads Association began to move beyond its focus on counties and to call for a coordinated, state-wide highway system:

We must look beyond the County line. State construction and maintenance make for broad vision and high ideals. The West should be linked with the East, the North with the South, — we should know each other better.

A complete system of State Highways will carry light into dark places, build up and improve the morals of our citizens, and induce good people to settle in our midst.

And part of becoming political was to become politically savvy. When Craig campaigned in an open motor car to make the point that he wanted modern roads, not just better wagon roads, Fred N. Tate, president of the Good Roads Association, cautioned:

Here are the Governor and the leaders of this movement for good roads riding through the state in handsome automobiles donated free by foreign corporations.

One of the main arguments our friends, the farmers, use against bond issues is on account of the automobile. They see automobiles go whizzing by, kicking up all sorts of dust on the road that they think they are taxed to a great extent to maintain, and they resent it.

Loche Craig won the 1913 election and earned the nickname “The Good Roads Governor.” But the legislature continued to stymie efforts to create a coordinated highway system administered by the state. In 1919, a promising “good roads” bill was defeated despite strong lobbying efforts from the association. Even among those who saw possible value in a state-wide highway system, there was a lingering mistrust of “centralized and professionalized authority.”

Under the leadership of Harriett Morehead Berry, the association redoubled its lobbying efforts. It waged a relentless public relations campaign that included highly visible auto caravans (as in the featured photo at the top of this page); letters and brochures to a growing mailing list; front-to-back coverage in its own “Southern Good Roads” magazine; and speaking engagements in 98 of 100 counties. In 1919, the association had lobbied the legislature and lost. In 1921, the association effectively bypassed the legislature and brought the issue of good roads directly to the people of the state.

In 1921, energized by popular support, Governor Cameron Morrison threw his weight behind the cause, and the legislature passed the Highway Bill of 1921 by an overwhelming margin in both houses. This landmark legislation removed from the counties the responsibility for road construction and maintenance, and it put that responsibility in the hands of the state. The Highway Commission assumed control over 5,500 miles of existing county roads, and the state launched into a decades-long binge of road construction.

In the 1920s, North Carolina authorized more than $175 million for road construction. It was an unprecedented era of public improvement, with the state spending more on roads than on education, health, welfare and public safety combined.

Featured photograph [PHC-25_1_243] and the “Vote Yes” photograph are courtesy of NC Archives and History.

The Biltmore road picture is courtesy of the Frances Loeb Library, Harvard Graduate School of Design.