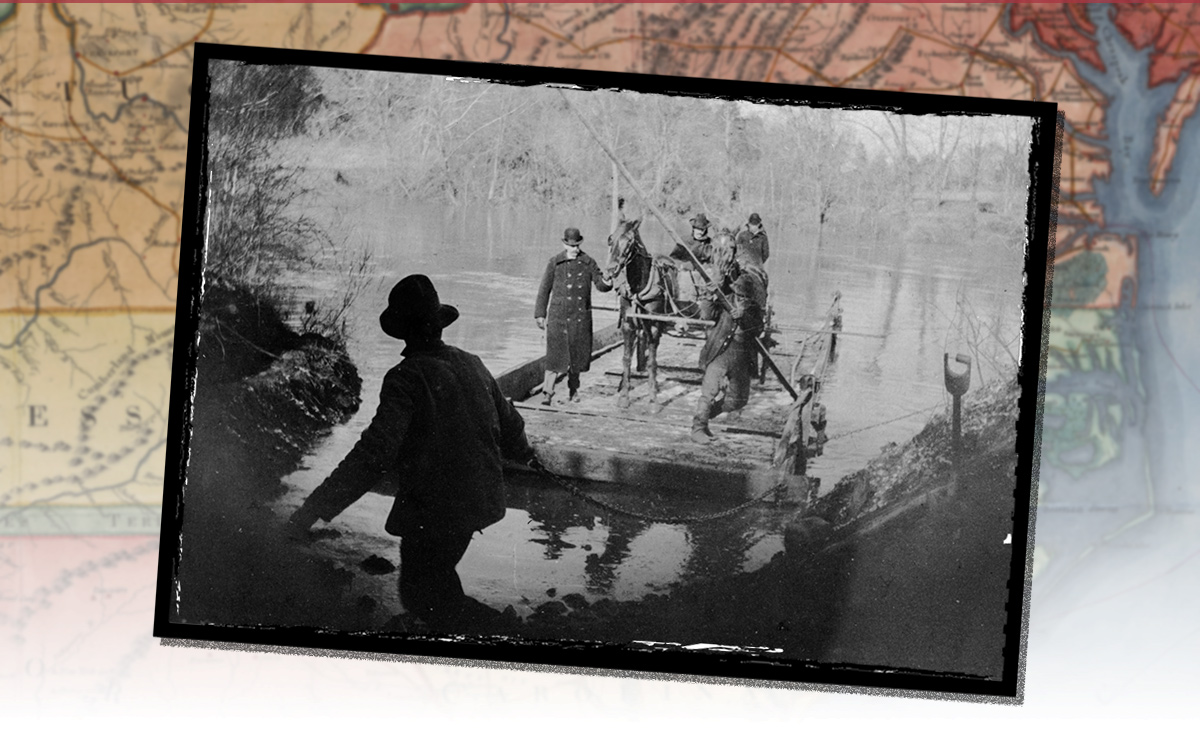 Today’s highways pass over our states many rivers on bridges so efficient that the driver is scarcely conscious of the flowing water below. But before bridges were common – that is, through most of our state’s history – crossing a river often meant relying on a private ferry. These simple conveyances – like the Cooleemee ferry across the Yadkin River, pictured above – were indispensable to travel in North Carolina for hundreds of years.

A glance at the map tells us that North Carolina is a state with no shortage of rivers. For the early traveler, crossing flowing water might have meant wading chest-deep or even swimming. Where a burden was being carried, a canoe could ferry it across. But with the arrival of wheeled vehicles – wagons became common around 1730 – crossing water often required a ford, a bridge, or a ferry. All three were vital nodes in the network of transportation, and their location was noted on contemporary maps.

Given the challenge of spanning long distances with wooden timbers, bridges over rivers were not common in the colonial era. (Steel for bridges was not widely available in the South until the late 1800s.)  And river fords existed only by a chance configuration of terrain – a broadening and shallowing of the river, the formation of sand bars, or the accretion of gravel. Fords were also subject to appearing and disappearing as physical conditions morphed over time.

But the owner of property on a river might establish a basic ferry service with little more than a boat and a rope strung from bank to bank. Well situated, a ferry could recoup its minimal expense and support the ferryman and his family.

A ferry offered a valuable service, but for the traveler, even an established ferry was not a guarantee of crossing to the other bank. In the Piedmont, after a rain, a small stream could become a fast-flowing freshet that would require the ferry to cease operation. (The same was true of fords. In 1771, Governor William Tryon was leading a military force west when he discovered that Pole Cat Creek was “too much swelled to pass over.”) Rivers could be freshets, too, but on a larger, more dangerous scale.

And for ferries crossing coastal sounds, a strong wind could put a stopper on ferry crossings. In 1754, Governor Arthur Dobbs was returning from a visit to Virginia, but when he got to Edenton, winds were so strong that the ferry across the Albemarle could not operate. He was forced to wait a full day for the winds to die down.

A ferry might be undependable in other ways as well. In the late 1600s, there was only one ferry operating regularly across the Perquimans River in the Albemarle. One Reverend Blair complained that the ferry was owned and run by Quakers, and that an overzealous operator was not permitting Episcopal missionaries to cross.

The legislature steps in to protect and to regulate

The ferry business in North Carolina changed in 1715, when English authorities overseeing the colony passed “An Act Concerning Roads and Ferries.” In recognition of the fact that the centralized colonial government found it impossible to administer transportation needs over such a sprawling area, responsibility was turned over to the local courts:

The act furthermore turned any existing road or ferry that had been authorized by the government into a public convenience.

…that all Roads and Ferries in this Government already laid our or appointed by virtue of any Act or Ordinance of Assembly heretofore made or declared…are hereby declared to be Public Roads and Ferries.

It protected existing ferries by prohibiting a new ferry within 10 miles an operating one, but it also required the operator of an existing ferry to maintain reasonable standards of equipment and operation or suffer a fine:

The legislation set tolls for ferries in North Carolina. Later, in 1766, the law would be amended to require ferry operators who charged a high fee to obtain a license for an ordinary (a tavern) and provide drink and entertainment for travelers. If the operator failed to comply, he could be sued for 10 pounds.

…all keepers of public ferries or bridges…where the ferriage or bridge toll is above 4 pence proclamation money, for a man and horse, shall be obliged to furnish all travelers with entertainment at Tavern rates and shall take out a license for that purpose.

Other ferry regulations were written into law in the colonial period: Ferry operators were instructed to grant free passage to any traveler headed to or from court; ferries connecting North Carolina with Virginia were prohibited from transporting tobacco north; and operators of those ferries were charged with making sure Virginia merchants who brought cattle to graze in North Carolina did not return home with more cattle than they brought with them.

After Independence, the state of North Carolina wrote legislation that essentially continued the ferry policies of English colonial rule, only using more words. The title of the first relevant American statute, in 1784, was, “Act to Impower the County  Courts of Pleas and Quarter Sessions of the Several Counties in this State to Order the Laying Off of Public Roads, and Establish and Settle Ferries, and to Appoint Where Bridges Shall be Built, and to Clear Inland Rivers and Creeks.

What is a ferry without a road?

Colonists had the right to petition government for the creation of a new road. In 1754, that is exactly what Moses John De Rosset did, pointing out that the local courts had authorized a ferry near Wilmington but had not created roads to the ferry site.

The Humble Petition of us the Subscribers Sheweth

That the Court of New Hanover County having some time agoe appointed a ferry from the Town of Wilmington to the Point of Marshe at the Mouth of the Thoroughfare, also another at a Place called Mount Misery on the North West branch of Cape Fear River, And the Commissioners of the Several Districts have neglected and Refused to cause roads to be made to the same, to the Great Detriment of all Travellers, as also the Inhabitants of New Hanover and the Upper Counties

We therefore pray that a Law may be passed to Oblige the Commissioners of the Several Districts adjoining the said Ferries, to cause Sufficient Roads to be made to the same, and your Petitioners as in Duty bound will ever Pray

From colonial times until almost the 1900, ferries remained vital to transportation all across the state of North Carolina – Coastal Plain, Piedmont, and Mountains. As bridge-building skills and materials improved, bridges became more common, but North Carolina – and many other southern states – lagged much of the country in building steel bridges simply because of the slow economic recovery following the Civil War. When a new bridge was built, it generally rendered a nearby ferry ferry obsolete, although it was not uncommon for a property owner who operated a ferry to build a toll bridge to replace his boat.

Click an image in the gallery below to see a description.

Ferries have been a part of the North Carolina landscape since travelers have had to cross water. Today, ferry service is largely a function of the North Carolina Department of Transportation. The state agency operates the second largest state-run ferry system in the country, the largest on the east coast. The state system of 22 vessels operating on 8 distinct routes – primarily on the waters of our broad coastal sounds – carried more than 1.5 million passengers in 2019.

In addition to its modern, sound-worthy vessels, the Department of Transportation has also continued to operate a handful of simple, cable-run ferries crossing eastern rivers. For example, the Sans Souci Ferry across the Cashie River in Bertie County has been in operation since the 1880s. The Sans Souci and a number of other private river ferries were taken over by the state in the 1930s, and these relics of our long ferry history have continued to provide services into the 21st century. Sadly, under severe budget constraints, NCDOT recently announced that it would decommission the Sans Souci Ferry this year. That decision certainly marks the end of a long era of simple ferries plying the rivers of the state, helping the occasional car avoid a long detours, and moving at a pace that, like the operation itself, harkens back to a less-hurried time.

Photograph of a modern ferry courtesy of NC Department of Transportation.