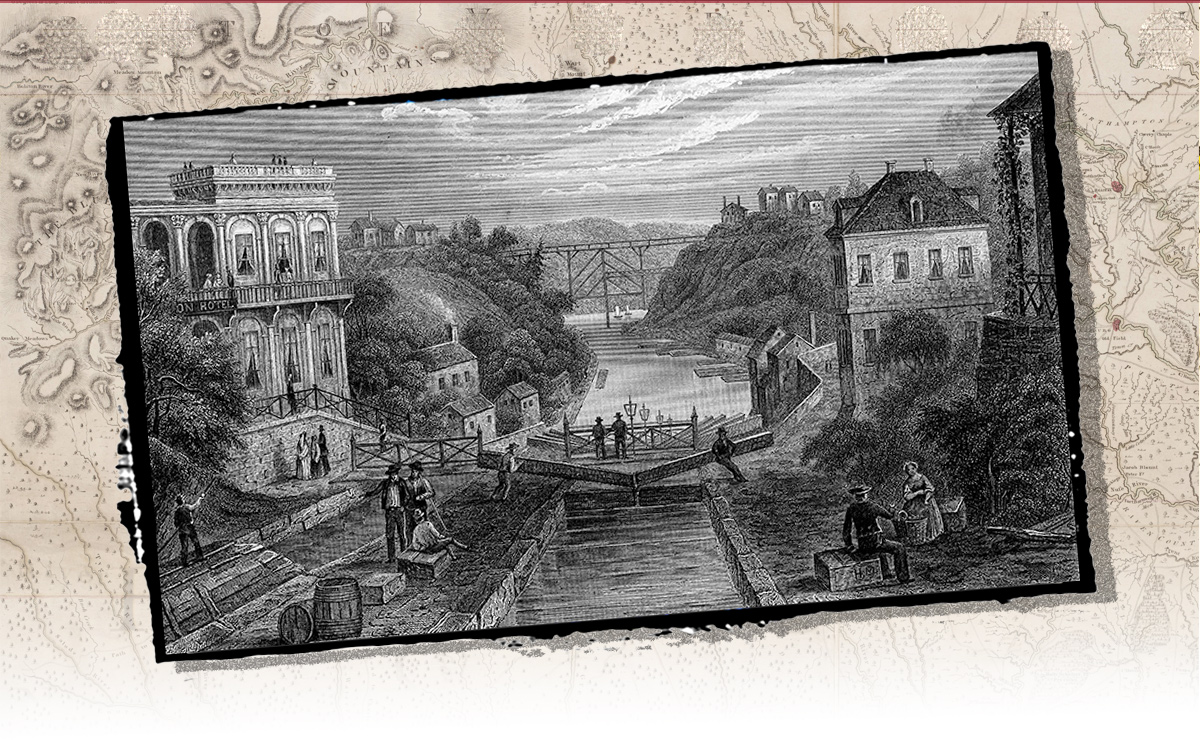 The Erie Canal across New York State was a marvel. The concept was visionary. The business plan was revolutionary. The engineering was inspiring. The Erie Canal forever changed New York State and the Midwest. It also taught far-away North Carolina lessons that helped the “Rip Van Winkle State” heal itself from crippling economic stagnation.

In a land where transportation ate the profits.

At the dawn of the 19th century, travel in America was slow going. Steam power had not yet arrived. On crude roads, wagons moved at the plodding speed of a team of oxen. On our rivers, flatboats efficiently rode the current down river, but poling the boat up river was back breaking and time consuming. A traveler leaving New York City bound for Cleveland, Ohio, a distance of 460 miles, could expect a journey of 2 1/2 weeks. Detroit  (612 miles) was four weeks away. A flatboat or raft trip down river from Pittsburgh to New Orleans took a month; the return trip upstream took four months.

And what was true for the passenger, was also true for the merchant. The average speed of a wagon was 2 miles per hour; a typical day’s progress was 20 miles. At typical cartage rates,  transportation of a bulk cargo quickly ate up any potential profit. With a bushel of wheat selling for just under $2.00, the cost of hauling it just 200 miles equaled the selling price. For corn, it only took 135 miles to eat up all the profits. And that calculation did not factor in the possibility that a perishable cargo would simply rot on its long journey to market.

For many American products already in a port city, it was cheaper to transport the goods by ship to England than it was to haul the cargo 30 miles inland.

For many in 1800 America, it was abundantly clear that any state able to create a cheap and reliable way to ship goods from the interior to the coast would benefit greatly. The state of New York set out to do exactly that with a wildly ambitious plan. A canal across the state – from Albany on the Hudson River to Buffalo on Lake Erie – would link the port of New York with the Great Lakes. From the lakes, Midwestern rivers would extend the connection all the way to New Orleans.

A plan "little short of madness"

The idea of digging a canal across the entire state of New York was met with wide skepticism. The project was derided as “Clinton’s Ditch” and “Clinton’s Folly,” referring to then-governor DeWitt Clinton, a strong supporter of the proposal. Thomas Jefferson thought the venture technically impossible. He told representatives of the project that it was “a century too soon to attempt it.” To do so would be “little short of madness.”

Governor Dewitt Clinton sees it through

Governor Clinton ignored Jefferson’s council, and in 1817 he pushed through the state legislature a seven million dollar funding package – an astronomical amount at the time. With funding in place, New York went ahead with the project, eventually scratching, gouging, chiseling and blasting through limestone, swamp and virgin forest to create a canal 40 feet wide and 4 feet deep for a distance of 383 miles.

Fifty locks were required to compensate for the 600 foot increase in elevation between Albany and Buffalo. At places, instead of locks, variations in terrain were dealt with by elevating the canal on aqueducts – one more than 800 feet long. The extraordinary labor for the project was provided mostly by recent Irish immigrants. Most Irish men crossing the Atlantic at that time landed at New York, convenient to the canal, and many of them had experience as navvies working on canals in England and Europe. (The term “navvy” referred to a common laborer who worked on canals, or “navigation” improvements.)

Success by any benchmark

When the Erie Canal opened in 1825, it was an immediate success by almost any benchmark. It was the longest canal in the world. It dramatically reduced the time and expense of travel from New York City to Buffalo, resulting in a wave of migration as settlers flocked to the trans-mountain Midwest. With the canal, they were able to make a water-borne end run around the formidable Allegheny Mountains – a physical barrier that nearly 100 years earlier had forced western migration south down the Great Wagon Road.

There were also many who never made it beyond the mountains, electing to settle along the canal, where they created the cities of Schenectady, Utica, Syracuse, Rochester and Buffalo. Today, over 80% of the population of upstate New York lives within 25 miles of the canal.

Nowhere was the effect of the canal more dramatic than in the shipment of goods. Cargo that once cost $100 to haul by wagon now cost $10 to transport by canal boat. And within a few years, that cost would drop to $4.  Before the canal, shipping a load of flour from Buffalo to New York City would have cost 300% of the cargo’s value; with the canal, shipping cost 10% of value.

A swelling tide of agricultural products streamed through the Erie Canal and down the Hudson River to the seaport at New York City. In 1829, 3,500 bushels of wheat passed through the canal; by 1837, that had risen to 500,000 bushels. In the first year of operation, 2,000 boats, 9,000 horses, and 8,000 men were involved in canal transportation. By 1845, a million tons of cargo used the canal each year.

By shipping out this bounty, New York City became the premier American seaport, handling more tonnage than Boston, Baltimore and New Orleans combined. It was a position of dominance the port of New York would not relinquish for generations.

Years after the Erie Canal began operation, Thomas Jefferson admitted that he had misjudged the possibilities. He wrote that the state of New York had “anticipated by a full century the ordinary progress of improvement.”

The Erie Canal was far removed from North Carolina, but its impact here was great. The canal was a marvel of engineering for its day, a fact made all the more notable because the two men who designed it had never seen a canal when they began the work. America had no civil engineers at the time, so the project required immense on-the-job learning. But learn they did, and others – including those in North Carolina lobbying for canals – benefited from their practical education.

A new role for government

Engineering lessons aside, the Erie Canal’s enduring impact on North Carolina came from its progressive business plan. The New York legislature made available seven million dollars in funding for the canal at a time when government involvement in a private infrastructure project was virtually unheard of. The traditional theory was that infrastructure ventures were for private companies and their citizen investors. The sole role of government, it was widely believed, was to grant charters to those private companies. New York turned that theory on its head by funding the Erie Canal exclusively with state dollars.

In North Carolina, progressive voices were calling for government funding of turnpikes and canals, but a long-running  debate over internal improvements seemed to be an eternal standoff. With funding restricted to private stock offerings, many infrastructure projects received charters, but few came to fruition. North Carolina’s economy was in such a long-term stagnation that the state earned a derisive nickname, “The Rip Van Winkle State.”

When New York State made its bold gambit with the Erie Canal, North Carolina eyes turned north to see how it would turn out. Many predicted that the state of New York would simply loose its entire investment made in unwise speculation; that state’s bad bet was bound to go wrong.

Events unfolded to the contrary: the canal was so successful that within 9 years, enough toll revenues were collected to repay all construction costs. In fact, with the debt retired, in 1882 tolls were abolished completely. And the state had benefited in other ways as well. Between 1820 and 1850, New York State’s population quadrupled from 125,000 to 500,000, and its port city became a powerful engine of commerce.

North Carolina's canal across the state ran on rails

North Carolina never seriously contemplated – much less attempted – a canal on the scale of the Erie Canal. With notable exceptions such as the Dismal Swamp Canal, most of the canals in North Carolina were not point-to-point canals, but rather, like the Roanoke Canal, projects designed to improve river navigation.

But the principal lesson taken from the Erie Canal had little to do with a specific mode of transportation. The important take-away was that government could play a fiscal role in encouraging internal improvements. And that new infrastructure could, in turn, bring great economic and social benefits to an entire region.

There was much talk in North Carolina in the early 1800s about the need for canals to improve transportation, but there was little likelihood of an Erie-Canal-like ditch across our state. On the other hand, when a newer technology steamed onto the scene to challenge the efficiency of canals, the state was ready – at least in a modest way – for government to be supportive with funding. North Carolina never got a mega-canal, but it did get a North Carolina Railroad across the state. And that railroad proved to be a powerful force in lifting the state out of economic lethargy and in shaping the North Carolina that we know today.

An aside about political humor on the canal: In the picture above of mules towing a barge, notice how low the bridge is. There were many like that on the Erie Canal, and it was the responsibility of the boatman to shout a “heads down” warning to keep passengers from smacking their heads as the barge passed under the bridge.  One traveler told of a boatman – apparently an Andrew Jackson supporter – shouting, “Jackson men, heads down!” All passengers, regardless of personal politics, had to choose between seeming to be with Jackson or receiving a nasty blow to the head.