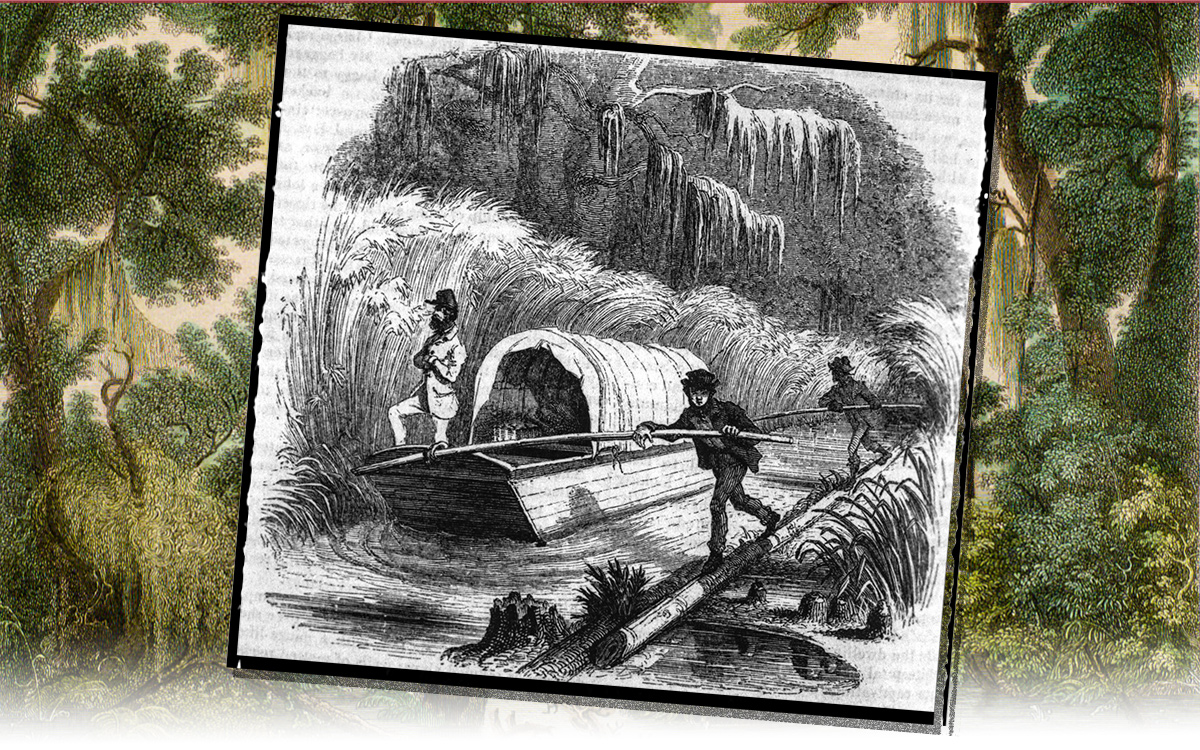 [For the first part of this story, see The Dismal Swamp Canal – Genesis.]

On paper, the plan for a canal worked fine.

In November of 1790, the North Carolina legislature passed authorization for a canal connecting the Albemarle Sound with the Chesapeake Bay.  (Virginia had passed similar legislation three years earlier.) North Crolina chartered the Dismal Swamp Canal Company to accomplish the tasks of funding and excavating the canal.

Under the plan, Virginia and North Carolina granted each other free passage through the canal (and on connecting rivers) with no restrictions or tariffs on any commodity that was a product of either of the two states. Authorized tolls were set for both the canal and the road beside it. Specifications called for a 22 mile canal linking South Mills NC with Deep Creek VA. In combination with the Elizabeth River in Virginia and the Pasquotank River in North Carolina, the Dismal Swamp Canal would connect the Albemarle Sound with the Chesapeake Bay.

Design specifications called for a canal 32 feet wide at 8 feet below grade, navigable in dry weather by vessels with up to 3 feet of draft. The causeway next to the canal would be 20 feet wide. Construction was to begin within a year, and it was to be completed within 10 years. Owners of land in the canal right-of-way were required to sell such land to the Dismal Swamp Canal Company at a reasonable price.

The canal would be funded through a combination of public and private money. George Washington, one of the first subscribers, purchased $500 in stock. The state of Virginia acquired 50 shares, while North Carolina – still wary of using tax revenues to improve the state – purchased none.

Actual construction of the Dismal Swamp Canal began in 1793, sixty-three years after William Byrd had ruminated on the possibility of such a connection.

A total want of engineers

The Duke de la Rochfoucald-Liancourt, touring the Great Dismal Swamp after canal construction had begun, commented on the lack of engineering underpinning the effort:

What must appear surprising, is that, for this canal which already seems in such a state of forwardness, no levels have been taken. It is not yet known what number of locks may be necessary, and even whether any will be requisite. Consequently it is impossible to ascertain what may be the expense of completing it, or even whether the success of the undertaking can be depended on. It is thus almost all the public works are carried on in America, where there is a total want of men with talents in the arts.

So there you had it, the several fundamental issues working against a smooth trajectory for the project. First, no competent engineer was engaged to supervise the work. (In truth, America had no civil engineers at that time. Our few trained engineers were military engineers, and a canal is not a fortification.) Second, there was no understanding of the number of locks that the canal would require. And third, construction began with no accurate estimate of what the canal would cost.

When it came to actual physical labor, enslaved people did most of the heavy lifting, rented out to the project by local land owners. Although contract laborers were also taken on. A solicitation for workers in the Norfolk Gazette and Public Ledger promised workers “…good wholesome food and the usual quantity of whiskey per diem.”

Through such land, the canal, to the depth it was sunk, was cut, not by the spade, but principally by the axe, the saw, and the mattock.

Excavation proceeded from the ends to the middle.

The project design called for work to start at both ends of the canal and meet in the middle. But after 3 years of hard labor, only 5 miles were completed on the Virginia end and 6 in North Carolina. With funding exhausted, the Dismal Swamp Canal Company discontinued major work on the canal and opted to build a road through the swamp to connect the completed canal sections.

With road traffic generating toll revenues (wagon $.50, man & horse $.12.5, each hog or sheep $.02), piecemeal work resumed on the canal as funds became available. And by 1805, the waterway was complete enough such that flat-bottomed boats were able to make the entire transit. Although four miles of the canal were but half the width they were designed to be.

Not everyone celebrated the completion. In 1808, one exasperated shareholder wrote an open letter to the Dismal Swamp Canal Company:

You have marked the course of the canal it is true – you have made an indifferent road, and a boat can swim empty four or five miles in the center of the Dismal Swamp! All this you have performed in little more 16 years!

Added incentive came in 1812, when war broke out between the United States and United Kingdom, and the British navy clamped down on coastal shipping. An enlarged canal would offer a protected water connection between the Albemarle Sound and the Chesapeake Bay, and improvements were undertaken.

In 1814, work on the canal was completed, and although it was still “little more than a muddy ditch,” the first true sailing vessels passed through the swamp. In June of that year, a 20-ton vessel carried a cargo of bacon and brandy from the Roanoke River through the canal to Norfolk.

The Dismal Swamp Canal made a splash...

The Dismal Swamp Canal would undergo further improvements over the years, but it would eventually be rendered obsolete by a larger waterway, The Albemarle & Chesapeake Canal, and by a newer transportation technology, the railroad.

There was no shame in that. The Dismal Swamp Canal had accomplished its goal of connecting planters of northeast North Carolina with the seaport at Norfolk and thus with markets beyond. On that count, it was a success, stimulating the economic prospects for many North Carolina farmers.

The road and canal… are like the streets of a populous city; they are crowded with people from end to end, and the traveler is never alone. An enormous amount of produce goes over this canal; and it is perhaps the best stock in he world.

... but with the splash came unhappy ripples.

There were, as always, winners and losers. Booming trade made North Carolina plantation owners and farmers along the Roanoke River clear winners. The port of Norfolk boomed, while the ports of New Bern and Edenton saw their shipping trade decline as goods diverted north through the new canal. Edenton, in effect, was transformed from a shipping center to a fishing community. In 1830, an Edenton newspaper said the canal, “…was to North Carolina a blood-sucker at her very vitals.”

In essence, the conservative voices of 1790 had been right: Nofolk had prospered, while once-bustling North Carolina ports had become quiet fishing towns. But many in North Carolina had also prospered. Opinion depended, as usual, on whose ox was being gored.

Recall that the plan for a canal required land owners to sell land to the canal company for a reasonable price. Some would say that “reasonable” in this context meant reasonable to those who wanted the land. In 1812, The Dismal Swamp Canal Company decided to move ahead with a plan to cut a “feeder ditch” to boost water levels in the canal by siphoning water from Lake Drummond. On August 4th, the local Sheriff and a hand-picked group of citizens appraised the land required for the plan – a strip 300 feet wide and 3.5 miles long – and assigned a “reasonable” value at one cent per acre. The canal company paid the owner one dollar and a quarter, and they dug their ditch.

There were environmental ripples as well. The canal degraded large parts of the landscape it passed through by altering drainage and causing damaging floods. And before long, ripples of change reached Albemarle Sound. Historically, Atlantic Inlet had connected the sound with open ocean, maintaining the sound as a salt-water environment.

In 1828, water use by the canal caused Atlantic Inlet to silt in and close. Cut off from Atlantic waters, the sound changed from salt-water to fresh, a change highly disruptive to the critical businesses of oystering and fishing.

The canal lives on

Today, the Dismal Swamp Canal lives on as possibly the oldest existing excavated waterway in America. The grand Erie Canal in New York is a much more impressive from an engineering standpoint, but it is a relative late-comer to the canal party, construction not having started until 1817.

Information on visiting the canal is available at the Dismal Canal Welcome Center.

Photo of the tangled landscape of the Dismal Swamp courtesy of the Library of Congress.

Photo of the canal today, courtesy of the Dismal Canal Welcome Center.

I highly recommend Bland Simpson’s The Great Dismal, A Swamp Memoir. There is lots in the book about the canal, but also about much, much more. The New Yorker called Bland’s book “A jewel of natural and human history.”

Coming Down The Road