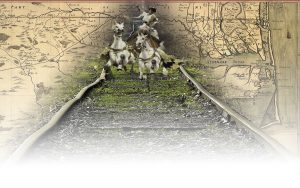 Railroad track gauge is the distance between the two rails. In the United States today, the standard is set at 4 feet, 8 1/2 inches. That measurement was also almost exactly the standard distance between the wheels of Roman chariots. The similarity has led some to conclude that the current standard was passed down from Roman times. The story is actually much more interesting than that simple telling.