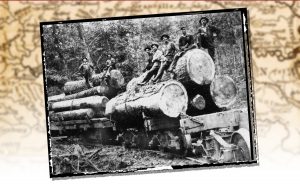 Both indigenous peoples and early European colonists in North Carolina cleared farmland. But their impact on the seemingly endless forest was miniscule. Later, when the woodlands became the basis for thriving export business in naval stores, oak lumber, and shingles, the scale of deforestation jumped significantly. And yet it still seemed as though the forests were so vast they could never be used up. But a century of steam power – especially in the form of railroads – would call that confidence into question. 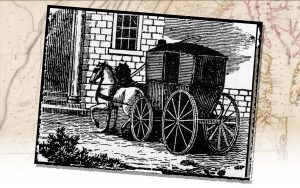 In the western movies many of us watched as kids, stagecoaches would glide across a majestic landscape with passengers jostled just enough to suggest motion. Those who traveled in real stagecoaches described a very different experience. 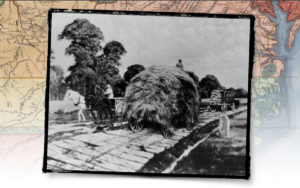 In the mid-1800s, North Carolina burned with an acute case of plank road fever. By lifting travelers above the omnipresent ruts and mires, wooden turnpikes promised to speed travel, to stimulate commerce, and to bring big profits to the companies that built and owned them. How could it fail?