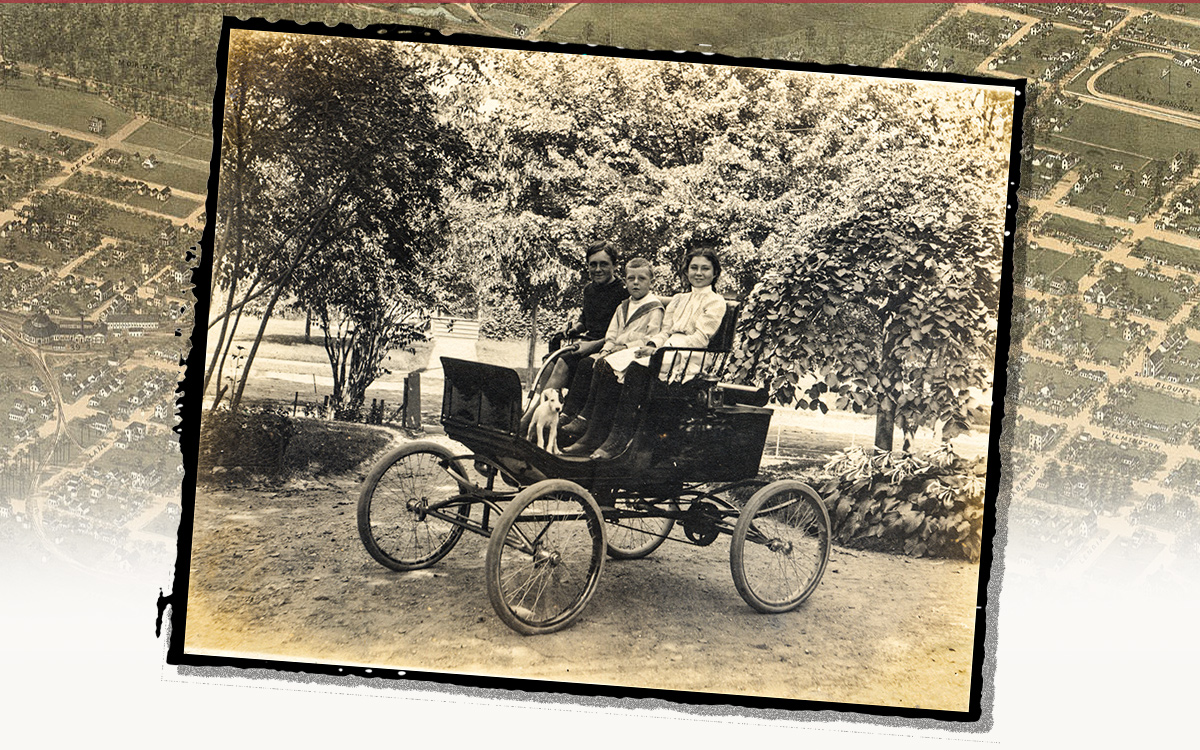 When automobiles started appearing on US roads around 1900, the technology for a steam powered automobile had already been around since the late 1700’s. Clean, quiet, and powerful, steamers like the Stanley model above led the United States market for motor carriages.

The steam powered automobile was road tested and elegantly simple.

Even in 1900, steam powered automobiles were no Johnny-come-lately technology. In 1787 Delaware, a patent had been awarded for a steam powered land vehicle. And in 1857, a steam powered bus was road tested in New York State. US firms manufacturing steamers before the dawn of the 20th century included Clark, Locomobile, and Stanley.

Compared to automobiles powered by the relatively new gasoline-fired internal combustion engine, steamers were trusted, clean-running, and straightforward. The Stanley Steam Motor Carriage Company in Massachusetts boasted that its automobile had “Only 32 moving parts in the complete vehicle.” (This marketing boast of mechanical simplicity is being rejuvenated by today’s manufacturers of electric vehicles.)

It was true that a steamer took a while to get going. You didn’t just hop in the car and hit the road. Before setting out, the driver had to check the water level in the boiler, prime and ignite the kerosene heater, and wait up to a half an hour for pressure in the boiler to come up to operating level. (The Stanley Steamer earned the nickname “The Flying Teapot.”)

And driving range was short. After 25 miles or so, the driver would have to stop at a water source to refill the boiler. A standard accessory for a steamer was a bucket, so that the driver could tote water from a well or a stream. Kerosene for the heater could be bought at any hardware, grocery, or drug store.

But despite the vehicle’s limitations, in 1900, 40% of all motor cars registered in the United States were powered by steam. 38% were electric, and 22% were powered by gasoline engines. For power and speed, you couldn’t beat a steamer.

The Stanley "Rocket" steams to a world land speed record.

In January of 1906, on the hard-packed sands of Ormond Beach, Florida, a crowd gathered to gape at an odd-looking motor carriage. At 16 feet in length and only 3 feet wide, the vehicle didn’t look like any they has ever seen. To many, it looked like an inverted canoe on wheels. But when driver Fred Marriott opened the throttle, the Stanley Steam Motor Carriage Company’s “The Rocket” covered the mile-long straight course in 28.2 seconds, or 127 miles an hour. “The Rocket” had shattered the world land speed record. And that was 127 miles per hour in an era when the vast multitude of people still traveled at the speed of horse and buggy.

Steam powered automobiles were not as common in North Carolina as in other places, likely because they were expensive compared to electric and gasoline models. In 1900, a steamer cost around $850; even by 1926, the average North Carolina income was only $1,700.

But there are records of a few North Carolinians who gathered inspiration from steam.

In 1880 Samson County, a cotton farmer named Peregrine Cook mortgaged his crop and used the $200 he received to build an 8 horsepower steam engine. Once he had it running and was satisfied that the project could be done, he dismantled the contraption and got back to his farming.

In 1900, Gilbert Waters, an New Bern buggy maker, was on a visit to Baltimore. On the city streets there, he saw steam powered vehicles, the first self-propelled vehicles he had ever witnessed. When he returned home to his buggy shop, he created a gas powered vehicle he christened “The Buggymobile.” Gilbert’s banker educated him to the fact that, “Buggies without horses will never be practical.”

Also in 1900, a Stanley steamer called the “Locomobile” visited Asheville on a promotional tour for Colgate’s Octagon Soap. The March 12, 1900 Asheville Citizen-Times trumpeted the event:

The newest steed turned up in Asheville this morning. It doesn’t shy at trolley cars, and it stands anywhere without hitching… (Its) appearance attracted attention like unto that won by one of the swarm of ‘funny farmer bands’ we have had here lately.

One of the Asheville citizens whose attention was attracted was Eugene Sawyer, owner of the Asheville Cycle Company. Eugene’s brother Clarence, a grocer, actually got to drive the Locomobile up and down Patton Avenue, achieving a speed of 30 miles per hour.

Eugene got a closer look at the contraption nine days later when the Octagon representative driving the car skidded into a curb (understandable, at those high speeds), flipped the auto, and damaged a wheel. With no automobile garages in town, the car was taken to The Asheville Cycle Company for repairs.

Inspired by the Locomobile’s self-propulsion, Eugene Sawyer fabricated his own gas-powered vehicle. He sold his creation to Rutherford Platt Hayes, a local farmer and son of U.S. President Rutherford B. Hayes. The younger Hayes drove the automobile for a while, then converted it into a mower to cut hay. The vehicle met its end when, as the Citizen-Times reported, the governor that controlled vehicle speed, “became detached, and the thing took off across the country and destroyed itself.”

Steam powered automobiles had their day, but those days were not to last. Steamers had always been more expensive than electric and gasoline cars, but when Henry Ford implemented his mass production system, the gap widened dramatically: the cost of a Model T Ford was driven down to around one sixth the cost of a steamer.

But it was a simple technological advance that was most devastating to steam powered automobiles. A serious concern for internal combustion engine (i.e. gasoline powered) automobiles had always been the need to start them by the use of a hand crank. It was not easy work at any time, and for an inexperienced or inattentive driver, it could be dangerous. When the engine fired, it could spin the metal crank to wallop the forearm of the operator. (On a personal note, I once used a crank inexpertly to start an old MG sports car, and the driven crank left a nasty bruise on my lower arm.) With the invention of the electric starter, a strong disincentive to purchase a gasoline powered car disappeared.

The steamers fought back. The Stanley Steam Motor Carriage Company ran a series of advertising campaigns stressing the inherent danger in the “internal explosion engine.” Their advertising slogan was, “Power – Correctly Generated, Correctly Controlled, Correctly Applied to the Rear Axle.”

But it was all for naught. The heyday of steam powered automobiles was over, and by 1910 gasoline powered cars reigned.

Photos courtesy of the Stanley Museum.

For anyone interested in this state’s early history with automobiles, I recommend Robert E. Ireland’s book “Entering the Auto Age, The Early Automobile in North Carolina, 1900 – 1930″.

An interesting epilogue to the 1906 land speed record: The next year, Fred Marriott attempted to best his own record in an improved version of the same Stanley motor car. He was clocked at 150 miles per hour when his vehicle hit a rut and went airborne, breaking in half on impact. Marriott was injured but survived. Because he had not completed his run, the recorded speed was not official, so the 1906 record stood. Marriott would not make another attempt on the record. The 1906 speed record for a steam powered automobile was finally broken in 2009 – after 103 years – when an English team under Charles Burnett III was clocked going 139 miles per hour at Edwards Air Force Base in California.