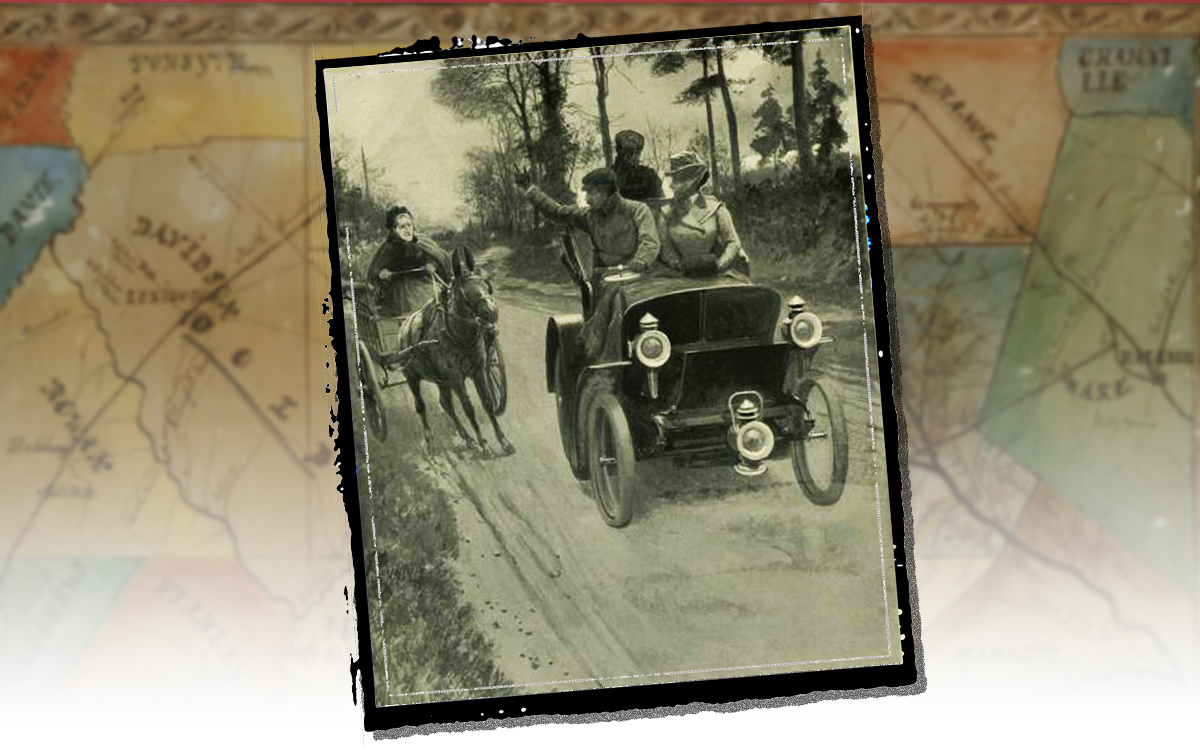 Speed limits imposed on those who use public roads are not a modern phenomenon, much less a by-product of the automobile. Horses sped, too. But the early-1900s proliferation of autos on our roads – and the terror those noisy, lurching machines inflicted on the animals that had dominated the roads for 300 years – certainly brought a new sense of urgency to requiring people to refrain from “driving furiously.”

Long before there were states united as a single country, civil authorities in the new world found it necessary to decree speed limits on public roads. In 1652, the Dutch colony of New Amsterdam – the lower tip of what we now know as Manhattan in the State of New York – enacted a law prohibiting wagons and carts from being driven at a gallop. The fine for violation of the law was set at “two pounds Flemish,” or about $150 in today’s currency.

And fifty-ish years later, in 1701, the Board of Selectmen (the city council) for the city of Boston in the British colony of Massachusetts enacted an ordinance not only limiting equine speed but authorizing citizen to detain any one who violated the law:

Ordered, That no person whatsoever shall at any time hereafter ride or drive a gallop or other extreme pace within any of the Streets, lanes, or alleys in this Town on penalty of forfeiting three Shillings for every such offense, and it may be lawfull for any of the inhabitants of this town to make stop of such horse or rider until the name of the offender be known in order to prosecution.

An English speed-limit ordinance some years later would use the charmingly descriptive phrase, “driving furiously.”

The railroad shattered the speed barrier at a shocking 15mph.

With the arrival of the railroad around 1830, the speed of transportation jumped to then-inconceivable levels. A passenger on the 1830 inaugural run of the Charleston & Hamburg Railroad rhapsodized:

We flew in the wings on the wind at the varied speed of fifteen to twenty five miles an hour, annihilating time and space.

Riding at that speed was no doubt exhilarating, and it was courageous, too. Respected medical authorities at the time cautioned that humans traveling over 10 miles per hour could suffer brain damage. But at least the speeding locomotive was confined to its own tracks and not turned loose on the public byways.

As automobiles started to appear in the very late 1800s, the speed of the railroad was suddenly liberated from dedicated tracks and thrust onto public streets and roads that were still traveled by the same slow-moving traffic that had used them for over 300 years: horse and rider, ox cart, buggy, wagon, and pedestrian.

Auto and beast sharing the road was problematic from the start because even at slow speed, early autos were noisy, lurching machines, and horses tended to be terrified of them. That led to a fraught coexistence on the roads. If it was bad in town, where the driver of an early auto might parade his new toy down main street, it was worse in the countryside, where rural roads tempted many drivers to “see what the machine would do.” And as roads improved, the problem only got worse.

From the time the first autos hit the road, local authorities had to ponder the question of what was a reasonable speed for the new machines. Many people started with the assumption that an automobile in town should not be allowed to move faster than a horse. And that would be a walking horse, not one spurred to a gallop of “furious driving.” That meant a rate of approximately 6 miles per hour. And while that seems to us to be painfully slow, it was wild-eyed liberalism compared to an English statute that set speed limits a 4 mph on rural roads and 2 mph in town.

Naturally, auto owners exerted what pressure they could to be allowed to drive faster, especially on country roads. But North Carolina at the time – as with most of the United States – was a very rural state. That meant that authorities at both the local and state level were closely tied to farm life, and they had a great deal of sympathy for the farmers who were complaining about speeding vehicles.

As authorities around the country wrestled with appropriate speeds, they began to codify what they deemed responsible driving. the state of Connecticut framed one of the first automotive speed limit laws in 1901, when it decreed that motorists were not to exceed 12 mph in the city and 15 mph on country roads. But even as late as 1930, 12 states had no speed limits at all. In fact, 28 states did not even require a driver’s license.

In North Carolina, motor vehicle laws began to take effect shortly after vehicles like Gilbert Waters’ Buggymobile appeared on the roads. In a pattern typical around the country, North Carolina speed laws started with local ordinances and then escalated to state legislation.

In 1902, when Fletcher Waynick of Reidsville built a gasoline engine and mounted it to a buggy, the town’s leadership passed an ordinance to limit the only car in town’s terrifying effect on local horses. They may have felt pressure from the Methodist minister who, when Waynick’s auto passing by the church distracted the congregation, scolded the driver for operating “an instrument of the devil.”

In 1907, the legislature enacted the first North Carolina state law regulating automobiles. It stated that “… All persons riding on bicycle, tricycle, tandem bicycle, locomobile, automobile or other motor vehicle” keep to the right and not exceed 6 mph in built-up areas or business districts. Elsewhere in town, the speed limit was 10 mph; outside of town it was 15 mph. For sharp curves or “crossings” in town, the limit was 4mph. (Alabama at the time limited vehicle speed to 8 mph.) The penalty for violation of the law was set at a maximum of $50 or three days in jail.

Two years later, a new version required the publication of all registered automobile licenses so that local sheriffs could track down scofflaws. This 1909 law also set out that, with the exception of private race tracks…

…in no case shall a person operating a motor vehicle in this state when intoxicated, or in a race, or on a bet or wager, or for the purpose of making a record.

By 1912, the town of Davidson had established a speed limit of 12 mph for horses, mules, and automobiles. It was reported that on one day a town policeman took down the license numbers of 40 offending drivers. There is no record of a mule being cited for exceeding the 12 mph speed limit. I guess some are just naturally more law-abiding than others.

In 1913, in addition to taking over responsibility for making license plates (previously, auto owners were required to make their own) state law specifically excluded police wagons, fire wagons and ambulances from speed limits.

It is worth noting that today’s reality of traffic flowing at a speed slightly above the posted speed limit is not a modern phenomenon. In 1915, an editorial in the High Point newspaper reasoned as follows:

The council has amended the automobile ordinance, increasing the speed limit in the business district to nine miles per hour. In practice, under a fairly liberal interpretation of the law, the speed, no doubt, will be 10 to 15 miles per hour, and this is about right.

One concerned (and dusty) citizen's plea...

Even though a speed of 10 to 15 miles per hour might have been “about right” to the editors, there were obviously some who insisted on motoring faster. Such behavior prompted Mr. W. A. Ellington of Pittsboro to write the following plea published in the August 11, 1921 edition of the Chatham Record newspaper:

As the folks at the Chatham Historical Museum – who brought this squib to light – point out, Mr. Ellington’s math does not hold up. Possibly the “500 yards” mentioned in the first line was a typo, and he really meant “300 yards.” That would, indeed, have made the motorists travel 600 yards in one minute.

But arithmetical quibble aside, who among us can doubt that Mr. Ellington was covered with dust, and that motorists driving furiously at 20 miles per hour were to blame?

My go-to source for the story of the early years of the automobile in our state is Robert E. Ireland’s Entering the Auto Age: The Early Auto in NC 1900 – 1930
(The University of North Carolina Press).

Here is a link for NC Department of Transportation information on current state speed limits.