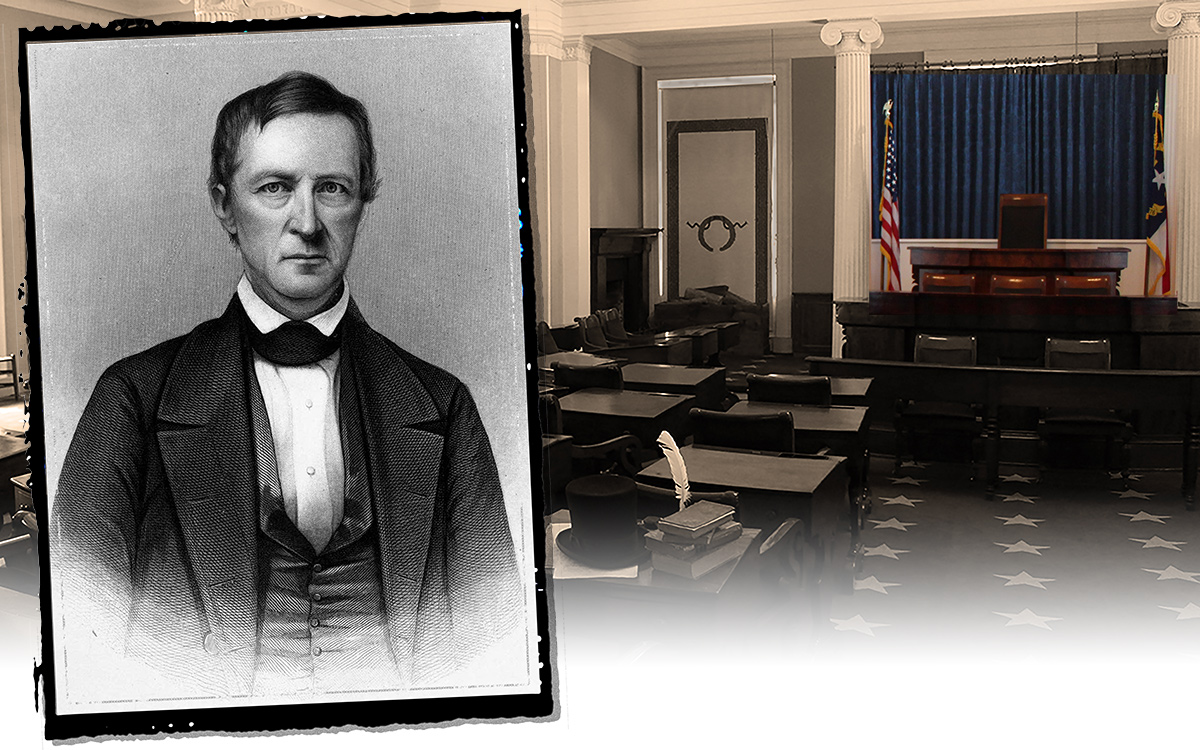 In 1840s America, new railroads were cropping up all over the country, galvanizing the economy wherever their tracks ran. In North Carolina, nearly everyone wanted a railroad, but the devil was in the details. Where should it run? Should it be public or private? Should people who didn’t live along the route still have an interest in it? When an ambitious bill to charter a state-wide North Carolina Railroad came before a polarized NC Senate, the resulting vote was deadlocked. In a room hushed with uncertainty, Calvin Graves, Speaker of the Senate, rose from his seat on the dais to cast the deciding vote.

Although North Carolina state government had begun helping to fund “internal improvements” such as plank roads, canals and railroads, there were many die-hard Democrats – the Democratic Party being the staunch conservative voice of that day – who still objected on various principles.

Some saw government involvement as manifestly unconstitutional. Government’s only legitimate role was to charter private companies to undertake such projects.

Some planter-class Democrats were horrified by the specter of burgeoning commerce: “Whatever enables the cunning to live on the labor of others is evil.” Plantation agriculture good; commerce and industry bad.

Still other conservatives thought the only proper use for tax revenues was to pay down the state’s debt. Dr. Thomas H. Hall, elected from Edgecomb County to the U.S. House of Representatives, had captured that sentiment some years earlier. When it was suggested that the state of North Carolina contribute toward funding an Outer Banks Canal, Hall demanded:

What in God’s name are we coming to in this country? …Do my fellow citizens really wish me to give away their money to every applicant, for whatever purpose? … Let the money be applied to pay the public debt and then reduce the taxes – this will do more public good than all this idle expense upon internal improvements, or anything else.

But by the 1830s, the Whigs – the progressive party of the day – were were winning the battle for public approval of state involvement in public works. In 1838, an Internal Improvements Convention in Raleigh captured the Whig voice:

Again, we ask, can you hesitate? We tell you the spirit of improvement is abroad in the land – to burst the shackles of a jealous and short-sighted policy, to rise triumphant over physical obstacles and the still stronger mounds of local prejudice, and by your actions to elevate our beloved state to her proper rank as one of the political members of this great confederacy, and let her shine with a new light amid the states of our national galaxy.

1850 North Carolina already had two railroads: The Wilmington and Weldon, and the Raleigh & Gaston. Both connected eastern NC traders with the bountiful Roanoke River valley and with Virginia railroads that serviced Norfolk and northern markets.

Western interests felt left out of the railroad boom. Neither of North Carolina’s railroads helped them at all. As a remedy, Rufus Barringer of Concord and John W. Elias of Salisbury proposed a western railroad. A line from the south already reached Charlotte, and a line from the north terminated at Danville, Virginia. The western proposal would link those two points, connecting western North Carolina with markets north and south. Furthermore, to sidestep anticipated stonewalling from the east, the proposal called for the western railroad to be funded entirely with private investment. No permission from the legislature would be asked for, much less needed.

Eastern interests were deeply concerned. They believed such a railroad connection would allow South Carolina and Virginia to “steal” North Carolina products that should rightly go to the state’s own ports. As a counter-proposal, easterners suggested a railroad from Charlotte to Raleigh. This was essentially a revival of  Joseph Caldwell’s 1827 visionary call for a railroad across the entire state. That call had come to naught at the time, only opening the door for two tiny experimental railroads. But nearly a quarter century later, here was Caldwell’s proposal on the table once again.

Eastern interests agreed on a cross-state railroad, but a kerfuffle erupted as to where the eastern terminus would be located. The view from Wilmington was that a line ending in Raleigh would connect with the Raleigh & Gaston Railroad and would simply be another route over which to shuttle the products of western North Carolina into Virginia.

As a compromise, it was agreed that the east-west line would extend past Raleigh to Goldsboro, where it would connect with the Wilmington & Weldon Railroad. Thus, western products could be routed to the state’s principle seaport.

That settled, W. S. Ashe, a Democrat from New Hanover County proposed a legislative bill that would charter The North Carolina Railroad connecting Charlotte and Goldsboro.

On January 18, 1849, after weeks of acrimonious debate, the measure came to a vote in the North Carolina House of Representatives. It was passed on a vote of 60 in favor and 52 against, and the bill moved over to the even more polarized Senate.

All eyes turned to the front of the chamber, where on the dais sat the Speaker of the Senate, Calvin Graves. As Speaker, he would cast the tie-breaking vote on a bill that both sides agreed would define the state of North Carolina for decades to come. Senator Calvin Graves rose from his seat and faced the hushed chamber.

Senator Calvin Graves was a Democrat, and that party was the center of opposition to the legislation. Just as important, the senator represented Caswell County, which sat on the state line just south of Danville, Virginia. If the bill were defeated and the North Carolina Railroad not built, western interests would implement their plan to construct a railroad line connecting Charlotte and Danville. That railroad would pass directly through Caswell County, bringing economic boom times to Yanceyville and to the entire county. The Senator knew full well that a vote against the western line would be intensely unpopular in his home county.

Yet Senator Graves believed that the east-west North Carolina Railroad would bring prosperity and economic unity to the state in a way the western railroad could not.

Without hesitation, Senator Graves cast his tie-breaking vote: “Yea.” The chamber erupted in wild applause. The North Carolina Railroad was chartered. Graves had weighed loyalty to his party, loyalty to his district, and quite possibly his own political future, against what he saw as best for all North Carolina.

On the next day, the Raleigh Register enthusiastically trumpeted the event and the future it promised. North Carolina had just made a statement that it would no longer be “The Rip Van Winkle State,” mired in economic stagnation.

A great system of internal improvement has been adopted, which will redeem and disinthrall the State and the people. A movement has been made which will shake off the incubus of lethargy and sloth for which we as a people have become proverbial; and which…has palsied every effort at improvement.

At his next election, the voters of Caswell County cast Calvin Graves out as their representative. He never ran for political office again, nor did he ever express regret at having cast his momentous vote.