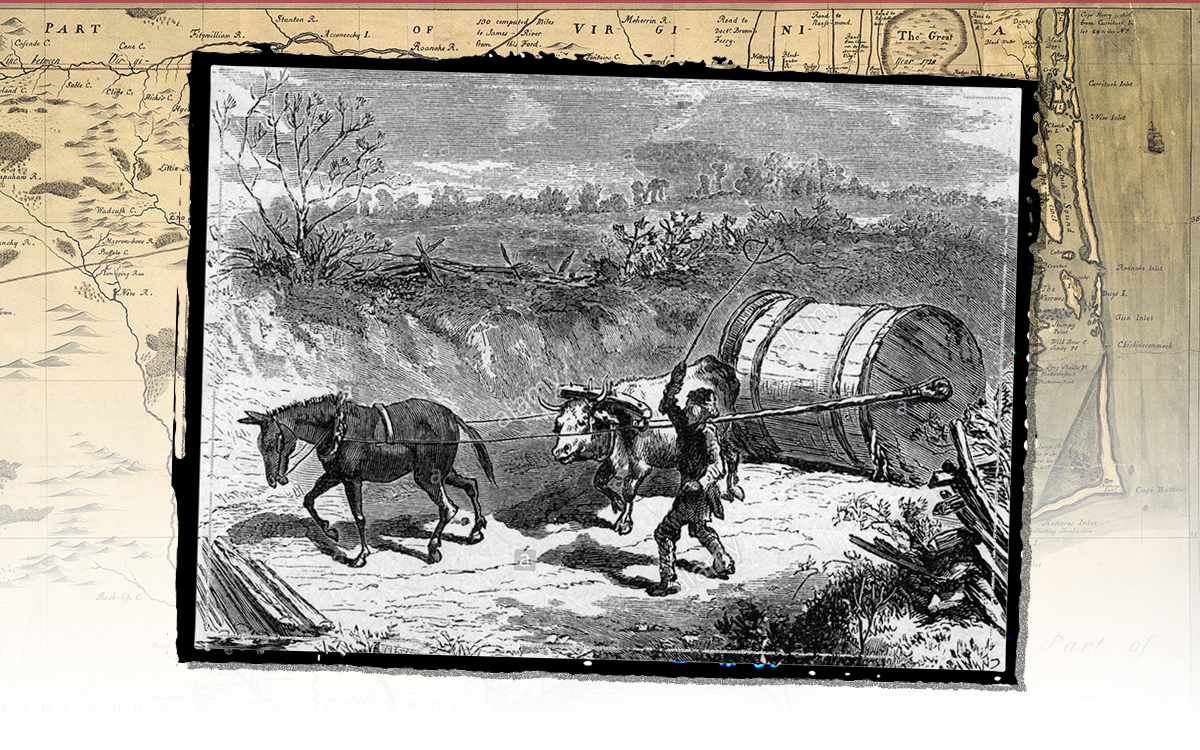 When it came time to transport colonial North Carolina’s tobacco crop to market, wagons groaned under the weight of the half-ton hogsheads, the wagon wheels sinking into the sandy soil of the coastal plain. Farmers overcame the problem by turning the hogsheads into rolling containers. By doing so, they created “rolling roads,” many of which became the roads we drive today.

In the late 1600s, driven by the depletion of soil after a half-century of cultivation, tobacco farming in Tidewater Virginia migrated south into the northern coastal plain of North Carolina. There, as it had in Virginia, tobacco became king. Not only did the crop drive the economy of the area, but it served as the currency that made trade possible. In all of colonial America, physical money – English Pound Sterling or Spanish gold coins – was extremely scarce. By default, tobacco leaves – and, later, receipts from tobacco warehouses – came to serve as commodity money. In North Carolina, Tobacco leaves were used as payment for virtually any economic transaction: to pay taxes to the Crown, to purchase wives, to pay the military and preachers, and to pay any bill or debt.

Given the power tobacco held over the economy and society, it was vital that the crop get to market. For colonial farmers along the sounds and navigable rivers, getting the crop to waiting ships was relatively easy. But farmers located away from the water had to transport their weighty crop overland to those same ships. Northeastern North Carolina was a land of few roads, all of them crude, and a wagon groaning under the average 1,000 pound weight of a hogshead full of tobacco was likely to simply sink into the sandy soil.

So North Carolina tobacco farmers adopted the tried and true method long used in Virginia: they rolled their tobacco to market.

The first step in transporting the crop was to pack the cured leaves tightly into a hogshead – essentially, an oaken barrel on steroids. In the image below, a large vertical press is being used to compress the leaves in a hogshead.

[Not surprisingly, tobacco leaves were not the only materials colonial farmers pressed into hogsheads. Early on in the tobacco trade, planters noticed that the agents who purchased their crop often loaded the hogsheads on a ship for export without bothering to verify the quality of the product being bought. After all, the hogshead would be opened only months later in far away England.

In a practice called “nesting,” some planters took advantage of the negligence by including tobacco stalks and even tree leaves to take up space. As a hedge, sometimes they would make sure that both ends of the hogshead were packed with high quality tobacco, just in case a nosy agent took a peek inside. The practice of nesting became so prevalent that smokers in England began complaining loudly about the quality of the American tobacco they were being sold. In response, the Crown appointed inspectors to examine colonial tobacco as it was being packed into hogsheads. If they found the product to be “mean” (inferior), they could burn the crop and bar the planter from growing tobacco.]

Quality control aside, because tobacco served as a form of money for economic transactions, there was a need to standardize the size of lots arriving at market. The 1752 Acts of Assembly for the colony of Virginia had this caution about possible penalties for those building non-standard hogsheads. (And notice that when a fine is levied, it will be paid in the currency of the day – tobacco.)

Coopers shall be placed under oath not to make tobacco hogsheads larger than permitted by law, and to mark the true weight of every hogshead made, under penalty of 500 lbs. of tobacco for every infraction.

This is the way we roll.

When a hogshead had been packed with tobacco, it was turned into a rolling machine. Using an axe, wood was formed into two felloes (a felloe being the rim part of a wheel), and these were fastened with wooden pegs around the hogshead where the sides bulge out. These two felloes effectively turned the container into a giant pair of wheels.

Then a hole was augured into the center of each head (i.e. end piece) and a long pole driven through the hogshead from head to head, leaving 3 or 4 feet sticking out on each end. This was the axle around which the hogshead/wheel rotated. If animal power would pull the hogshead, poles could be attached to the central axle and extended forward on each side as traces in order to hitch an ox or a horse. If manpower was used, 3 or 4 men on each side would use stout poles braced against the axle to either propel the hogshead forward or, when going downhill, to check its motion.

Many farmers rolled their own crop to market, but there were also men who would provide that service on contract. In the 1850s, Frederick Law Olmsted journeyed through North Carolina as a reporter for the New York Daily Times (now the New York Times). He traveled in an era of railroad transportation, but people in North Carolina tobacco country told him stories about the tobacco rollers from an earlier time. One lesson Olmsted took away from those stories was simple: in the old days, if you messed with one tobacco roller, you had better be prepared to mess with all tobacco rollers. Olmsted reported:

Small farmers themselves often brought in their tobacco in this way; but there were also a set of men who made it their principal occupation, and whose calling was that of “tobacco-rollers.” They contracted with the large planters to take their whole crop to the market-town at a certain price, furnishing horses, felloes, etc., themselves. It was their custom to so arrange their starting, that many would come together on the road, and so proceed, making a considerable camp, wherever they stopped for the night; and many such companies, by a previous agreement, would arrive in the towns together. A hard set they must have been—for the citizens now tell how, when they were young, all quiet housekeepers were kept in a state of excited alarm during the seasons when the tobacco-rollers were in town; and they well remember with what respect and consideration they were treated by all discreet people; for the quarrel of one, was made that of the whole body

Many of the earliest roads in eastern North Carolina were “rolling roads” – created and shaped by heavy hogsheads of tobacco on their way to market. Not only did these juggernauts flatten the path they traversed, they also dictated the route taken. Because even modest hills were challenging for a rolling hogshead – difficult to ascend, whether powered by man or beast, and dangerous on the down side – the road to market tended to find the flattest route possible. It is said that many current eastern roads, having evolved from tobacco rolling roads, still retain a surprisingly serpentine layout. If any reader from the eastern tobacco counties knows of such roads, please share your knowledge by commenting below. Thanks for anything you can contribute.

The featured illustration at the top of the page is courtesy NC Archives & History.

The Frederick Law Olmsted quote is from his book A Journey in the Seaboard Slave States, 1856. Use the link to read the entire book online at Documenting the American South, an initiative of the University Library at The University of North Carolina at Chapel Hill.

My thanks to Billy Yeargin, tobacco historian, for generously sharing with me his knowledge about the earliest days of the tobacco industry. Billy is the author of North Carolina Tobacco, A History, published by History Press.