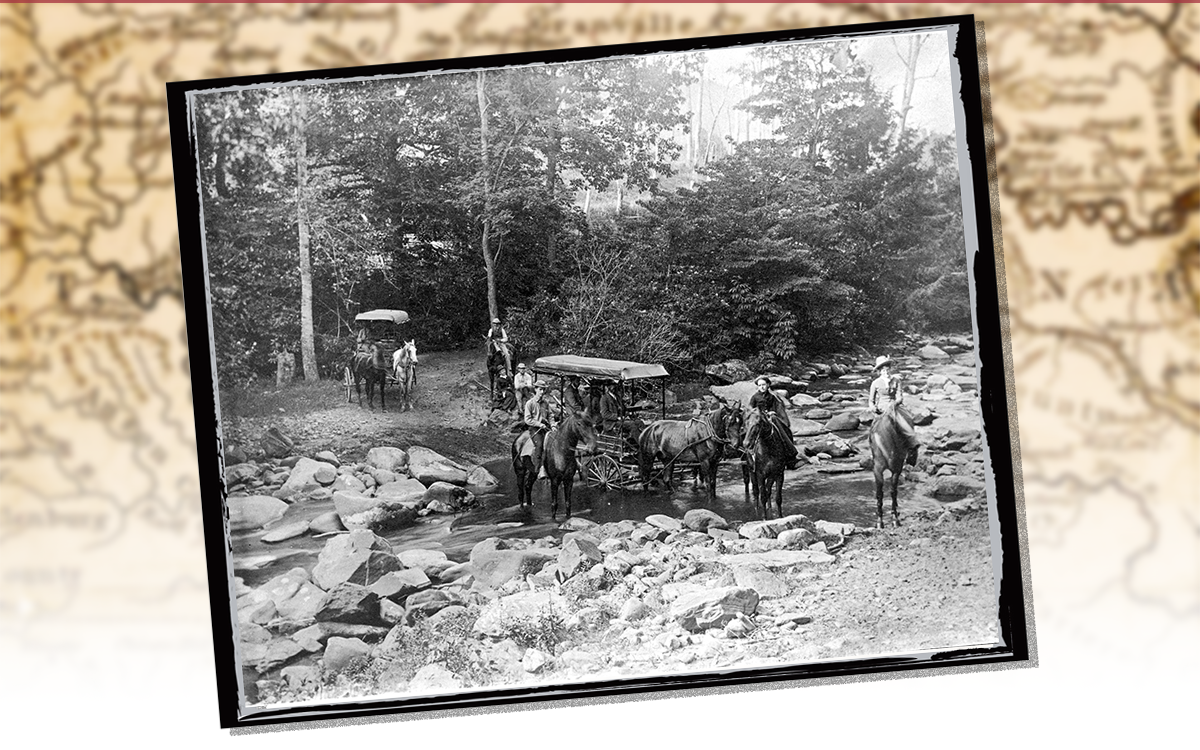 River Fords – where we crossed flowing water – dictated how we travelled and where we live.

As we zip over a river on a modern highway bridge, we are barely conscious of the water below. But for most of North Carolina history, bridges were rare, and flowing water was an obstacle to be overcome only at select crossing points. Long before the arrival of Europeans, established river fords played a vital role in shaping the land that would become North Carolina.

For Piedmont travelers, flowing water was not their friend. A river ford was.

Before bridges became common, rivers were obstacles to land travel. Crossing a river or stream was hard work, and it was inherently dangerous. In fact, the very act has come down to us as a metaphor for challenging times, as in song titles such as “One More River” and “Wide River to Cross.”

Confronted by flowing water, the traveler had to find a way to cross over, or progress came to a halt. And on our eastern and Piedmont landscape, having to cross a stream or river was not an occasional challenge. On a journey from the James River in Virginia south to the Savannah River in Georgia, a traveler would cross 38 large barrier streams. And a traveler walking 100 miles from the coast toward the west might easily have to ford 100 watersheds large enough to be named.

In the Piedmont, even small streams can be challenging.

Piedmont streams have several characteristics that make them particularly challenging to the cross-country traveler. They tend to have high, steep banks that make entering and exiting the water difficult. And they are prone to wild swings in water level. After heavy rain, it is not uncommon for a Piedmont stream to become a freshet with fast moving water at a level many feet above normal.

It was difficult to construct a wooden bridge that such a freshet would not sweep away.  And even in times of normal water flow, wooden bridges could be problematic. The relatively short spans tolerated by wood required more pilings in the middle of a stream, which caused debris to dam  up dangerously against the bridge, increasing stress to the point of failure.

Steel as a material for building bridges was not readily available in the United States until after the Civil War, and because of economic chaos following the war years, it did not become common in the south until decades later. The bridges we take for granted today were not common in North Carolina until nearly 1900.

With the act of crossing flowing water being hazardous at the best of times and death-defying at flood stage, it is no wonder that a relatively safe river ford was a prized location.

What makes a good river ford?

But those general characteristics also varied, depending on who or what was doing the crossing.

Human bearers carry loads measured in the tens of pounds. They are nimble and can scramble down slopes, creating tight switchbacks if needed. The best footing for foot traffic is gravel, as is often found where a feeder stream dumps its sediment on joining a larger watershed. So river crossings were often located where a smaller stream entered a larger one. And in addition to making a stream bed easier to negotiate, a tributary stream could actually provide a smooth entrance or exit ramp.  In fact, an ideal situation was often found when tributaries joined from opposite sides of a stream. There one might find both easy access and exit, as well as a beneficial gravel bed across the whole stream.

Horses are heavier than humans, and they carry loads of hundreds of pounds. They are not as adept on slopes as humans, so they seek a gentler slope when approaching a ford. Gravel and mud under the water are not good for horses, but horses handle slippery rock better than humans, so a flat, rocky bottom was best for them.

Wagons, with their loads in the realm of 1,000 pounds, brought an entirely new set of demands. In approaching a crossing point, wagons needed even shallower slopes than horses. At the stream, they required very gentle entrance and exit ramps. And under the surface of the water, they demanded a footing that would not let them bog down, but which was not so rocky and uneven as to break their wooden wheels.

If nature did not meet the wagon’s demands, the hand of man might be able – with back breaking work – to make crossing possible. One traveler noted in his diary:

The approach to the river was pretty good, but the exit was all the harder. We had to work till night, before we could make the opposite bank passable so that we could drive up. We passed the night there.

One wonders how many times this group “had to work until night” just to make it so their oxen could pull the wagon out of a stream. Travel was definitely not for the lazy,  weak, or impatient.

Stream fords were so important that they dictated the location of roads. We think of roads today as connecting towns, but in early North Carolina roads connected river crossing points. Every ford was connected to every other ford by a web of roads.

But even the best ford at any given time could become obsolete in the face of new demands. A ford that served well for centuries of crossings by humans on foot might not be so well suited for the pack animals that began to appear in the late 1600s. And a new crossing point found by riders may not have served for wagons when they arrived on the scene around 1730.

The evolution of travel from foot traffic to horses to wagons could cause an existing ford to become obsolete when it could not service a newer mode of travel. And if a newer, more accommodating ford began to be used, a new road would appear to service it. For example, if wagon drivers discovered a more gentle ford upstream, traffic would gravitate there, leaving an older ford largely irrelevant. In such a case, the wagons would, by their very discovery, create a new road connecting the new ford.

Even if a ford remained active, evolving transportation could cause the approaching roads to change course. Horses typically would use the trails long used by humans on foot, but only until they encountered a steep slope they could not deal with. At that point, the horse and rider would diverge from the established tail, cutting their own path down a gentler slope, creating a new road. Later, wagons would follow the horse trail until they could not handle the grade, at which point they would cut their own new road across more hospitable terrain.

Many of our oldest towns sprang up precisely at river and stream crossing points. Even in the best of times, a ford was a “choke point” for travelers at which the rate of travel slowed. With high water, travel could be halted altogether for some length of time. The tribe or (later) family that controlled the ford might provide services to the halted traveler, such as food and lodging for man and beast. Such services were often the seed from which a full-fledged town grew around the ford. Away from the river, towns tended to pop up along existing roads at intervals of a day’s travel.

Hillsborough, Salisbury, Greensboro, Salem, and Charlotte all started as clusters of buildings near critical crossing points. All shared the good fortune to be associated with fords that retained their viability. The flip side of that coin is represented by many other towns-in-the-making which watched helplessly as the crossing point they controlled became obsolete. The road to that ford would become less and less used, and the town’s fortunes would decline, lost to a newer ford up or down river. It’s a phenomenon we have all seen with a highway bypassing a small town, but the dynamic of changing fortunes was at one time tied to river crossing points.

Many signs point to the importance of river fords.

The location of river fords was a critical factor in how our state developed. Crossing points dictated where our roads ran, and they were the seed from which sprouted many of our most important cities.  Even today – long after the crossings themselves have ceased to be relevant – modern signs testify to the historical importance of river crossings. The next time you are driving across the North Carolina landscape, notice how many highway signs identify a road as having once led to a river ford or a ferry.

Featured photo of wagons crossing the stream and photo of horses fording the river are courtesy of the North Carolina Collection, Wilson Library, The University of North Carolina at Chapel Hill [P0086_84-82 PhC42_Bx25_Scenic Western NC_F192].

For information on river fords – including how to identify their historical location – I recommend the work of Tom Magnuson and his Trading Path Association.