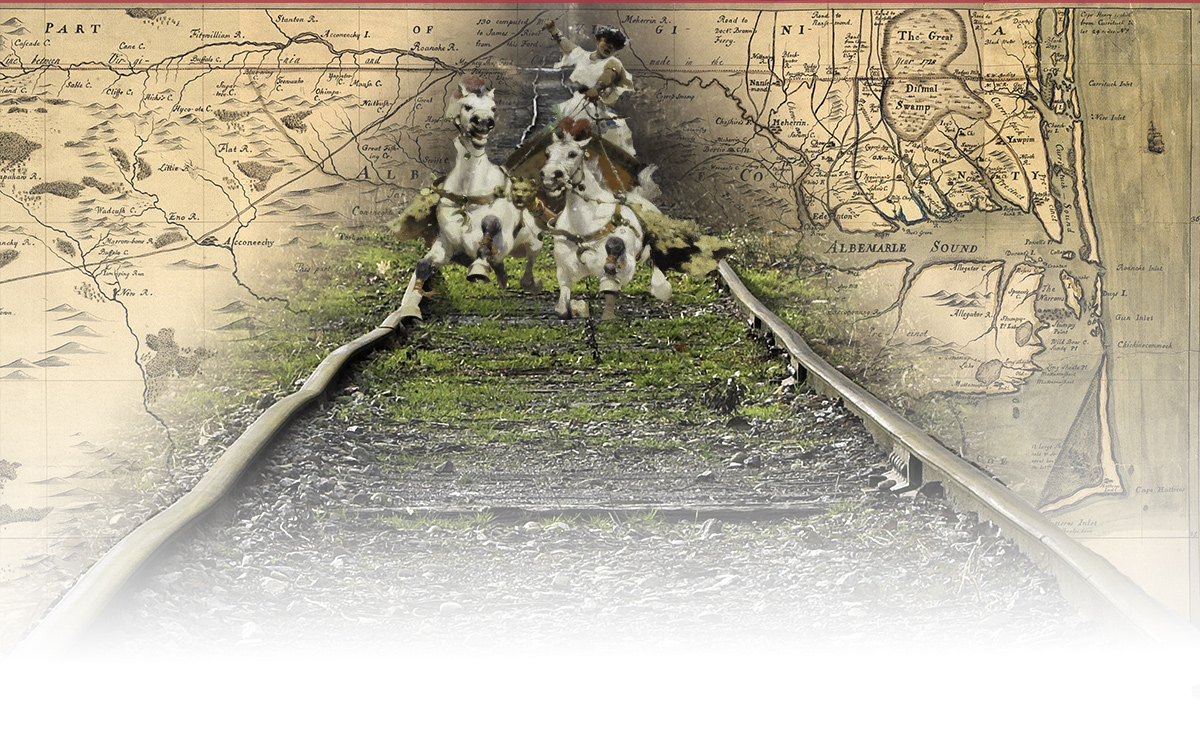 Did the Design of Roman Chariots Dictate the Standard Railroad Track Gauge in the United States?

Railroad track gauge is the distance between the two rails. In the United States today, the standard is set at 4 feet, 8 1/2 inches. That measurement was also almost exactly the standard distance between the wheels of Roman chariots. The similarity has led some to conclude that the current standard was passed down from Roman times. The connection between Roman chariots and modern rail can, indeed, be traced over 2,000 years. But it is not as direct a link as some would have you believe.

Roman chariots and British stage coaches were in the same rut.

A critical element of the Roman Empire was the extensive construction of roads. These roads were umbilicals connecting far-flung provinces with the power center of the empire: Rome. Within those provinces, roads also connected remote districts with the provincial power center. Roman roads were essential to the military, administrative and commercial framework that unified the empire.

When the Roman Empire invaded Britain in AD 43, the occupiers continued their road building with highways radiating out from London to more remote towns around the province of Britannia.They would eventually build over 2,500 miles of roadway on the island.

The roads varied in construction. Some were simply elevated earth, some were topped with gravel, and some were paved with large stones. Regardless of type, they were all heavily traveled by armies, administrators and commercial operators, all of whom used wheeled vehicles to transport cargoes.

Traffic of heavily loaded vehicles quickly created wheel ruts in soil and gravel. Over the years, the metal-clad wheels even wore ruts into stone pavers. Since any vehicle moving along a rutted road will move most efficiently if it fits into those ruts (as opposed to having the wheels on one side in a rut and the wheels on the other side out of a rut), it seems logical that the highly regimented Romans would have, over time, arrived at a de facto standard for wheel spacing.

The role of the chariot in determining that spacing is unclear. By the time the empire invaded Britannia, the war chariot was no longer used in battle, having been rendered obsolete by cavalry. But chariots were still used for fast, light transportation. Heavy loads such as military equipment and supplies were transported by cursus clabularis, or baggage wagons. And these heavy vehicles were more likely than the lighter chariots to wear ruts into the roadways.

So why does the story specify that chariots created the ruts? It might simply be the case that when stories of ancient Rome are passed down the years, the term “war chariot” has more sizzle than “baggage wagon.” Take your pick.

But whether the standardized wheel/rut spacing came from chariots or baggage wagons, the spacing did become standard throughout Britannia. And long after the tide of empire had ebbed back toward Rome, it was only natural for locally made vehicles to mimic the wheel spacing that had created the ruts. An English stage coach of 1800, for example, worked best if it had the same wheel spacing as the Roman vehicles of nearly two centuries earlier. It was, in many cases, still using the same rutted roads.

In the early 1800s, England was on the cusp of a new age of transportation: the age of steam powered railroads. And one of the prime movers in pushing railroads forward was George Stephenson. Stephenson was a mining engineer who made significant improvements to the design of the steam engines that were crucial to pumping water out of mine tunnels. He also dabbled in mounting a steam engine on one of the track-mounted mine carts that were in common use.

In 1821, the proposed Stockton & Darlington Railroad was set to implement a horse-drawn railway between County Durham coal mines and London. Thinking there might be some advantage to trying steam power instead of horse power, the Stockton & Darlington hired George Stephenson as chief engineer for the railroad.

As Stephenson laid out the rail line to carry coal, he wondered if there might be some interest in carrying people as well. What if the steam engine could pull one or more passenger coaches along the track? People would not want to ride in a coal car, but stage coaches were carrying people on the roads, and maybe those coaches, given flanged wheels, could be mounted on the railroad tracks. So – the story goes – before laying his first track, Stephenson measured the wheel spacing that seemed to be standard on stage coaches and spaced his rails to accommodate that spread. (Some say he got his number by measuring the spacing between ruts on the remains of a stone-paved Roman road.) The railroad track gauge that George Stephenson implemented in 1823 on England’s first railroad – all 26 miles of it – was 1,422 millimeters, or 4 feet, 8 inches.

For technical reasons having to do with the wheel flanges that ran inside the iron rails, Stephenson – on a later railroad – adjusted his wheel gauge to 4 feet, 8 1/2 inches.  And because connectivity between independent rail lines was important, that specification became “standard gauge” (also known as Stephenson gauge) for English railroads.

America spaced the track to fit the train.

George Stephenson had set the standard railroad track gauge for English railroads. The dimension of 4 feet, 8 1/2 inches was logical because it derived from a long tradition of transportation infrastructure dating back to the Roman empire. You might even say the standard was carved in stone. But America had no such history to justify that dimension. So when railroad mania came to the United States, there was no compelling reason to adopt the same standard. Except that the new country had no manufacturing capacity to build steam engines, so the first locomotives in the country were purchased from England. When those engines arrived, their wheel spacing was standard gauge.

So some of America’s first railroads were built at standard gauge by default. But America quickly developed the manufacturing resources to build its own engines, and with that capability the “standard” part of standard gauge went off the track.

Everybody, it seemed, had an opinion as to what the gauge should be. New England and the Midwest tended to retain the 4 feet, 8 1/2 inch standard. Pennsylvania and Ohio used a variety of gauges ranging from standard to 4 feet, 10 inches. and in New York State, the Erie Railroad laid its rails 6 feet apart. Most of the south opted for a railroad track gauge of 5 feet, although the North Carolina Railroad Company built its tracks across the state at standard gauge. That – as we shall see – was a decision the railroad would regret. At least temporarily.

The result of this hodgepodge approach to railroad track gauge was the creation of a collection of independent rail lines with no direct connection. The cars from one line would not run on the tracks of another line. So where one line ended and another began, either passengers and cargo were required to change cars, or the wheel spacing on the cars had to be adjusted to accommodate the new track.

When, after a great deal of trouble, you are comfortably installed in your car, Stop! The train stops, and you go on board another.

You must step out in the middle of the night, half asleep, and grope about to find the new train which you have to take, and which is always a very long way from that which you have just left. Not a man to tell you the way or show you.

In 1860, there were at least 11 distinct railroad track gauges in use in the northern states alone. A train trip from Philadelphia to Charleston required 8 changes of car because of differences in track width. The inefficiency was staggering. Although sometimes inefficiency was exactly the point. When the Erie Railroad in New York picked the odd gauge of 6 feet for its track, it did so precisely because it wanted to discourage the movement of cargo from its line to another railroad.

In 1862, with the Civil War still very much undecided, President Abraham Lincoln was determined to encourage construction of a transcontinental railroad that would unite the country east to west. With that in mind, he called for national standardization of railroad track gauge. (Needless to say, railroads in the Confederate States of America would not be effected.) The call for a standard unleashed a heated debate wherein various vested interests lobbied strongly that their local gauge was the obvious choice as a national standard. Chicago and New York wanted all railroads to adopt English standard gauge; Missouri called for 5 feet, 5 inches; and California held out for 5 feet even.

In 1863, following eight months of debate, the national railroad track gauge was set at a standard 4 feet, 8 1/2 inches. Standard gauge. Stephenson gauge. Following the war, in May of 1886, the former Confederate States conformed to that national standard.

The North Carolina Railroad and its regretable gauge

In the 1850s, the North Carolina Railroad had been constructed at standard gauge, a decision that brought several wrinkles to the railroad’s operation. Even at that time, much of the nation seemed to be headed toward that standard, so it seemed like a sensible long-range decision. But it caused immediate problems with interstate connectivity. Both the Richmond & Danville Railroad and the South Carolina Railroad operated at a gauge of 5 feet, so there could be no direct connection across state lines. Cargo and passengers on the important north/south route had to change cars in Greensborough and in Charlotte. In Charlotte, the NCRR and South Carolina Railroad built a joint terminal to ease the transfer of cargo and passengers between trains.

Roman chariots (and other wheeled conveyances) had a wheel separation of 4 feet, 8 inches. Modern railroads in the United States have a railroad track gauge of 4 feet, 8 1/2 inches. And the similarity is not coincidence.

But to say that chariots dictated our current standard implies a direct connection that does not exist. The United States did not have a standard railroad track gauge until near the end of the 19th century. In 1860, the chariot/railroad connection applied only to some American rail lines. With the North Carolina Railroad, you might say there was a connection, then there wasn’t, and then there was. Hardly direct.

And when the United States adopted a national standard, the choice of 4 feet, 8 1/2 inches had much to do with the outcome of the Civil War. As the winner, the north chose the standard gauge and even rebuilt many miles of devastated southern rail to that standard. That is, it rebuilt them to match its own railroads. A different outcome for the Civil War might well have resulted in different gauges for different regions.