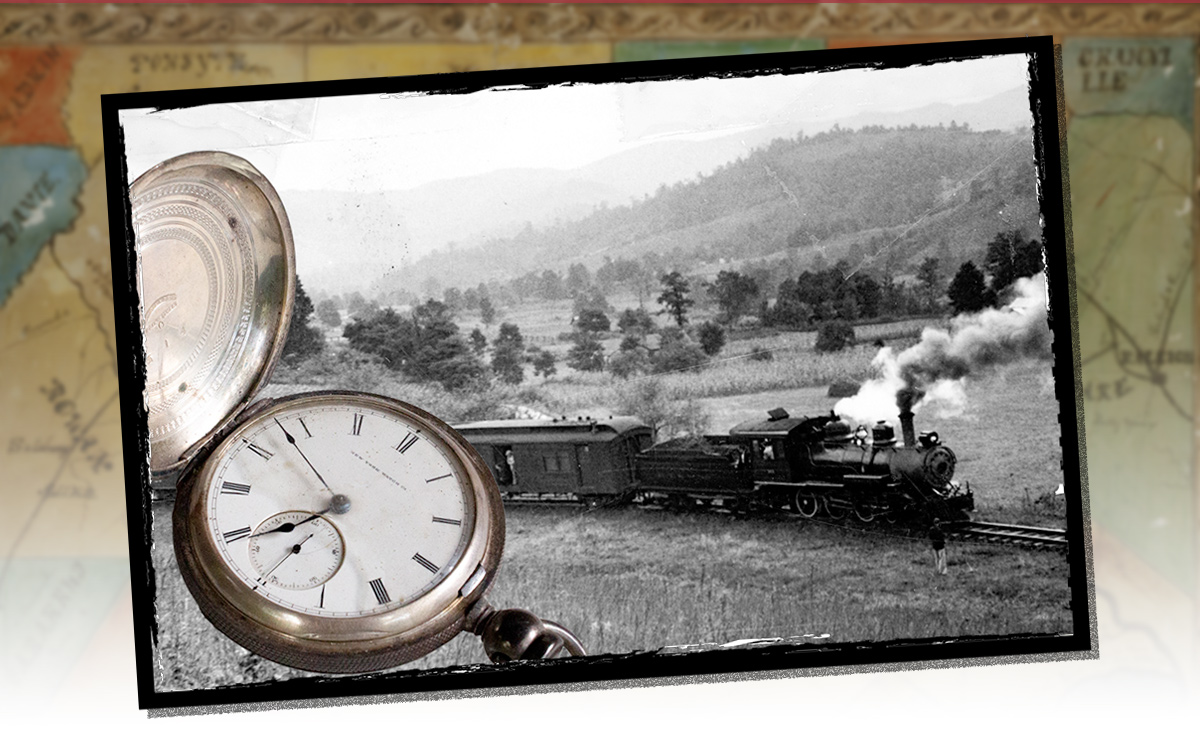 It Will be Noon When Railroad Time Says It Is Noon

America in the 1800s was still a country built around the farm, where the time of day was reckoned in broad terms: sunrise and sunset; daylight and nighttime; breakfast, dinner and supper. In a small town, where stores had business hours, churches scheduled services, and a court might hold session, a stricter calculation of time was more important. But each town kept its own time with little concern for the next town down the dirt road. Then the railroads came, imposing Standard Railroad Time.

For each town, its very own noon

In 1800s America, each town maintained a principal clock – often in a courthouse, church steeple, or the window of the town jewelry store – and it set that timepiece to register twelve o’clock when the sun was at its highest point. This “local time” served the needs of the town and its surrounds. Watch-carrying travelers would find their timepieces to be slightly off as they entered a new area of local time. (Across the width of North Carolina, there would be less than a 30 minute difference.) Such minor deviation was rarely a problem in an age when the stagecoach, the most efficient means of travel, was said to be “on-time” if it reached its destination the same day it was scheduled to arrive.

As railroads began to dominate land travel over distance, railroad managers were early to recognize that even a minor discrepancy in time could indeed be a problem: The multitude of local times were a source of confusion and chaos, sometimes with deadly results. And that confusion was hurting their business.

Most American railroads ran on single track, so that if two trains approached each other heading in opposing directions, one would have to pull off onto a siding to allow the other to pass. In order to synchronize their arrival at a designated siding, both trains had to agree on when that would happen. And they had to agree on what the current time was. In South Carolina on the Charleston & Hamburg Railroad, conductors were required to synchronize their watches with the official clock in the Charleston depot. Instructions to the conductors included the warning:

No excuse will be received for any accident caused by his watch being wrong.

And as train traffic became heavier and heavier, margins of error for this high-speed ballet of speeding trains became smaller and smaller.

A faulty watch could kill

A relatively small number of railroad accidents of the time were caused by errors involving time, but those few still captured the public’s attention. Investigators found that some of these collisions were caused, not by issues of differing local times, but by faulty watches carried by train staff.

On August 12, 1853 at Old Bridge, New Jersey, 4 people died in a collision. The cause was determined to be that the Engineer’s watch was 2.5 minutes slow.

At Mingo Junction, Ohio, in August of 1878, 18 died because the Conductor’s watch was 20 minutes slow. The Conductor was indicted for manslaughter.

And in November 1893, in Badner, Ohio, 4 were killed in a railroad collision because the Engineer’s watch was 17 minutes slow.

Investigators eventually found that these collisions – and the associated fatalities – were caused by faulty watches. But they prompted the railroads to consider the need to somehow standardize and regulate time as it applied to train traffic.

Scheduling chaos in a world of myriad local times

Even when all railroad watches were accurate according to some local time, scheduling according to multiple local times was confusing and chaotic. Individual railroads maintained their own official time, usually based on local time either at the city where they were headquartered or at their most important terminus. Depots serving multiple railroads had a clock showing a different current time for each line. Schedules were printed listing as many as six arrival and departure times for a single train, in deference to the local times of the towns the train passed through.

In an effort to bring scheduling sanity to their industry, a group of railroad managers and editors of railroad publications proposed that the United States be divided into time zones. Theirs was not a novel idea. A system of time zones had long been supported by astronomers – from an amateur who proposed time zones to Congress in 1809 to the influential observatories at Harvard and Yale. Geophysicists also called for time zones, citing the difficulties in making simultaneous observations from separate places when each location had its own local time.

The railroads agreed that it was in all their best interests to move from an arrangement haphazardly based on fifty different local times to an orderly system based on four time zones. Those zones would be demarcated by the 75th, 90th, 105th, and 120th meridians. Being railroad men. they also had a plan for how to implement the transition.

By common agreement among the railroads, on Sunday, November 18, 1883, at precisely noon in New York City, all railroads in the United States and in Canada adjusted their watches to the new Railroad Standard Time. At that moment, their watches would display 12:00 PM, 11:00 AM, 10:00 AM, or 9:00 AM, depending on their time zone. For conductors in the western part of any zone it meant skipping over a portion of time, while for those in the eastern part of a time zone, resetting their clock meant experiencing once again a time of day that had already passed. (It sounds exactly like the “Spring ahead, fall back” exercise we go through today twice a year going on and off Daylight Savings Time.)

The newspaper notice above announces the Carolina Central Railroad’s “change of time” to Railroad Standard Time on November 18, 1883. In that edition, published on the very day of the change, this was one of three such time-change announcements by railroads. There was no mention of the change at all in the news or editorial sections.

My assumption is that the eight minute increment mentioned is based on this: As the sun tracks east to west, 15 degrees of longitude corresponds to a one-hour difference in solar time. Raleigh is approximately 2 degrees of longitude west of New York City (where official time was decreed), and 2/15ths of an hour is roughly 8 minutes. So riders on the Carolina Central R. R. needed to set their timepieces ahead (“faster”) by that duration.

The railroads led the way. The people, and then Congress, followed.

As of noon, November 18, 1883, the railroads were in sync. For most people, it seems not to have mattered. On the farm, the hands of the clock still pointed to daybreak, breakfast, dinner, supper and dark. But dominant as the railroads were in the conducting of any business – including shipping farm products to distant markets – the public began to accept Standard Railroad Time as the de facto system for structuring the day.

Henry David Thoreau, in his 1854 Walden, or A Life In The Woods, noted how people came to rely on the well-ordered railways as the arbiters of time. And he went on to suggest that the faster pace of the railroad business fundamentally changed the rhythms of everyday life:

The startings and arrivals of the cars are now epochs in the village day. They go and come with such regularity and precision, and their whistle can be heard so far that the farmers set their clocks by them, and thus one well-conducted intitution regulates a whole country, Have not men improved somewhat in punctuality since the railroad was invented? Do they not talk and think faster in the depot than they did in the stage-office? I have been astonished by the miracles it has wrought.

That is not to say that everyone accepted the new reality gracefully. One newspaper editorial complained that people were being forced to…

Remarking on the similar imposition of standard time in England, Charles Dickens bridled against…

…railway time observed in clocks, as if the sun itself had given in.

Despite the hold-outs and nay-sayers, the pendulum of public sentiment swung increasingly toward acceptance of Standard Railroad Time. But it would be 35 years before Congress acted to make standardized time the law of the land. On March 19, 1918, Congress passed the Standard Time Act of 1918. The statute adopted the time zones established by the railroads, and it placed responsibility for any future changes to the system in the Interstate Commerce Commission, that being the only federal regulatory agency at the time dealing with transportation. In 1966, that authority was transferred to the Department of Transportation.

To sticklers for accuracy, I know that the pocket watch in the featured picture is not an authentic railroad watch. (It was my electrician grandfather’s watch, and it was handy to photograph.) Tip-offs to its inauthenticity as a railroad timepiece are that certified railroad watches could not have a lid, the winding stem had to be at 12 o’clock, and the numerals had to be Arabic in style and bold. Here is a link to an interesting read on railroad watches.