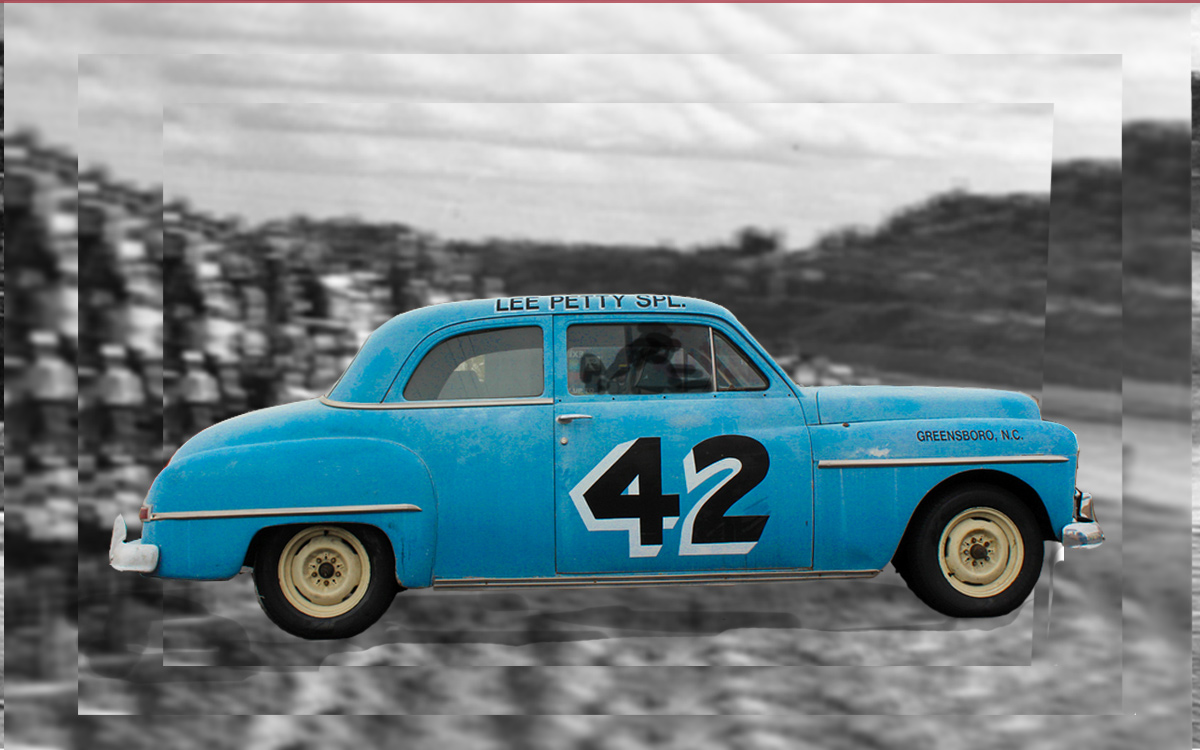 In the very early 1950s, Lee Petty showed up at a stock car event to race his #42 1950 Plymouth, which had been painted bright blue. In a short time, the distinctive color would become known to racing fans as “Petty Blue” and it would become signature branding for generations of racing Pettys, including Lee’s son Richard and his grandson Kyle. But far from being a meticulously designed, carefully chosen color, Petty Blue most likely resulted from a random mix of left-over paint.

Passing on a story told

Moving North Carolina is a blog about the history of transportation in our state, and a reader might well question how I can justify a posting about auto racing. Essentially, a race car carries one person – the driver – from point A around in circles and back to point A. That is hardly what we typically have in mind when we talk of transportation. On the other hand, it could be argued that motor sports have a lot to do with transportation for the simple reason that since its early days, auto racing has provided a proving ground for many improvements to automobile technology, improvements that would later be incorporated into the car a family bought at the dealership.

But setting aside all attempts to justify this blog post as transportation-related, here is the candid reason why this article is here: I want to pass on a car story that I was told by a man named Elmore Coleman about how the color that became famous as “Petty Blue” came into being. As you will see, I have absolutely no proof that the story is true, but I believe it because I totally trust the word of the man who related it to me. (Full disclosure: I knew Elmore Coleman well because he was my father-in-law.)

There will be some who dispute the facts of story, and there will be some who simply dismiss it as unsubstantiated memories. And that is fine. But this is my chance to honor Elmore Coleman by passing on the story he told to me, not as a brag or boast, but simply as something he was able to do many years earlier to help a neighbor.

The Wikipedia entry for Petty Enterprises contains the following:

One of the most distinctive features of the No. 43 car is its color. Petty Blue, as it’s called, was created by the Petty family. According to Richard, the color was created by accident when they didn’t have enough white or dark blue paint to cover the entire car. The resulting mix of white and blue proved to be very popular and remains on the No. 43 car to this day. Previous to that 1958 occurrence, Petty cars were generally white or red.

Lee Petty (1914 – 2000), of Level Cross, North Carolina, south of Greensboro, was raised on a farm during the Great Depression. As a young adult, he made his living as a mechanic, and at age 35 he became involved in auto racing. For his first race, he borrowed a 1946 Buick Roadmaster, but it was not an auspicious beginning; he lost control of the car during the race and rolled it over several times. Lee would go on to be one of the most successful of the first generation of NASCAR drivers, winning 54 major races, three national championships, and the very first Daytona 500. But his success came only after years of showing up at the track on the weekend with whatever vehicle he could patch together for the race.

Elmore Coleman (1921 – 2001) grew up in the Sneads Ferry area of coastal North Carolina. When the war came, he enlisted in the army and saw combat in Europe, including going ashore in the D-Day landing. After the war, he and his wife settled down on Randleman Road between Greensboro and Level Cross, and Elmore went to work in Greensboro for Gate City Motorcars as a body and paint man. He would eventually become the manager of the Gate City Chrysler/Plymouth body shop.

In Lee Petty’s early racing years, before he started seeing the checkered flag, he didn’t always have money to keep his race cars running. In that era of more-or-less stock cars, race speeds were lower, and there was considerably more physical contact between cars. In fact, bumping – known as “framming” – a competitor’s car to move it out of the way, and maybe even send it spinning into the infield, was a common tactic.

As Elmore remembered those days, Lee would sometimes tow a dinged up race car to the Gate City Motorcars body shop during the week, call Elmore aside, and say something like, “Elmore, a front fender got banged up to where the tire is scraping on it. I don’t have any money to get it fixed right, but could you maybe just pull the fender off the tire so I can run the car this Saturday?” Lee was a neighbor just down Randleman Road, so Elmore – who was also a race fan – would help if he could. He might tell Lee, “Just leave the car out back, and I’ll see what I can do.” After the dealership closed in the evening, Elmore would work on the car and do what body work needed to be done. And come Saturday, Lee would be back in the hunt.

One day in the early 1950s, according to Elmore, Lee showed up with a new request. The car was running fine, but Lee thought it looked just awful, and he couldn’t afford to have it painted. He wondered if Elmore might help him out by putting a coat of paint on the car to give it a little more flash. Elmore asked what color Lee wanted, and the reply was, “I don’t care what color it is. Just anything you can do will make the car look better.” So Elmore told him, “Just leave it out back, and I’ll see what I can do.” That evening, Elmore pulled Lee’s Plymouth into the paint area of the shop. From shelves around the shop, he gathered a bunch of cans of remnant paint – partial cans left over from finished jobs. He mixed various cans together, stirred well, and with the concoction, he painted Lee Petty’s car.

Trouble down the road

When Lee came to pick up the newly-painted vehicle, he was overjoyed. To him, the bright blue car was beautiful, and now he had a car he could be proud to strut around the track. If Lee was happy, then that made Elmore happy, and Elmore thought that was the last of it. But many months later, Lee showed up at the paint shop again, saying he needed another paint job.  Willing to help again, Elmore asked if Lee had a color in mind, and Lee said, “That blue you painted it before is my color. That’s what my fans will be looking for, so it has to be the same color when you paint it this time.” Now Elmore had a problem. He had no idea what the formula was for that bright blue color because he had no idea what those miscellaneous paint remnants had been. Remembering his quandry years later, Elmore would just shake his head. But Elmore was a professional auto paint man, and he matched the color as best he could, because it was now a recognizable “Petty Blue.”

Over the years, three generations of Pettys have driven race cars painted wholly or partially bright blue. Collectively, Lee Petty, Richard Petty and Kyle Petty have driven those cars to an astonishing number of checkered flags, so much so that there is arguably no color more iconic of NASCAR than Petty Blue. The Petty family is, no doubt, proud of their record and of their signature color.

Elmore Coleman was just happy to have been able to help a neighbor.