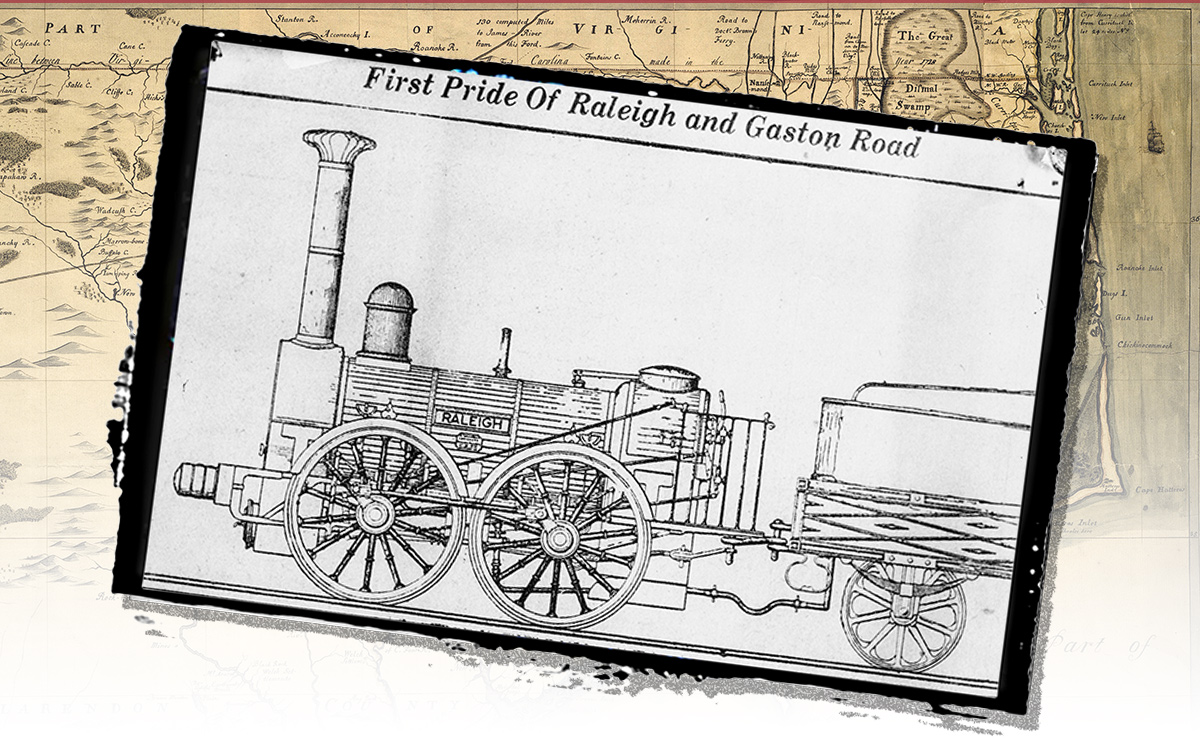 As the balance of political power in 1830s North Carolina shifted from the conservative Democratic Party to the progressive Whig party, it became apparent that after years of debate, North Carolina’s first railroads would be built. Left to be decided was where those rail lines would lie on the land and who would build them.

Many charters, but only two railroads.

During the decade of the 1830s, many entrepreneurs aspired to build railroads, and the state of North Carolina chartered 25 companies to do so. But a charter was not an operational railroad; it was simply a license to solicit private funding toward actual construction. As had happened earlier with both turnpikes and canals, many rushed to acquire a charter for a progressive “internal improvement” project, only to be confronted by a reality check when they attempted to raise capital for the project. Of the 25 railroads chartered by the North Carolina legislature in the 1830s, few were built. Two of them – the Wilmington & Weldon (originally chartered as the Wilmington & Raleigh) and the Raleigh & Gaston – began operations in 1840 and would share the honors as North Carolina’s first railroads.

Business interests in Wilmington, the state’s principal seaport, very much wanted a rail line to connect their port with the interior. In 1834, they received a charter to operate as the Wilmington & Raleigh Railroad, and they raised $400,000 in stock subscriptions. When Raleigh showed scant interest in the project, the plan was changed. The railroad would pass 40 miles east of Raleigh. (Take that, capital city!) The name was later changed to the Wilmington & Weldon Railroad to reflect the line’s new configuration.

At its southern end, the line ran from the seaport at Wilmington up into Duplin County, where it dutifully serviced Faison’s Depot (Elias Faison being a wealthy shareholder) before heading farther north, passing through Goldsborough’s Junction (now Goldsboro) and Rocky Mount.

The northern terminus at Weldon may seem today to have been an odd choice. Such a sleepy little town. But Weldon of the 1830s occupied an economically commanding location serving the cardinal points of the compass. From the west, bateaux descending the Roanoke River and the Roanoke Canal brought the agricultural bounty of the Piedmont. From the east, steamboats working the Roanoke River connected to the Albemarle Sound and the Dismal Swamp Canal. The river boats could go no farther upstream than Weldon, stymied the rock-strewn rapids of the fall line. And to the north, across the river, the town offered connection to rail lines in Virginia and to bustling northern markets.

The railroad was organized in 1836 at the Wilmington home of Edward B. Dudley, who had invested $25,000 in the venture. The host was elected President of the new railroad at a salary of $2,000 a year. Construction began in October. That same year, the people of North Carolina elected Dudley as governor. And in 1837, the state purchased 2/5 of the stock in the Wilmington & Weldon for $600,000.

The  line was inaugurated on March 9, 1840, the occasion celebrated with the driving of a golden spike. Additional festivities included a 161 gun salute and a barbecue dinner for 550 attendees at the Wilmington Depot.

At 161.5 miles in length, the Wilmington & Weldon was the longest single-operator railroad in the world. It made the tiny village of Weldon a major railroad hub for the whole east coast. Travel time between Weldon and Wilmington was 11 hours; a ticket cost $5.00.

The fact that Raleigh had shown little interest in the proposed Wilmington & Raleigh Railroad did not mean the city did not want a railroad. They simply wanted their own railroad.

Railroad interests in Virginia had already laid track stretching south from Petersburg and crossing the Roanoke River into North Carolina. The line’s southern terminus was at Gaston, located at the top of the Roanoke Canal, about four miles up-river from Weldon. In 1835, the legislature chartered the Raleigh & Gaston Railroad. And the next year, Wake County residents and businesses worked in parallel with interests in Richmond and Petersburg to raise funding for the line. In 1839, the state of North Carolina purchased $500,000 in bonds for the Raleigh & Gaston Railroad.

The railroad was officially completed on March 21, 1840, and a week later, a first shipment – 20 bales of cotton from Petersburg – were unloaded at the Raleigh depot at the corner of Salisbury and Halifax streets.

The Raleigh Register of March 24, 1840 captured the excitement. (The snorting engine referred to was likely the “Raleigh,” pictured at the top of the page.)

About 6 o’clock… the first Steam Locomotive, that ever snorted amongst the hills of Crabtree, reached the limits of our City, and was enthusiastically welcomed with every demonstration of joy. The bells rang, the artillery roared and the people cheered. Huzza! Huzza! Huzza! The Raleigh and Gaston railroad is completed, and no mistake…”

“Magnificent enterprise! We have now ocular demonstration of that, which no man would have believed thirty years ago, to be within the compass of human power…”

“We hail the rumbling of the first locomotive, as the glad omen of future prosperity to our city and county, and feel that we shall not be disappointed.”

Both the Wilmington & Weldon and the Raleigh & Gaston had a reputation for poor construction and shoddy maintenance. It was said that they were among the worst railroads in the south.

Englishman John Shaw snooted that the Wilmington & Weldon Railroad was:

Too slovenly an example of railway construction to call forth the admiration of the foreigner.

The Petersburg Intelligencer caught the spirit of travel on the Raleigh & Gaston line:

There is scarcely a piece of iron on [the road] of six feet continuous length. But what of that? The cars jump from the iron to the wood rail, then skip a while on mother earth, and then jump fiercely [back on the track], and go on their way rejoicing in a speed of some eight miles an hour.

A mere five years after its debut, the Raleigh & Gaston Railroad had become so dilapidated that the state bought it in foreclosure.

And yet. Both railroads had an immediate economic impact, if only on the eastern part of the state. (It would be another decade before a dramatic vote in the senate cleared the track for rail service to the western counties.)

At the most basic level, the new railroads helped both farmers and consumers. Not only did they reduce shipping costs – a major factor at a time of abysmal roads – but they allowed products to reach markets where demand drove up the selling price. A few years later, reporter Frederick Law Olmsted cited the example of a farmer near the railroad who shipped his cotton to a distant city where it sold for $1.20 a bale. At the same time, a farmer located only 40 miles away, but unable to reach the railroad because of bad roads, sold his cotton locally for $0.60 a bale.

Another benefit was that the railroads created jobs, especially for the “right” people – apparently a sensitive point for some:

…to give employment to native Southerners, in preference to reckless adventurers, either from the North or elsewhere.

In 1850, a decade after the Wilmington & Weldon Railroad was built, the North State Whig in Washington NC commented on the difference the railroad (and improvements to navigation on the Cape Fear River) had made in Wilmington:

Look at Wilmington. But yesterday she was a dirty little village. Today she stands a proud enterprising city. What has made her what she is from what she was so late? Her internal improvements.

And Philo Tower, a northerer who traveled south, commented on Wilmington’s progress:

Its population and business elements have been greatly increased by the construction of the Wilmington and Raleigh railroad, which forms a part the great highway of travel north and south.

The North Carolina Transportation Museum in Spencer has on display a life-sized recreation of the steam engine Raleigh.