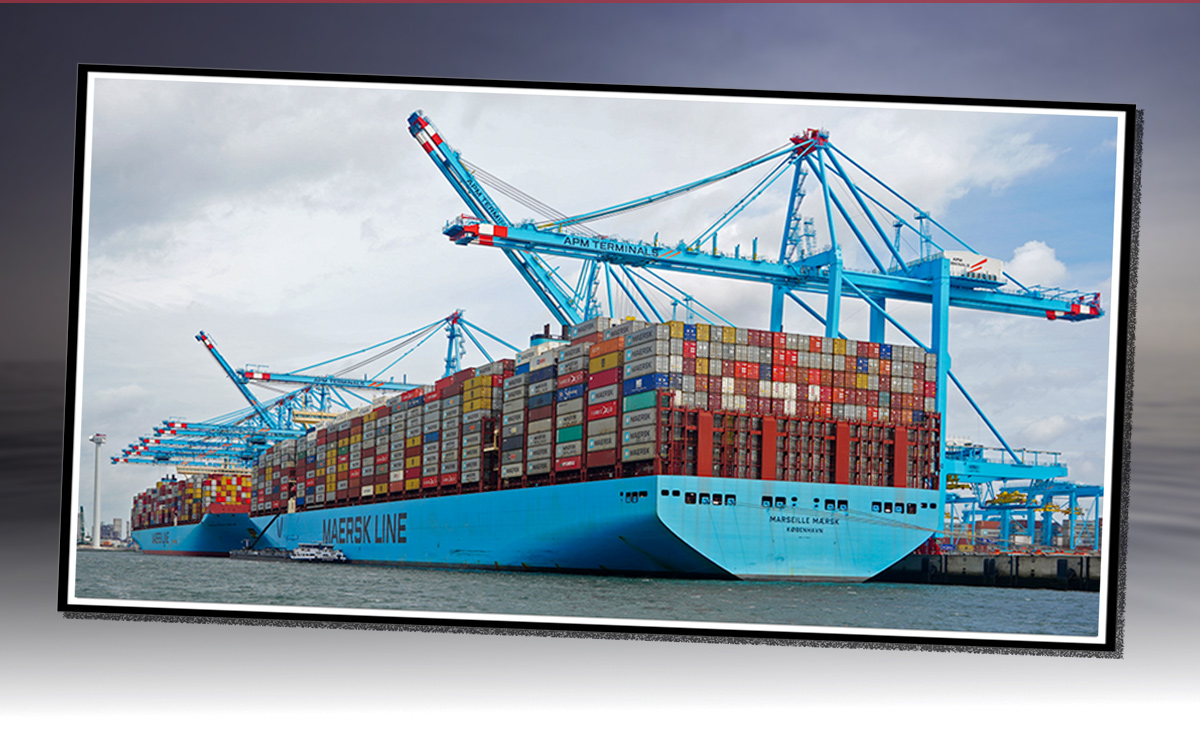 Malcolm McLean: He changed your world.

Vessels like the ones above – with their cargoes neatly stored in individual containers stacked on deck – are the backbone of the global economy. Ships like these handle 90% of the world’s ocean trade, and the efficiencies they bring to transportation have done more to lower the prices of imported goods than the often-cited low labor costs of Asia. They are a global phenomenon, but they have a North Carolina connection: If you trace the story of their development, it takes you back to 1930s Maxton, North Carolina, where a depression farm boy named Malcolm McLean had managed to save up $120 to buy a used truck.

Malcolm McLean – who later in life would spell his first namd “Malcom” – grew up in rural North Carolina near the tiny town of Maxton, a little east of Laurinburg and just above the South Carolina border. His father farmed and also worked as a mail carrier to help support the family. Malcolm was graduated from high school in 1931, but with the country still in the grips of The Great Depression, his dream of going on to college was not possible. He took a job at a local automobile service station, and by 1934, he had saved enough money to purchase a used truck, for which he paid $120.

Malcolm put the truck to use by selling his services hauling produce and materials within the local community. Around the state, he hauled dirt for WPA projects and tobacco for R. J. Reynolds. And then it was textiles from North Carolina to New York City. In an era when reliable transportation was not a given, he was able to prosper, purchasing additional trucks and hiring drivers. Liberated from driving deliveries himself, Malcolm concentrated on identifying new customers, and the business grew even more. There were rough patches along the way, but by the early 1950s, McLean Trucking Company owned 1,776 vehicles, operating them out of 37 transport terminals up and down the east coast. McLean Trucking Company – based first in Raleigh and then in Winston-Salem – became the largest trucking fleet in the South, and the fifth largest in the country.

An epiphany in Hoboken

In 1937, Mclean had an experience that planted a seed in his mind. An economic downturn had forced him to lay off drivers and climb back behind the wheel himself. One trip had him pick up cotton bales in Fayetteville and deliver them to the port in Hoboken, New Jersey.

Cargo ships at that time were loaded and unloaded – as they had been for centuries – by stevedores, also known as longshoremen. If you are familiar with the movie “On The Waterfront,” that was the scene. Every item to be shipped was carried by hand and either walked up the gang plank onto the ship or placed on a pallet to be lifted aboard in a cargo net. Once on board, the items in the cargo net were removed by hand and stored in the ship’s hold. Writing about the process, one author described a shipment bound from Brooklyn to Germany as being composed of 194,582 separate items that had arrived at the Brooklyn dock in 1,156 separate shipments. The loading of cargo ships by stevedores was, to say the least, time consuming and expensive. It was also plagued by damage to goods and by pilferage.

When Malcolm McLean arrived at the port in Hoboken, he had to wait in his truck for hours before it came time for the stevedores to unload his cargo of cotton. McLean described the experience:

I had to wait most of the day to deliver the bales, sitting there in my truck, watching stevedores load other cargo. It struck me that I was looking at a lot of wasted time and money. I watched them take each crate off the truck and slip it into a sling, which would then lift the crate into the hold of the ship.

It would be nearly 20 years before Malcolm McLean would use that experience to create a new business. But the seed had been planted in his mind, and over the following years, he thought through the issues: Why couldn’t you just drive trucks on board the ships and drive them off at the destination port? Well, that would be an inefficient use of machines and of storage space. Why not just lift the trailer with its cargo and let the cab drive away to pick up another load? Same problem of inefficiency. Why not make a box that sat on a truck trailer’s chassis, so that you could hoist just the box onto the ship? Ah ha! Some companies were already using boxes to ship certain cargoes, but there was no standardization, and the mismatched boxes were difficult to store efficiently. What if you standardized the size and construction of all such boxes so that they could be hoisted onto the ship and stacked one on top of the other? Yes! And the uniform construction design would mean the individual boxes could have a locking mechanism at each corner that secured them in place – and to each other – for even the roughest ocean crossing.

So the concept of containerized shipping came into focus. But the concept still had to prove its viability.

The marriage of trucking and shipping

Malcolm McLean was convinced that trucking and shipping could work together to improve the transportation of cargoes over distance. In the very early 1950s, he envisioned that cooperation in the form of his trucking company acquiring ships that would carry his trucks up and down the US Atlantic coast. But as he honed in on the idea for standardized containers, his vision morphed. A ship would have to be built specifically to carry the containers in a secure fashion. Accordingly, he purchased a tanker ship, the SS Ideal X – one of the largest vessels afloat – and had it converted into a vessel with a single purpose: to carry his new standardized boxes.

On April 2, 1956, the Ideal X sailed from Newark NJ carrying 58 containers – each 35 feet long and full of cargo – bound for Houston. On arrival, the containers were craned down onto the dock, there to be inspected to determine how the contents had fared on the journey. The eyes of the whole commercial transportation industry were on that inspection, and when it was discovered that all the shipped goods were dry, undamaged, and accounted for, the world of shipping and the global economy changed forever.

In 1958, The New York Times captured the new reality of shipping:

A trailer is loaded, for example, in Springfield, Mo. It travels by road to New York or San Francisco, sealed, virtually damage-proof and theft-proof. By ship it goes to France or to Japan, eliminating warehousing, stacking and sorting. Each ship takes on her cargo with a few hundred lifts, compared to 5,000 individual lifts by the old method.

As succesfull as the Ideal X’s maiden run had been, it would take years for Malcolm McLean’s vision to become a reality that dominated the shipping industry. Many obstacles had to be overcome.

Ports had to be refitted to accommodate larger ships, including constructing the cranes necessary for loading the containers. It was a massive undertaking, but given the economics of containerized shipping, it was an easy sell. Using stevedores to load a 1950s ship cost nearly $6 per ton of cargo. With McLean’s containers, the cost fell to 16 cents per ton. The time it took to load and unload a ship also fell dramatically, reinforcing the old shipping adage that a ship only makes money when it is at sea. And because containerized shipping was faster and less prone to have goods damaged or go missing, insurance rates went down. In a shrewd move, McLean made his container designs available to all shippers, insuring that ports had only one set of standardized boxes to deal with.

As with any disruptive technology, there were winners and losers. Shippers and port authorities won. And American consumers looking for more and lower-priced goods won. But others suffered. Containerization was devastating to the many thousands of stevedores who had traditionally loaded and unloaded cargo ships. The powerful unions that represented these workers saw their future writ large from the very first voyage of the Ideal X. As the revolutionary vessel pushed away from the dock at Newark that April day in 1956, Freddy Fields, a top official with the International Longshoremen’s Association was asked what he thought about the new container ship. He was terse: “I’d like to sink that son of a bitch.”

The trucking industry, which had ruled the roads for long-distance hauling, lost business to shipping. When, in addition to his trucking company, McLean became owner of Pan-Atlantic (later SeaLand), a shipping company, he ran afoul of Interstate Commerce Commission rules against such dual ownership. He sold the trucking company he had nurtured from one used truck, and he became a principal salesman for maritime transport. The trucking industry survived and prospered by adapting to the new transportation environment by focusing on services that complemented containerized shipping. It was the same sort of adaptation the stagecoach business had used when railroads took their long-haul business.

And down the road, containerization would have a profound effect on the state of North Carolina. Among the cheaper goods the new shipping made available to consumers were furniture and textile products from Asia. Over the ensuing years, many a shuttered mill or factory in the state could count containerized shipping as a contributory cause.

No matter how you decipher the balance sheet of globalization, there is no doubt that Malcolm McLean. a farm boy from Maxton, North Carolina, played crucial role in shaping the world we live in. When he died in 2001, the Baltimore Sun said “…he ranks with Robert Fulton as the greatest revolutionary in the history of maritime trade.” And Forbes Magazine identified him as “…one of the few men who changed the world.”

I was prompted to tell the story of Malcolm McLean by an event in North Carolina May 20, 2020. The MV Hyundi Hope, one of the new, gigantic breed of container cargo ships arrived at the port of Wilmington NC. These newer, larger ships were made feasible by the expansion of the Panama Canal, and the arrival in Wilmington was made possible by recent significant improvements to the port ant to the Cape Fear River. The Hyundai Hope is 157 feet wide and nearly 1,200 feet long. It can carry almost 14,000 containers. If stood on end, the ship would tower over the Bank of America building in Charlotte (NC’s tallest building) by nearly the length of a football field. Somewhere, Malcolm McLean in smiling.

You can read the story of the arrival of the Hyundai Hope in North Carolina as reported in Wilmington’s Port City Daily here.

Malcolm McLean was the visionary behind containerization, but the man who designed the standardized container system was Keith W. Tantlinger, a mechanical engineer. Tantlinger had worked for Douglas Aircraft Company during WW II, and after the war he became vice president of engineering at Brown Industries, a Spokane, Washington company that manufactured truck trailers. In the mid 1950s, Tantlinger took a call from one Malcolm McLean who was looking for someone to design a box for him. For more about Mr. Tantlinger, click here.