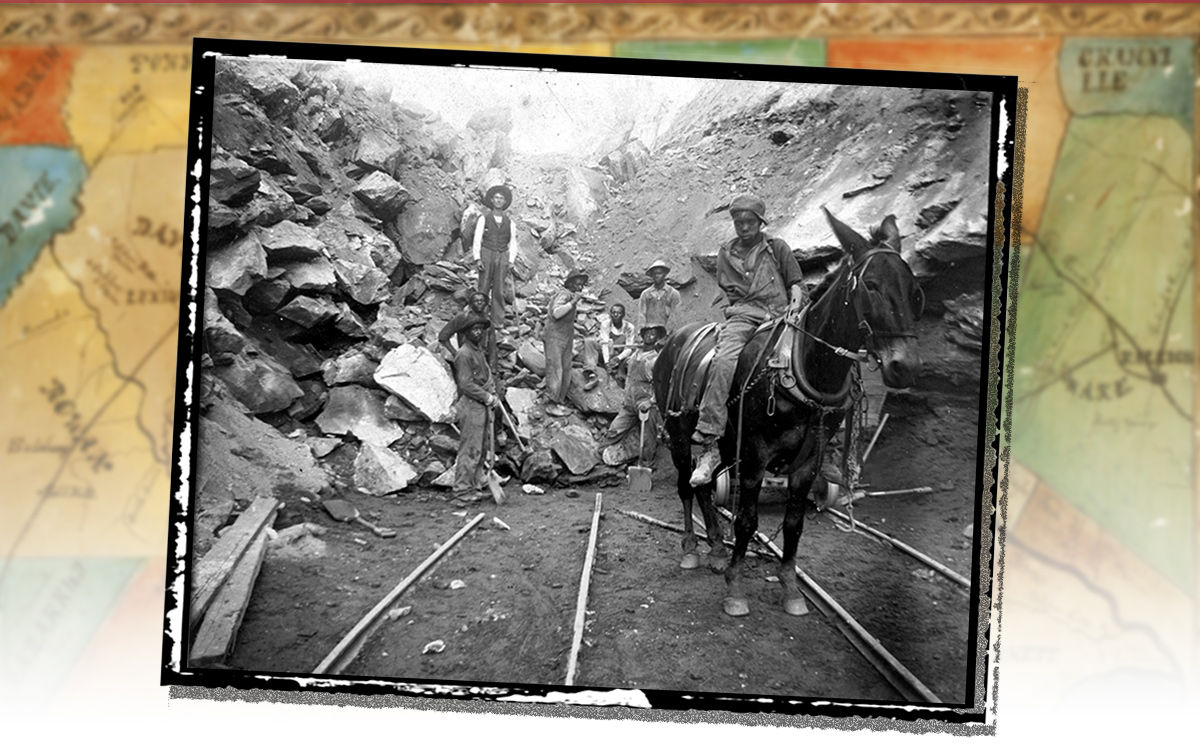 Laying track across the state from Goldsboro to Charlotte in the 1850s was grueling physical work, but when the task was completed, it gave North Carolina a much-needed reason to celebrate. That’s not to say  the process of building the North Carolina Railroad was always pretty. It featured acrimonious debate over the role of government; a contentious party-line vote in the legislature; unrealistic budget projections; cost overruns; compromises in the quality of work over the objections of the man charged with oversight; and labor by one group but profit by another. The story reads like something off the front page of today’s newspaper.

With the North Carolina Railroad authorized and mapped out, all that was left was laying track.

In late January of 1849, the legislature of North Carolina finally passed a bill that authorized the construction of a railroad across the state. The bill’s path to the vote had been an obstacle course of sometimes acrimonious negotiation, and in the end it was only a principled vote by Speaker of the Senate Calvin Graves that broke a tie vote in that chamber and turned the bill into law. Then came a planning process in which hard decisions had to be made with regard to mapping out the physical route of the new railroad. With that task completed, it was time for laying track.

All across the state – especially in those areas that would see the rail line pass through them – excitement and expectation were in the air. There was widespread hope that the new North Carolina Railroad would energize a state so economically, culturally and educationally stagnant that it had come to be known derisively as “The Rip Van Winkle State.”

On January 31, immediately after passage of the milestone legislation, the Raleigh Register newspaper gushed:

A late session of the Legislature will mark a new era in the history of the State… A great system of Internal Improvements has been adopted… which will shake off the incubus of lethargy and sloth for which we as a people have become proverbial.

All that was left was laying track across a huge segment of the state. It was an era when there was little mechanical help, and the bulk of the arduous work was done by mules and enslaved men.

When all was said in done – after five years of construction – this is what they created: The North Carolina Railroad ran 223 miles in a northern-bulging crescent from Goldsboro in the east to Charlotte in the west. It mostly avoided mountainous terrain, but crossed three rivers, the Neuse, Haw, and Yadkin. The lowest point of elevation was 104 feet above sea level at the eastern terminus of Goldsboro. The high point was 943 feet above sea level at a location in the middle of nowhere that would become – wait for it – the town of High Point. The western terminus at Charlotte was at an elevation of 743 feet.

The line was single track (with the exception of the occasional turnout) built at “standard gauge” of 4 feet, 8 1/2 inches between rails. The rails themselves were T-shaped rails imported from Wales – the first arriving in 1853 – and they weighed 60 pounds to the yard. (Modern rails tip the scales at between 110 and 150 pounds per yard.)

Construction costs averaged out to approximately $22,000 per mile, which was consistent with typical costs for railroads of that era in the southeastern United States. Several factors caused cost over-runs above the original budget. First, a binge in railroad building in the United States and in Russia drove up the price of iron. Second, US tariffs on imported iron inflated the price to the railroad by an estimated $1,500 per mile. And third, supporters of the proposed railroad had offered unrealistically low construction cost estimates, possibly in an effort to make the project more economically and politically attractive. That practice did not go unnoticed at the time and was called out as budget knavery. Thank goodness that could never happen today.

Efforts to stay within a tight budget led to numerous compromises in construction of the railroad, some of which had ripple effects on future expenses and operation. In order to reduce the amount of grading done for the roadbed, the railroad was built with more numerous ups and downs, some of them at a gradient beyond what was recommended. This meant that locomotives purchased for the road would have to be more powerful, and thus would cost more. The radius of some curves was tightened beyond specifications, leading to increased wear and tear on equipment and higher maintenance and replacement costs down the line. There were also deficiencies in quantity and distribution of ballast, in drainage ditches and culverts, and in cuts through higher ground. These later were supposed to be wide enough to permit installation of a future, parallel second track, and they were to be faced with rock. Often, they were neither. Such corner cutting led to repeated issues with flooding and rock slides, and it resulted in a number of fatal derailments.

Who wrought it. (And who got paid.)

Typical of large construction projects of the era, the physical labor to build the North Carolina Railroad was performed largely by enslaved people. In April of 1849, with the railroad just authorized by the legislature, an anonymous South Carolinian stepped forward with an offer to build the entire railroad within three years, using as many as 3,000 enslaved workers. He would accept as payment $100,000 in railroad stock.

The North Carolina Railroad turned down the offer. Instead, they offered construction contracts to landowners along the line. That way, they could use the prospects of a lucrative labor contract to induce a landowner into purchasing stock. On the flip side, some landowners dangled offers of budget-rate construction services in order to influence the railroad to cross their property. In the end, most contracts for construction were granted to stock subscribers – either land owners along the line or political movers who had shown support for the railroad. Very few of those who would oversee railroad construction efforts had the slightest relevant experience.

Walter Gwynn, the Chief Engineer for the North Carolina Railroad – and an internationally know expert in railroad design – was technically the man responsible for ensuring that local construction contracts were faithfully executed. But a report conducted by the General Assembly found that the railroad’s four directors often settled disputes over construction issues without consulting Gwynn. The Chief Engineer in fact disapproved of much work performed at the eastern end of the line, so much so that he never signed off with his approval. And it was at the eastern end of the line where many derailments would occur.

Landowners with railroad construction contracts used their own workers  and augmented their number with hired workers – including “a bunch of Irishmen who showed up in Hillsborough.” The contractors took their payment for such services 50% in cash and 50% in company stock.They frequently complained that they should receive 2/3 of their fee in cash.

Hired workers worked six twelve-hour days a week, for which they earned $9 or $10 a week. Such hiring caused labor shortages in some areas where railroad construction was in progress. A work gang of 50 hands could lay track at a rate of about 1.5 miles per week. It was hard work, plus, the railroad board of directors prohibited the use of “ardent spirits” among workers.

In November of 1851, the Greensboro newspaper described the work:

The array of carts and horses and wheelbarrows, and hands with their mattocks and shovels, digging and throwing up the earth, and passing and repassing like ants on an ant hill, presents most animating spectacle.

What comes after laying track? Celebration!

In 1851, John Motley Morehead, President of the North Carolina Railroad, made this prediction as construction began:

If the zeal to finish contracts shall equal that to procure them, we may surely hope ere long the shrill steam-whistle of your locomotives will awake the slumbering echoes of your hills and vallies, and the annoying question so often propounded, ‘will the N. C. Railroad ever be built?’ will be answered by your thundering trains

And thundering is exactly what the trains did. As they puffed into towns that had long felt cut off from the rest of the world, the people thronged to greet them. It was the cause for noisy celebrations up and down the line. And, as a coming post will show, that called for lots of barbecue!

A note on the photographs on this page: There are no known existing photos of the earliest days of the North Carolina Railroad, much less photos of the construction process. The photos displayed above are from a later era – almost certainly post-slavery – but I think they are appropriate here because they give a sense of how hard the work was and who did it.

The featured picture of a crew clearing a path through rock is courtesy the North Carolina Collection at Wilson Library, The University of North Carolina at Chapel Hill [P0031_192-NC]. It may have been taken on one of the later railroads in the western part of the state.

The two photographs of railroad crews at work are courtesy of NC Archives & History. [N_53_15_5089, N_80_5_7] The photo of a railroad crew posing along the track was taken on the Richmond & Danville Railroad. The “ant hill” photo is an 1870 photograph of work being done on the Southern Railroad.

The go-to book for the story of the early days of the NCRR is Allen W. Trelease’s book, The North Carolina Railroad, 1849 – 1871, and the Modernization of North Carolina. The book is published by UNC Press.