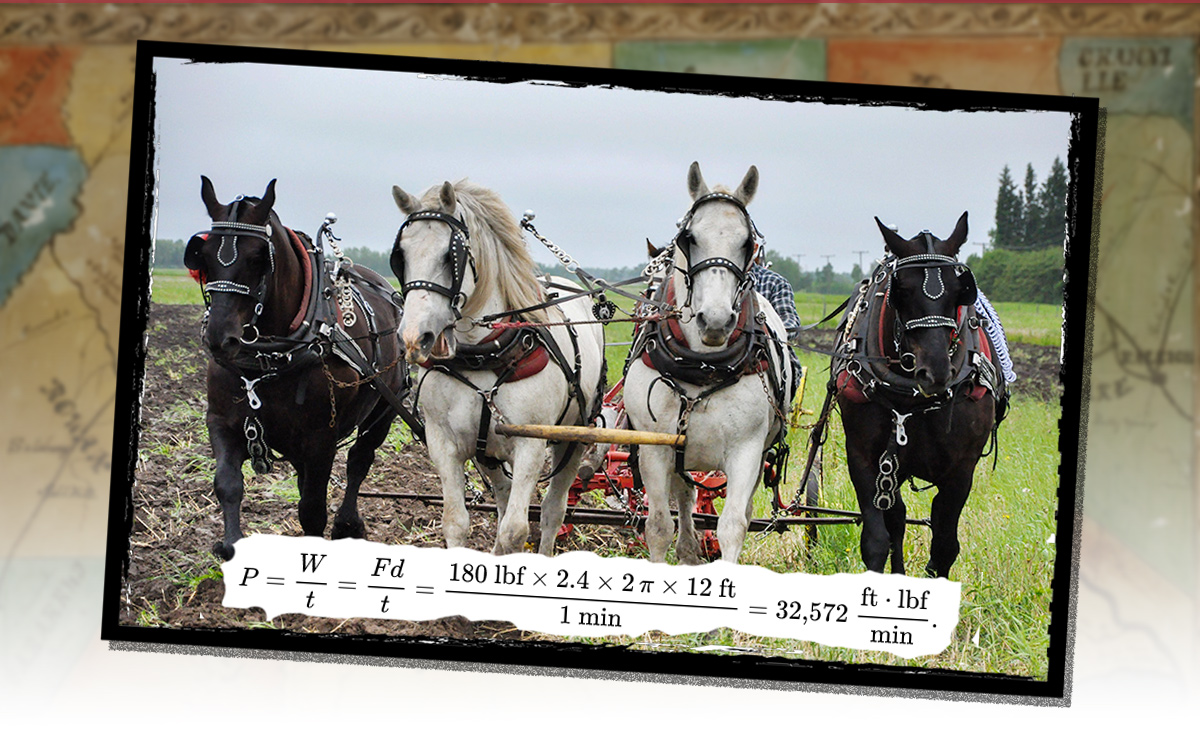 Horsepower: Even in the 1700s, It Was All About Marketing

As the Industrial Revolution produced mechanical devices to perform work, it was only natural to compare the productivity of an engine to that of the animals that had historically provided the muscle. So why don’t we talk about oxenpower or bullpower? And why was horsepower actually based on the work capacity of Shetland ponies. And not to get too picky, why is “one horsepower” not the amount of work one horse could accomplish in a given time?

On the Cornwall Peninsula, in the southwest region of England, tin had been mined since prehistoric times. Over millennia, mine shafts had been extended in search of new deposits, until by the 1600s, some of the shafts extended over a thousand feet under the sea. Such mines were prone to flooding from the seepage of water down through the rock, and keeping them in operation required constant pumping.

The pumping technology of the era might involve buckets to scoop up water or large balls of wool to soak up water, but either way, the water was extracted from the mine and brought to the surface by a chain loop. And that loop was driven by one or more ponies walking in a circle around a turnstile at the top of the shaft. (Shetland ponies were preferred over horses for mine work because their diminutive size allowed them to work in the shafts themselves.) The system worked, but it was expensive. A pony could only work for so long before it had to be rested. And fed. So in order to keep the pumps running, a mine was more likely to need ten or twelve ponies rather than just one.

Inventors in many countries were tinkering with the possibility of harnessing steam to produce power. Englishman Thomas Savery developed a device that used steam to generate the power to pump water, but his invention was severely limited in its power to lift water.

The big breakthrough came when  Thomas Newcomen in England invented an “atmospheric engine” that could accomplish the task of “raising water by fire.” The device was also known as a “beam engine” because in incorporated a massive rocking beam, or simply as the “Newcomen Engine.”

By 1715, the Newcomen Engine was in use in tin and coal mines around Great Britain. For a mine owner investing in a Newcomen Engine, the obvious question was how it compared in power and efficiency to he ponies he was already using.

James Watt does the math (with carefully chosen numbers)

In 1763, Scotsman James Watt was a young mechanical engineer employed at the University of Glasgow, where one day he was assigned the job of repairing a Newcomen Atmospheric Engine owned by the university. As he worked with the machine, Watt was intrigued with the idea generating power from steam, but he was also struck by how inefficient Newcomen’s engine was. Watt made improvements that dramatically improved the machine, and by 1776, he was selling the Watt Steam Engine to miners and farmers. (At the time, both the Newcomen Engine and the Watt Steam Engine were too heavy to be mounted on a vehicle, so they were both used as stationary units to pull, push, or lift heavy objects.)

A scientist with a marketing sense

James Watt was an engineer and an inventor, but he was also a realist. He knew that in order to sell his new and improved steam engine, he would need a marketing angle that would prove to a potential buyer – for example, a mine owner – that the Watt Steam Engine would represent an improvement over the animal power already in use.

Watt remembered the writings of Thomas Savery, inventor of a very early, primitive steam engine. In his 1699 book “The Miner’s Friend,” Savery had mused:

So that an engine which will raise as much water as two horses, working together at one time in such a work, can do, and for which there must be constantly kept ten or twelve horses for doing the same. Then I say, such an engine may be made large enough to do the work required in employing eight, ten, fifteen, or twenty horses to be constantly maintained and kept for doing such a work…

Watt recognized that if he could quantify the work capacity of the animals currently in use, it would give him an easily-understood metric which could be used to compare (favorably) steam power to animal power – and to establish the superiority the Watt Steam Engine over the competition.

Looking for a measurement

Watt began his quest for that metric by studying ponies operating the pump at a mine. To turn a shaft that caused the pump chain loop to bring water from deep in the mine to the surface, the ponies walked around in a circle with a radius of 12 feet, completing the circuit 2.4 times per minute. Based on his observation of the pulling power of a pony, Watt decided that a horse – a more powerful animal – would have a pulling power of 180 lbf. (A foot pound is the energy required to lift one pound a distance of one foot.)

Using those numbers, Watt came up with this calculation:

[By comparison, an average human bicyclist can sweat out around one horsepower of work over a very short sprint. Tour de France cyclists might double that work rate for a short distance, but over the entire race, they average less than one horsepower.]

Being a businessman as well as a scientist, Watt had taken some liberties with his assumptions. The short-term work rate of a horse is more like 15 horsepower, which would make it more productive than a steam engine. So instead of peak performance by the horse, Watt used what he calculated to be the horse’s average work rate over a full day.

In the end, it really didn’t matter that the whole calculation was to a large extent smoke and mirrors. Watt could claim with a straight face that the steam engine he was trying to sell worked at a rate of “10 horsepower.” It was an effective marketing angle – by 1804, Watt’s steam engine dominated the marketplace – and other manufacturers of steam engines began using it. The term caught on, and over 200 years later, we still compare machines by ranking their horsepower.