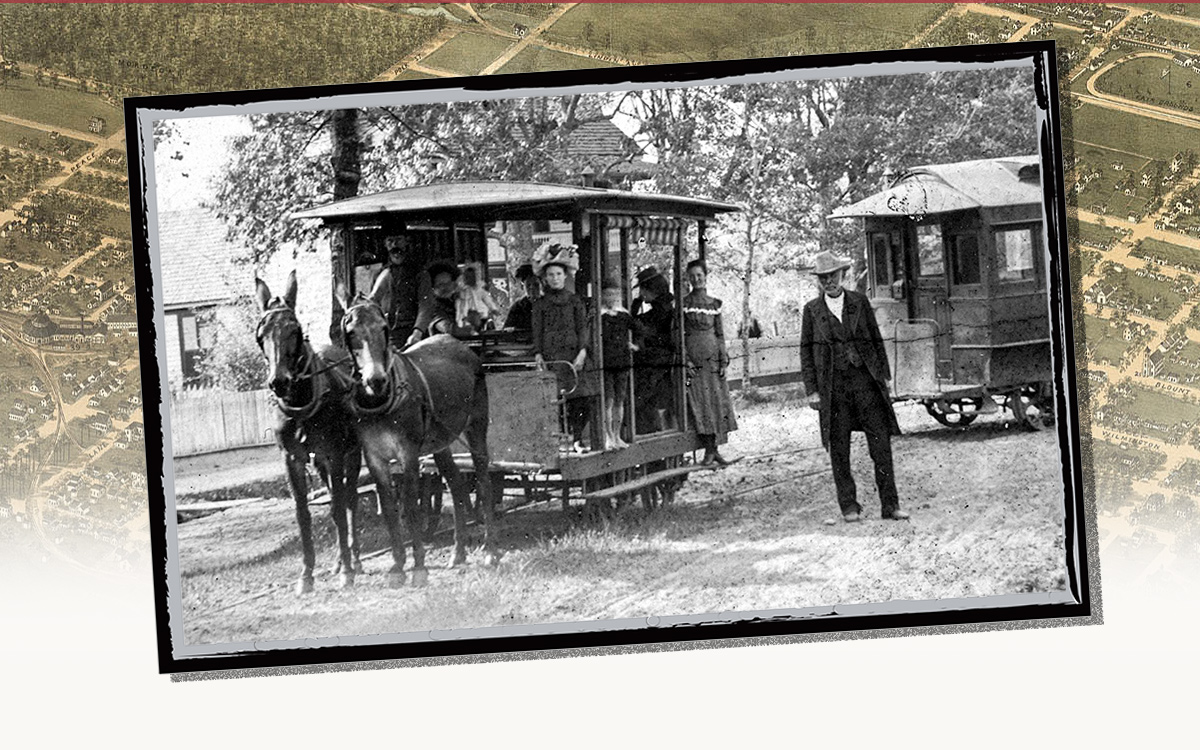 From today’s perspective, nothing in the history of transportation seems more benign than the horse trolley. Shown in the picture above is the “street railroad” in Hendersonville. The horse trolley was a phenomenon that flourished for only a short while in the last decades of the 1800s, but these people movers were the vanguard of a transportation revolution that would fundamentally change our concept of the city.

The era of horse trolleys (also frequently powered by mules, to be fair) began on November 26, 1832 when the New York & Harlem Railroad began operating on the streets of New York City. The initial phase ran along Bowery Street from Prince Street to 14th Street. We know this area now as lower Manhattan; at the time it was pretty much all there was of New York City. (Later, the rails would be extended far outside the city all the way to Harlem.) New Orleans followed with its own horse trolley in 1835.

The concept of horse/mule-drawn passenger cars running on rails along city streets – and conveniently stopping at each intersection – was an instant success.  By the mid 1880s, 415 street railway companies in the United States operated over 6,000 miles of track and carried 188 million passengers a year in horse trolleys. In 1890, residents of New York City took an average of almost 300 horse-car rides a year.

North Carolina climbs on board the horse trolley.

North Carolina was not far behind the curve in at least trying to join the trend. In 1867, the North Carolina legislature passed an act granting a charter to the Fayetteville Street Railway Company to operate a “two-mile street railroad propelled by animal or other power.” Nothing came of it. (A second charter was granted in 1889 to new owners, but again, nothing happened.)

In 1881, charters for a horse trolley were granted to both the Asheville Street Railway Company and the Raleigh Street Railway Company, and this time both became a reality. Raleigh’s trolley opened on Christmas Day of 1886 with four miles of track and four horse cars. Asheville’s line went into service February 1, 1889.

Other cities were chomping at the bit to join in. On January 1,1887, a horse trolley system opened in Charlotte with three streetcars working between “The Square” (the corner of Trade and Tryon Streets) and the city’s two main railroad stations. Each car was pulled by two mules and carried up to 12 passengers.

Also in 1887, the Durham Street Railway Company began operating, but they were in trouble from the start. Wagons attempting to cross the trolley tracks – which stuck up 6 – 8 inches above the street – began having accidents and demanding recompense. The company eventually went out of business, and the rails were removed. When electric cars became available, new tracks were laid.

In 1888, the Wilmington Street Railway Company opened its horse trolley with seven small cars operating on about five miles of track.

The end of the line

When they came on the scene in the late 1800s, horse trolleys were immensely popular. But in many ways, they carried the seeds of their own demise.

While they were effective carriers for ranges up to 2 1/2 miles, beyond that distance their slow speed made them inefficient for commuting.

Their very popularity could cause congestion. Because the cars were small in capacity, it required many of them to move the multitude of riders. In 1852 New York City, trolley traffic on Broadway was a staggering 230 cars each direction (north and south) each hour.

The horsepower for all those cars was problematic in several ways. Horses in general (not just trolley horses, but they contributed their share) produced significant pollution. The New York City sanitation department estimated in a late 1800s report that horses deposited 2.5 million pounds of manure and 60,000 gallons of urine on the streets every day. In one year, the department had to cart off 15,000 dead horses abandoned at the curb.

And it took lots of animals to power a two-horse trolley car. A horse could only work four or five hours a day, so a streetcar company typically stabled ten or more horses for each car in operation. And working or not, those horses had to be housed, groomed, fed, and cared for each day. The bottom line was that horses were an expensive energy source. And the average life of a trolley horse was only two years, so acquisition of new animals – not a trivial expense – was a constant need.

All these things worked against the sustainability of the horse trolley, but the cause written on the death certificate of the horse trolley industry was “electrification.” With the coming of electricity to the cities, trolleys would be electric, giving them longer range, larger capacity, and greater ability to handle hills. By the first years of the 20th century, the horse trolley had reached the end of the line.

The Horse Trolley changed our understanding of the city.

The horse trolley was a short-lived phenomenon, indeed, thriving for less than four decades. But it was the vanguard of a transportation revolution that would shatter people’s centuries-long understanding of how a city functioned.

In all human history, cities had necessarily developed in such a way that virtually everyone lived within walking distance of their work. The horse trolley began to break that model. Suddenly, a city dweller could live several miles outside the city, where the air was not choked with coal smoke, the streets not littered with garbage, the houses were spaced farther apart, and there was ready access to healthy, open spaces.

In 1890 Charlotte, developer Edward Dilworth Latta saw the future and purchased the city’s horse trolley system outright. He extended the rails to the outskirts of the city, where he was building a new neighborhood that many scorned as being impossibly far removed from city center. He called his new development “Dilworth.” Latta shortly converted the horse trolley system to electric power – just then becoming available – and pushed the line past Dilworth. Still farther out, he built Latta Park, a recreation area that attracted riders on his electric trolley. And every one of those riders got a good sense of the possibilities of living in Dilworth as the trolley passed by the new houses springing up. Maybe this “suburb” wasn’t so far removed after all…

It was a pattern that would be repeated major cities across North Carolina: Extend the trolley tracks farther and farther beyond the city limits, give the people a destination – and therefore a reason – to ride the trolley, and let them see that one didn’t need to live where they worked. In fact, life could be better in that no-man’s-land between city and farm.

The electrification of trolley systems around the turn of the 20th century made the pattern workable, and the arrival of the automobile would speed up he process. But it was all those hard working horses clopping slowly along their short sections of track that pointed the way to the modern city.

Photo of Washington DC horse trolley courtesy of the Library of Congress [3a20135u].

River Fords: Let Us Cross Over…