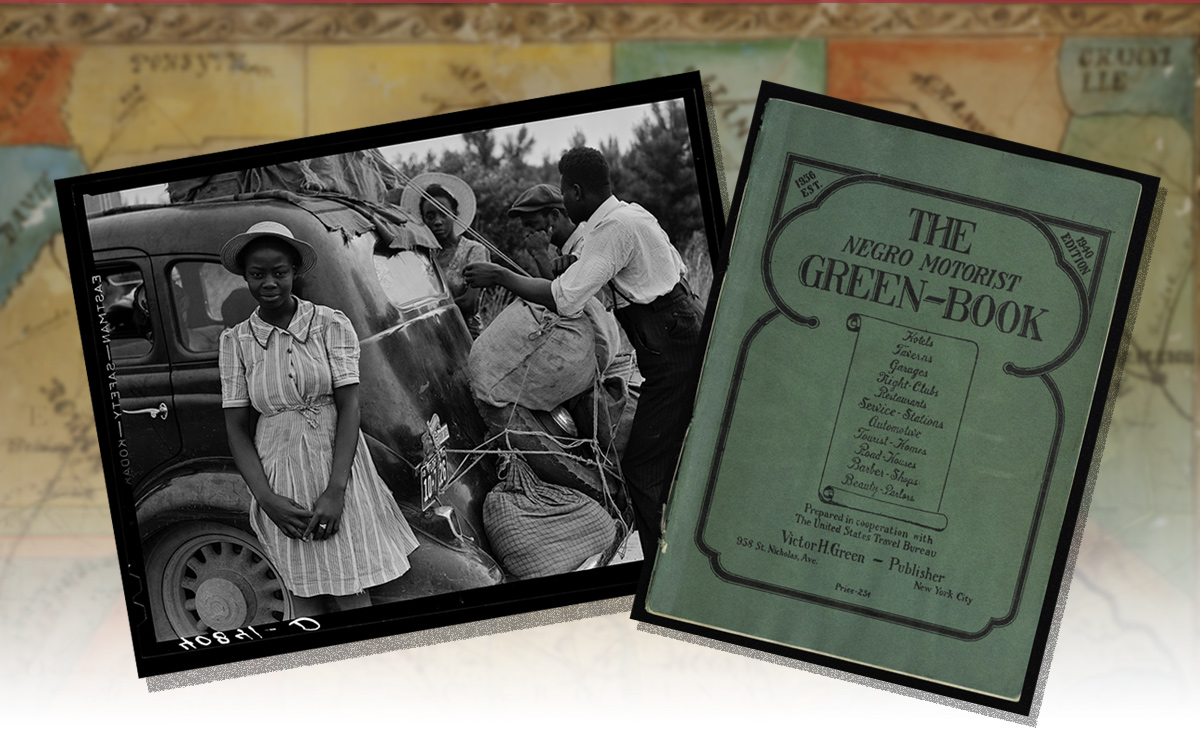 The Green Book in North Carolina

“The Negro Motorist Green Book”, first published in 1936, was an essential tool for the black motorist in the first half of the 20th century. In the American South, the early decades of motoring overlapped with the region’s most virulently racist era. Jim Crow laws mandated de jure racial segregation, and long-standing social norms not only imposed further de facto segregation, but often exacted violent punishment for the slightest perceived transgression. Black motorists were confronted by challenges largely unknown to white travelers, including when they attempted such simple – and necessary – elements of traveling as filling their gas tank, eating a meal, or finding a place to rest at the end of the day. And these difficulties went far beyond mere inconvenience. For the black motorist seeking such services in an unfamiliar region, the slightest miscalculation could suddenly turn a commonplace activity into one of humiliation, brutality, or death. The Green Book was a black traveler’s guide to safe places; it was also an act of resistance against the widespread racial discrimination of the time.

Before 1920, there was little black ownership of automobiles. But in the 1930’s, auto dealers began to advertise in black newspapers in an attempt to reach “our colored farmer friends.” The introduction of buying a car on credit helped expand ownership, including to blacks.

The private automobile offered to its owner a previously unachievable level of mobility and personal freedom. And for black people in the Jim Crow South, it offered something else: freedom from the daily humiliation of riding public transportation. Waiting rooms and on-board seating were strictly segregated for trains, trolleys and buses. And facilities for blacks were commonly inferior to those reserved for whites. A black rider who boarded a bus at the front and paid the (always white) driver the fare might be required to exit the vehicle and re-enter at the rear, where the “negro section” was located. And when seated near the dividing line between the races, a black rider might be summarily ordered to move to a different seat in deference to a white rider.

The private automobile allowed an escape from that humiliating world, so blacks found in cars a dignity that transcended a simple desire for mobility. And when they made their choice of an automobile to purchase, they often reflected another facet of the Jim Crow world they lived in: the inconvenience and danger black people routinely faced on the road. They tended to buy larger, sturdier cars that enjoyed a reputation for high reliability. Many whites saw blacks buying a large car as a simple desire to show off, or to announce that they were as good as any white motorist. The caricature of a black man driving a Cadillac became just one more Jim Crow era stereotype used to ridicule blacks as vain and infantile. But in fact, there was a quite different psychology behind a black motorist purchasing a bigger, better car. When blacks traveled the roads, there was no guarantee they would find a restaurant that would serve them; a gas station that would let them fill the tank, much less use the rest room; or a hotel at which to pass the night. A bigger car let them carry more supplies, such as picnic hampers, a portable potty, and a reserve can of gasoline. A large back seat could serve as a resting place over a hotel-less night. And quality mattered because being stranded on the road with a mechanical problem – with the local white mechanic unwilling to work on a black man’s car – might well put them in a dangerous situation. This was an era of significant Klan activity, of lynchings for the slightest perceived provocation, and of “sundown towns” that proudly posted highway billboards saying, “Nigger, don’t let the sun set on you here.” Buicks in particular were valued for high reliability that might take the black motorist on down the road from such evils.

Black motorists were vigilant for threatening situations, knowing full well that in the event of violence, local authorities often would  be of little help. Henry Shepherd spoke of traveling North Carolina roads in the 1950s and 60s:

You didn’t want to get somebody throwing something out the car window and they hit you upside the head with a beer bottle or a brick… If you reported it to the police, they he would say, ‘Ah, they’re just having a little fun.’… You have to maneuver these things because you don’t have the same rights as everybody else.

But even when black motorists could avoid physical violence, there was the constant specter of humiliation. Sidney Jones, Jr. related the story of traveling by car with his family in the 1960s. In need of gas, they stopped at a filling station that was willing to take their money but not to grant his father a shred of dignity in front of his family:

We had just come through Virginia… We stopped at a gas station. I think I was probably only nine or ten. The boy who came out to wait on us, he was about the same age. My father, he got outside the car, and he was telling him what he waned. And the little boy said, ‘Is that all you need, boy?’

Civil rights icon John Lewis recalled how his family prepared for an automobile trip in 1951:

There would be no restaurant for us to stop at until we were well out of the South, so we took our restaurant right in the car with us…. Stopping for gas and to use the bathroom took careful planning. Uncle Otis had made this trip before, and he knew which places along the way offered “colored” bathrooms and which were better just to pass on by. Our map was marked and our route was planned that way, by the distances between service stations where it would be safe for us to stop.

A guide to "oasis spaces"

In 1936, Victor Hugo Green, a World War I navy veteran and a postal worker in Harlem, New York, experienced racial discrimination when traveling by automobile with his wife, Alma. At that time, it was perfectly legal for a business to refuse service to a customer on grounds of race. Determined to help other black motorists avoid his experience, he began collecting information about businesses in his area that would serve blacks. (There had been earlier guides created for Jewish travelers, who frequently experiences similar discrimination.)

…to give the Negro traveler information that will keep him from running into difficulties, embarrassments and to make his trip more enjoyable.

The book was an instant success, and in 1938, Green expanded its scope to include the Midwest and most of the East Coast, including North Carolina. He received advertising support from black- and white-owned businesses. Standard Oil/Esso was extremely supportive, including selling the book at its many service stations. (Esso was a leader in pushing for racial equality, allowing black franchise owners, and employing black scientists, engineers and marketers.)

Green – and after his death, his wife – published the book from 1936 to 1966 as The Negro Motorist Green Book, The Negro Travelers Green Book, and finally, The Travelers Green Book. In 1938, the book sold for $0.25; by 1957, it cost $1.25. At the height of its popularity, the Green Book sold 15,000 issues per year, and it expanded to include international destinations, as well as to offer advice on automobile maintenance, on safe driving practices, and on the motorist’s civil rights. Whatever the full, official name of the publication at any given time, to the black travelers who relied on it, it was simply “The Green Book.”

The weary traveler in North Carolina

Among the North Carolina businesses listed in the Green Book were respected hotels in Raleigh, Durham, Greensboro and New Bern.

The Lightner Arcade and Hotel on East Hargett Street – in the middle of the black business and cultural district – often entertained famous musicians, including Duke Ellington and Count Basie. The building was destroyed by fire in 1970, and the site was taken over by the municipal bus depot.

The Biltmore Hotel, built in 1929, stood in Durham’s vibrant Hayti neighborhood. It boasted of being “America’s Finest Colored Hotel,” and included a drug store, grill and coffee shop. Like the Lightner in Raleigh, the Biltmore hosted famous musicians. The building was demolished in 1977 when NC Highway 147, the Durham Freeway, was bulldozed through the neighborhood. Today, the property is a parking lot just southeast of Roxboro Street.

The Magnolia Hotel at 442 Gorrell Street was established around 1949 in what had originally been a 6-bedroom private residence dating from 1889. The hotel was well-known to black travelers between Atlanta and Richmond, and it counted as its guests notables such as Ray Charles; Tina Turner; Martin Luther King, Jr.; Jackie Robinson; Sachel Paige; Lena Horne; and James Baldwin. The Magnolia stopped operating as a hotel some time in the 1960s or 1970s, but the structure has been renovated to function as a venue for dining and events. The building is on the National Register of Historic Places.

In New Bern, sisters Amy, Charlotte, Henrietta and Carrie Rhone opened the Rhone Hotel, convenient to the railroad station, in 1923. The original address was 42 Queen Street, but today the structure – now an apartment building – is listed as 512 Queen Street.

With passage of the landmark Civil Rights Act of 1964, many of the racially discriminatory practices that had plagued black travelers became illegal. They did not disappear, social norms being easier to legislate against than to stop in practice. But the days when a black motorist would not think of traveling without the Negro Motorist Green Book were over, and the pamphlet soon ceased publication. Victor Hugo Green had not lived to see the new era, having died in 1960. But he believed a change was going to come, and he was eager to embrace that change even though he knew it would mean an end for the work to which he had dedicated his life.

There will be a day sometime in the near future when this guide will not have to be published. That is when we as a race will have equal opportunities and privileges in the United States. It will be a great day for us to suspend this publication for then we can go wherever we please, and without embarrassment. But until that time comes we shall continue to publish this information for your convenience each year.

The photo in the header and the photo of the “colored waiting room” are courtesy of the Library of Congress.

For a look at the black motorist’s world before the Civil Rights Act of 1964, I recommend Gretchen Sorin’s book Driving While Black (Liveright Publishing Corporation, 2020).