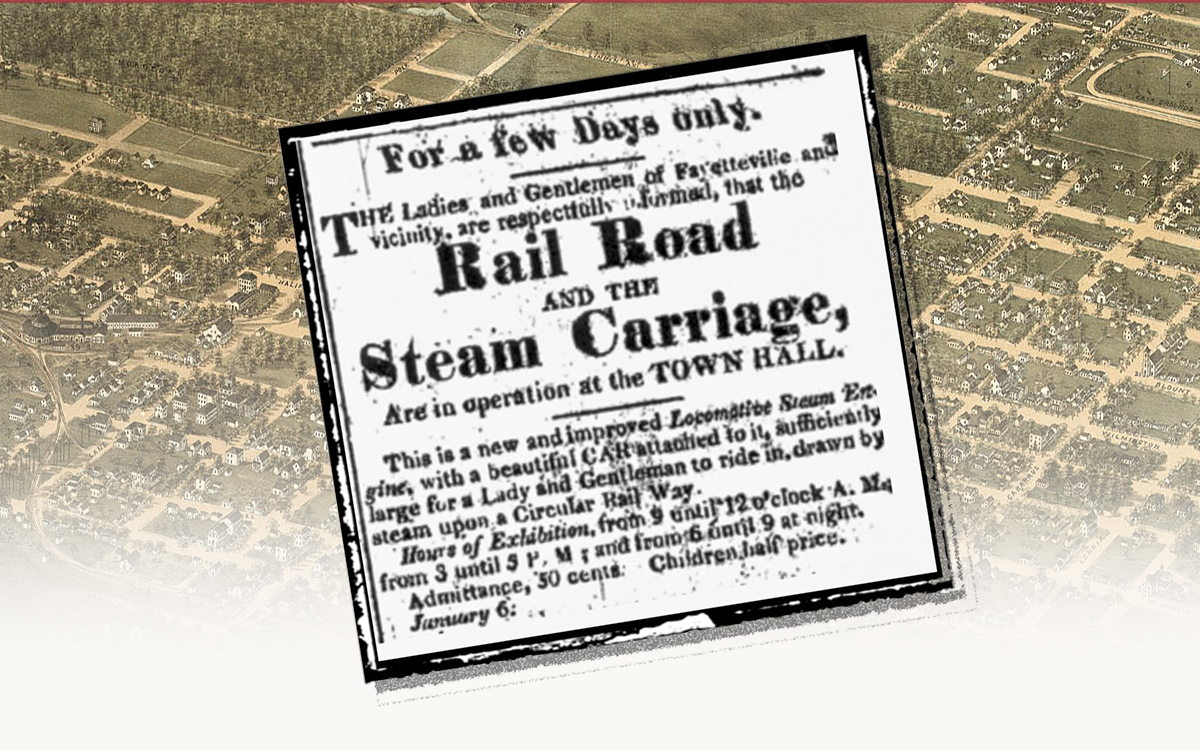 At the dawn of the age of railroads in the United States, one North Carolina visionary proposed striding boldly into the new age by building a rail line across the entire state. Instead, two cities built modest, local experimental railroads. Instead of striding boldly, the state took baby steps to evaluate what was, in the 1830s, a promising but immature technology.

At a Chatham County meeting, a visionary proposal for for rail in North Carolina

In the early 1800s, the railroad was a promising new transportation technology, and tracks were starting to appear up and down the east coast. Work was already underway on railroads in Maryland and South Carolina, and those projects threatened to leave rail-less North Carolina at a competitive disadvantage. Joseph Caldwell, first President of the University of North Carolina, did not want his state to be left behind.

In 1827, Caldwell wrote a series of public letters, “The Numbers of Carlton,” extolling the potential of a railroad across the entire state. And in 1828, he convened an open meeting at the farm of William Albright in what was then Chatham County. (The property is now Alamance County.) Intense public interest in the new transportation technology was evident by the fact that more than 200 people convened to hear Caldwell present his case.

North Carolina would eventually take the giant step of creating a trans-state railroad when it created the North Carolina Railroad Company. But rail transportation was new to America, and baby steps were required first. Experimental railroads would allow the state to evaluate the utility and appeal of the new technology.

In 1830, Fayetteville set up a modest experimental railroad – really more of a demonstration than an operational railroad.  At Town Hall, a tiny steam locomotive chugged around a small circle of track pulling a two-seat passenger car. The public was invited to take a ride, with tickets priced at 50 cents for adults and 25 cents for children. The January 6, 1830 newspaper advertisement featured above boasts:

For a few days only.

The Ladies and Gentlemen of Fayetteville and vicinity are respectfully informed that the Rail Road and the Steam Carriage, Are in operation at the TOWN HALL.

This is a new and improved Locomotive Steam Engine, with a beautiful CAR attached to it, sufficiently large for a Lady and Gentleman to ride in, drawn by steam upon a Circular Rail Way.

It was North Carolina’s first view of a steam-powered locomotive.

In 1830, spurred on by Joseph Caldwell’s meeting and the public enthusiasm it showed, the North Carolina legislature chartered several railroads. Among the first was the Fayetteville Rail Road Company, under the leadership of president James Seawell. In March of 1834, the company began construction on a rail line from Fayetteville to Campbellton on the Cape Fear River, a distance of about 2 miles. By July, the public could ride in a horse-drawn car along a completed half-mile section of the line. And by September, the line was complete from Campbellton to the Willkings & Company Auction Store in downtown Fayetteville. It remained a horse-drawn railroad, which may have been for technical or budget reasons, but it also may indicate that at the time, the jury was still out as to whether a tiny steam locomotive would be more efficient at pulling carriages than the trusty old horse.

On June 21, 1831 n Raleigh, fire destroyed the state capitol building. The legislature appropriated $50,000 to rebuild, and work began on a new stone structure, which still stands at the center of modern Raleigh. Construction required the transport of cut granite to the building site from a quarry out in Wake County, about a mile and a quarter away.

Sarah Hawkins Polk offered that her son Leonidas Polk, a graduate of the US Military Academy, and thus knowledgeable about engineering, had told her about a similar project in Massachusetts. To build a stone monument commemorating the Revolutionary War battle at Bunker Hill, laborers had transported cut stone to the building site using a horse-drawn cart running on wooden rails. Wouldn’t that work in Raleigh as well?

Some have questioned whether Sarah Hawkins Polk was actually the first to suggest Raleigh’s experimental railroad. Joseph Gales, who served as  president of the line, claimed it was his idea. But David L. Swain and William Peck, both of whom were involved in the project, remembered that Mrs. Polk was the one. Some years later, Peck toasted Mrs. Polk at a railroad gathering, referring to her as:

The distinguished female who suggested the construction of the Raleigh Experimental Rail Road; the first ever seen in North Carolina—She well deserves a name among the benefactors of our State.

Whatever the source of inspiration, in late 1832 the legislature chartered The Experimental Railroad Company. The railroad was built at a cost of $2,700, and the horse-drawn cars began carrying granite blocks from the quarry down to the eastern end of New Bern Avenue and then west to Capitol Square. The cornerstone for the new capitol was laid on June 4, 1833.

But the experiment’s success and impact went far beyond hauling stone. On Sunday afternoons, when there was no construction activity, the Experimental Railroad Company invited the public to take an excursion ride in the railroad’s “handsome car.” People came from far and wide for the novel experience. They also came from the legislature, with representatives climbing aboard to savor the experience firsthand.

The Fayetteville Rail Road Company and the Raleigh Experimental Railroad were, in themselves, baby steps into the railroad age. But they galvanized public interest in the possibilities of the new technology, and they prodded the North Carolina legislature to support the building of more railroads. Baby steps quickly led to giant strides.

In July and November of 1833, two Internal Improvement Commissions recommended that the General Assembly support the efforts of private capital to build additional railroads in North Carolina.

In Virginia, railroad interests had laid track from Petersburg south to the tiny hamlet of Weldon, just across the Roanoke River in North Carolina. The prospect of a rail line linking North Carolina to Virginia – and the industrial northeast – energized efforts to build a north/south railroad that would connect with the line at Weldon. Those efforts would result in not one, but two competing railroads, The Wilmington and Weldon and the Raleigh and Gaston. And it would make sleepy Weldon one of the most important railroad towns in the United States.

There is an NCDOT historical highway marker for the Experimental Railroad on Wilmington Street in downtown Raleigh.