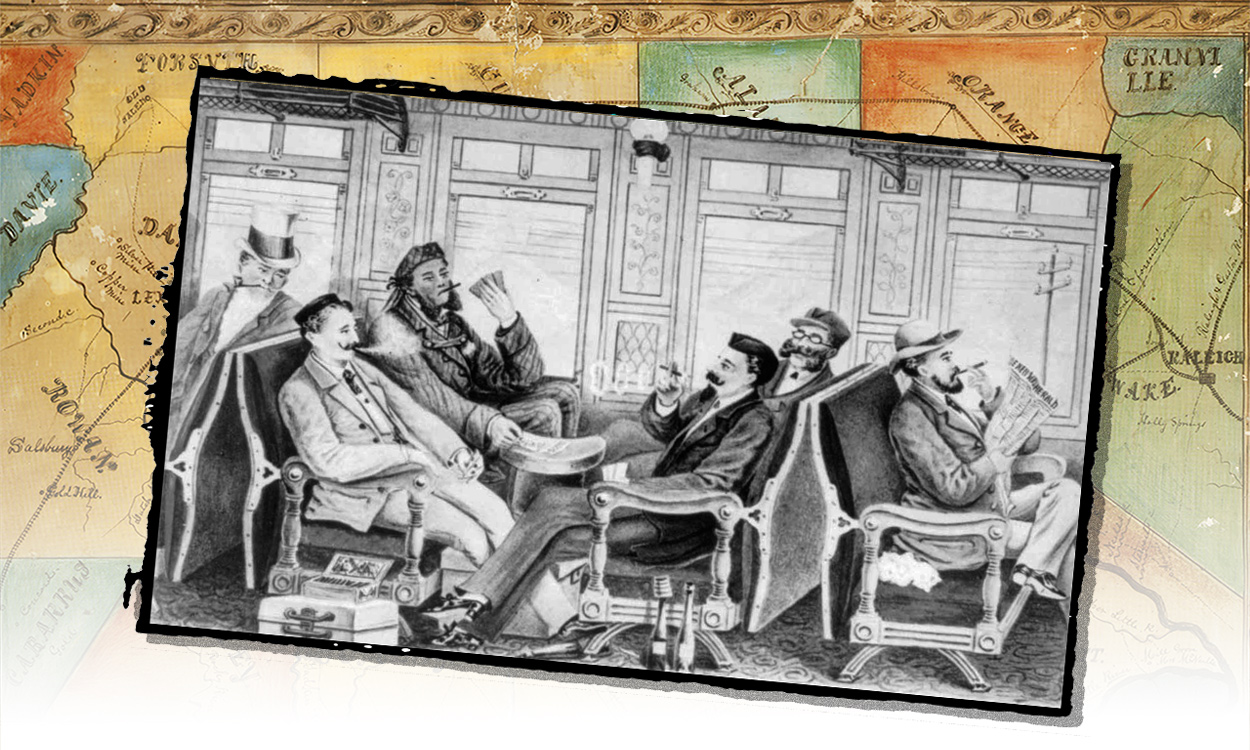 Early American rail travel was strictly segregated by race and gender, but in some ways it was pure democracy.

Early railroads in the American south embraced the race and gender segregation norms of the society they served. A railroad train circa 1850 might have three dedicated cars. Ladies had their own coach car, also available for children and for male escorts. Black riders either had their own “negro car” or were relegated to the mail car. Some accounts indicate that immigrants might also have been dispatched to ride with the blacks.

The primary coach car or cars were for white men. And it was in that microcosm that a new and provocative spirit of equality prevailed.

Unlike railroad service in Europe, American railroads had no class distinctions. A white male rider did not purchase a ticket identified as first, second or third class. And cars were not segmented into compartments with private entrances. A rider simply bought a ticket and got on board, or he bought a ticket on board from the conductor.

Once on board, he was in a long open car with bench seats along both sides of a center aisle. A rider might wander up and down the aisle to visit with other passengers. Or he might roam from car to car. When he was ready to light on a bench, he sat wherever he chose.

In cold weather, choice seats were near the wood stove, both for the warmth and for the fine crackling sound made when the rider’s projectile spit from his chaw hit the hot stove. (There were spittoons, but how much more fun it was to use the sizzling stove as a target. However, not everyone was as adept at this as they thought, and coaches were notoriously festooned with viscous gobs of tobacco juice on the seats, windows and floors.)  Chewing and spitting were so prevalent that Charles Mackay, an English newspaper editor, suggested the American national emblem should be redesigned so that instead of the eagle clutching thunderbolts in his talons, the bird would carry spitoons.

Foreign travelers were amazed by the lack of class consciousness on American railroads.

Many European travelers, especially the English, found this classless interaction – this rampant democracy – to be shocking and quite possibly harmful.

Thomas Low Nichols complained that  the lack of class distinction in America was repulsive. William Chambers found the lack of class consciousness to be harmful to the manners of the better class of traveler upon whom “certain obnoxious practices should obtrude themselves.”

Thomas Cather thought that in the United States there was:

… a desire among the mass to produce a perfect equality by reducing those above them to their own standard.

One man thinks of himself as much entitled as another to dub himself gentleman. If they could assume the character along with the name, it would add immeasurably to the comfort of those who travel among them.

But when he described the social tapestry in his railroad car, Cather seemed more fascinated than repelled by his fellow travelers:

… the slaveholder from the South, the abolitionist from the North, the Congress Man, the lawyer, the artizan, and laborer, all huddled together in glorious equality, smelling of anti-fogmatics, and in the most independent manner, spitting and smoking almost in each other’s faces.

[An antifogmatic was an alcoholic drink taken in the morning to brace one self before heading out into inclement, especially damp, weather.]

Based on his own travels in America, English author Charles Dickens offered some cautionary advice about riding trains in the south: In a presidential election year, when democratic passions ran high, given the close quarters and the “insufferably close” and “too hot” wood stove, it was best not to introduce politics into the conversation.

Photo courtesy of The Library of Congress [3b02142u]

For a good read on this era of southern rail, I highly recommend Travel on Southern Antebellum Railroads, 1828 – 1860, by Eugene Alvarez. (University of Alabama Press, 1974)