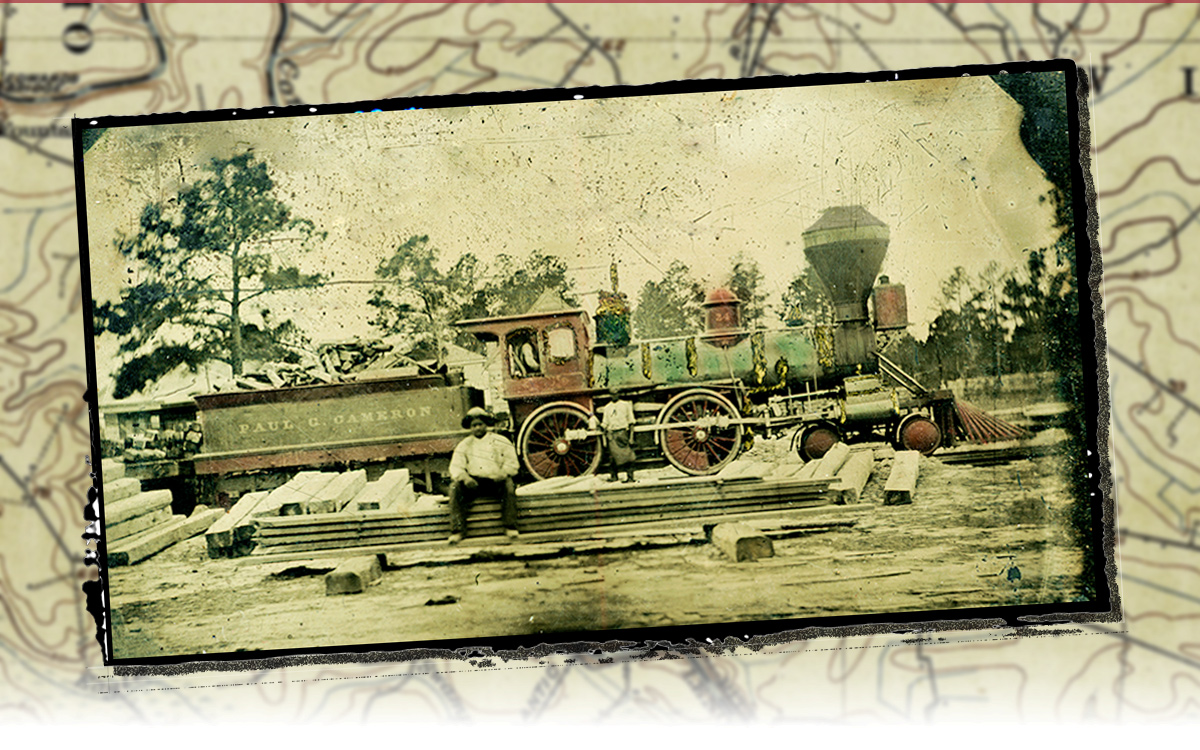 The hand-tinted Daguerreotype above is a unique window onto an early era of railroading when rolling stock was colorful both in decoration and in name. This image of the North Carolina Railroad steam engine “Paul C. Cameron” was made sometime between 1865 and 1872, and it shows a level of decoration typical (maybe even a little subdued) for the colorful locomotives of that age.

By the turn of the Twentieth Century, railroad locomotives were commonly referred to by a number. For example, the folk-song-famous train that careened off the Stillhouse Trestle near Danville, Virginia in 1903 was pulled by Southern Railway locomotive 1102, while the entire train – a “fast mail train” – was commonly, affectionately, and even proudly known as “The Old 97.” And when the train wrecked, it entered folklore as such.

Even with their names, numbers still adorned and identified locomotives. The Paul C. Cameron steam engine (top of page) bore that name, but it still displayed its number – 24 – on the front.

The earliest American railroads, in the 1830s, tended to be plain in appearance. But beginning around 1840, there was a trend toward more colorful – even gaudy – rolling stock. At the North Carolina Transportation Museum in Spencer, a replica of the Raleigh and Gaston Railway‘s first locomotive, the Raleigh, has red wheels and a green boiler.

A decade later, when the North Carolina Railroad was created, colorful rolling stock was the norm. The railroad did not keep detailed records of its paint schemes, and researchers have found very little in the way of written descriptions of the era’s trains in contemporary sources. But paint inventory records from locomotive and railroad car manufacturers of the period reveal a predilection for red, yellow ocher, vermilion, Venetian red, chrome yellow, and green.

The color scheme shown on the locomotive Paul C. Cameron (in the featured picture at the top of the page) seems to have been a favorite: red wheels, green boiler and flat black smokestack and smoke box. Ornate lettering and artistic scroll work seem to have been common. An 1869 description of the North Carolina Railroad locomotive named after Governor William W. Holden reveals an engine sporting “Gov. Holden” in brass lettering on its sides and flying flags. The tender was said to have on each side a portrait of the governor on each side accented by ornate scroll work. Above each likeness was a painted eagle carrying in its beak a scroll saying “North Carolina Railroad.”

Inside locomotive cabs, a natural wood treatment was popular. Crews tended to be assigned permanently to a single engine, and many took great pride in their “ride,” routinely polishing every surface to a shine.

Passenger cars of the era were equally festive. Essentially, they were simple rolling wooden boxes, structurally little different from a boxcar. But where a box car might cost $700 to produce, passenger coaches tended to cost between $2,000 and $5,000. That difference in cost was attributable largely to decoration, including bright paint jobs. Before 1870, the most common body color was some version of yellow, but other colors used included light blue, pea green, gray green, and Indian red. Yellow was a popular choice because it was believed to hide the clay dust that inevitably coated it. And it served as a nice background for ornamentations in vermilion, ultramarine, and lake, as well as gold and silver leaf. Passenger car interiors were often highly ornamental inside as well, featuring illustrated panels, scrollwork, striping and rich carpeting.

The bright, shiny rolling stock of the North Carolina Railroad seems to have been popular with the public. In 1855, The Hillsborough Recorder admired the first trains arriving in that town from Goldsboro:

On the Central road may be daily seen trains of new and elegant cars propelled by splendid and powerful engines, speeding their way through the heart of the Old North State.

Others had a more Calvinist view, especially those railroad administrators responsible for counting pennies. In 1860, a North Carolina Railroad inspection committee report contained the snarky recommendation that…

…hereafter every thing that rolls on the track of this road shall issue from the shops of the Company, substantially fashioned to suit the conditions of the Company and the taste of a plain people.

The colors live on

Be that as it may, who wants to remember a drab railway? Luckily, we can see restored steam locomotives that proudly wear the colorful ornamentation of the mid-1800s.

And the North Carolina Department of Transportation is on board with the 1800s North Carolina Railroad naming tradition. Currently, locomotives operated by NCDOT in its daily passenger rail service between Raleigh and Charlotte carry the names of North Carolina cities and towns that have station stops, such as City of Salisbury, City of Rocky Mount, Town of Wilson, and Town of Selma.

Colorful names and bright colors seem appropriate since these locomotives and coaches are traveling along the historical corridor of the original North Carolina Railroad. And It just stands to reason that when you ride the rails, knowing that you are riding in coach #400014 is not going to bring you any comfort. But riding in Sweet Potato? Now you can relax and enjoy the ride.

For railheads: To see a full list of NCDOT locomotives and passenger coaches with names, numbers, and technical specs, visit these two unofficial sites: http://www.on-track-on-line.com/amtk-roster-cars.shtml#NCDOT and http://www.on-track-on-line.com/amtk-roster-engines.shtml#NCDOT. Both sites present information gleaned from Amtrak sources, but neither is officially connected with that organization.