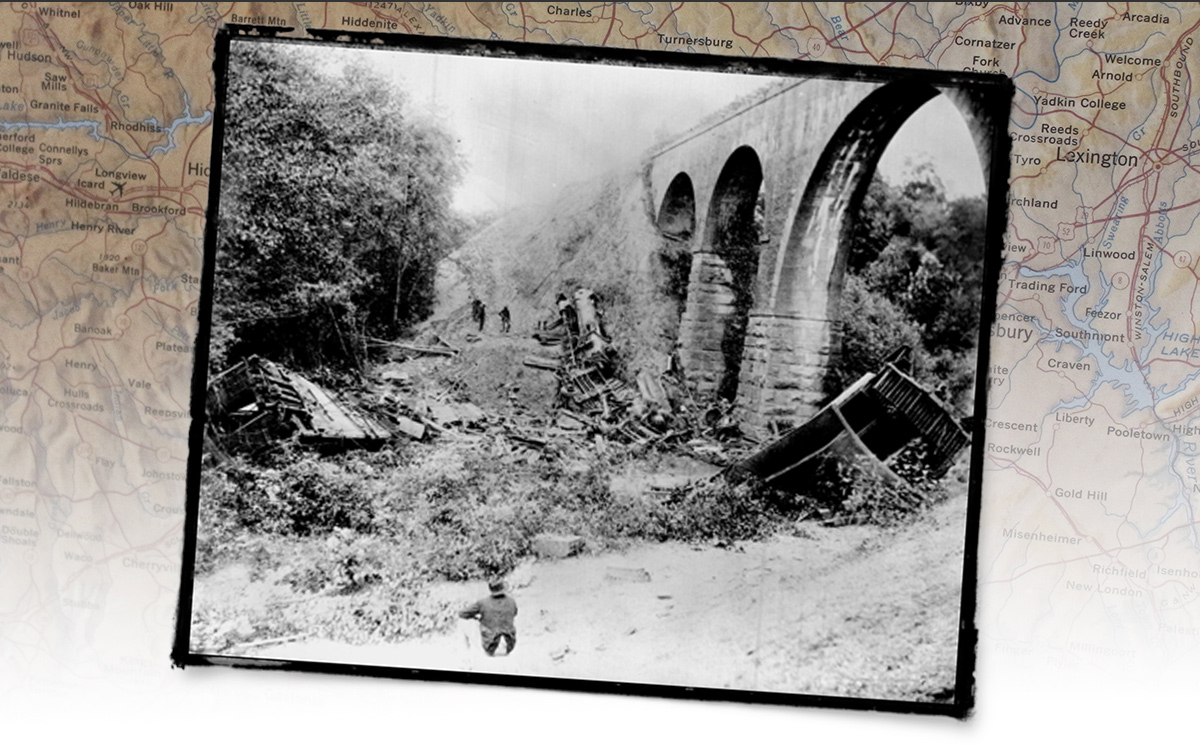 "A Great Wreck! A Frightful Accident!"

At 2:30 in the morning on August 27, 1891, Richmond & Danville Railroad Passenger Train No. 9 departed Statesville depot westbound. It would would cross Third Creek using Bostian Bridge, and then it would swing south to Asheville. The engine pulled six cars: a tender, a baggage car, a second-class car, a first-class coach, the Pullman sleeper car “Saluda,” and the private car of the Richmond & Danville’s superintendent. Superintendent R. R. Bridgers was not aboard.

Employees at the station would later remember that the departing train was 34 minutes behind schedule and that engineer William West seemed determined to make up the lost time.

Two miles west of Statesville, the rail line crossed Third Creek on the Bostian Bridge, a 60-foot-high, five arch, brick tower bridge. Train No. 9 had come down a grade at 25 to 40 miles per hour and was crossing the span when the entire train derailed and plunged off the north side of the bridge into the creek bed far below.

Two or three survivors, including George Bowley, traveling for the Atlanta Rubber Company, managed to walk back to Statesville to report the carnage.

Statesville was not equipped to handle a disaster of this magnitude.

Statesville had no official emergency response team, so citizens rushed to the bridge in buggies and wagons to offer assistance. They found some dazed passengers sitting on top of the wreckage. Rescuers used axes to cut open the rail cars and drag out other passengers, both living and dead. Statesville had neither hospital nor morgue, so the dead were tagged and laid out side by side in the Farmers’ Tobacco Warehouse. Hotels and private homes took in the injured survivors.

Later that morning, Statesville's newspaper, The Landmark, headlined the event and revealed details.

THE GREAT WRECK!! A FRIGHTFUL ACCIDENT.

AN OCCURRENCE WITHOUT PARALLEL IN THE HISTORY OF THE STATE.

The newspaper carried a list of the dead and injured, and it included the following “Incidents” in its coverage:

Engineer West was found pinioned under his cab. Within arms reach of him were the bodies of two of the unknown female passengers — how their bodies got from the first-class coach to the engine will never be known.

Miss Luellen Pool held the head of her mother out of the water until her strength was exhausted when the head dropped and the mother drowned.

In the aftermath of the disaster at Bostian Bridge: recriminations, denials, mystery.

Four days after the disaster, a coroner’s inquest determined that the cause of the wreck was the deliberate removal of spikes and bolts from the rails by persons unknown. Skeptics of that finding pointed to an investigation that found rotten cross ties, which indicated lack of maintenance rather than malicious conduct. They suggested the Richmond & Danville Railroad, already in financial difficulty, was pointing a finger of blame in order to deflect potential lawsuits from itself.

Six years after the disaster, two inmates in Central Prison were convicted of causing the accident. Authorities cited testimony of other inmates who claimed the two had confessed their involvement.

In all, 23 people lost their lives, making the Bostian Bridge incident one of the worst railroad accidents in North Carolina history.

For contemporary newspaper accounts on this event and many other North Carolina mishaps, visit GenDisasters.com.