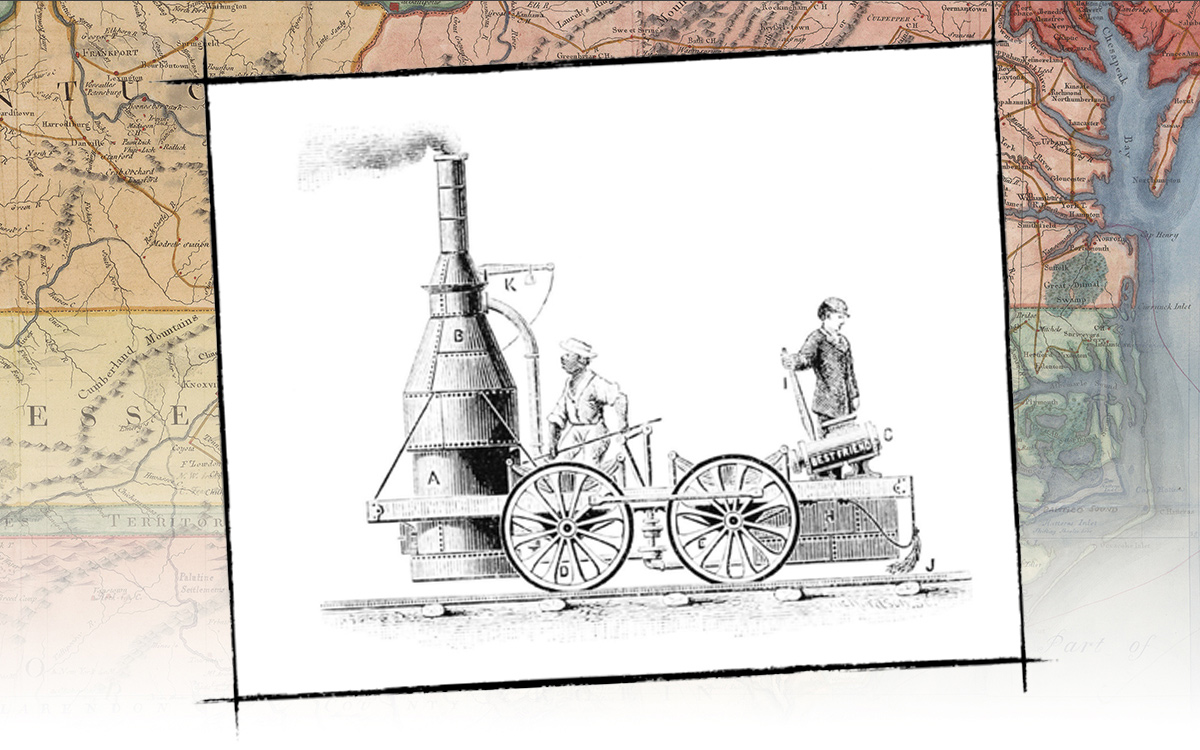 On Christmas day of 1830, the Carolinas unwrapped a bright, shiny toy: a steam-powered railroad. On that day, the little steam engine Best Friend of Charleston chugged out of its namesake city on a six mile inaugural run. The train was small, but the statement was loud, proclaiming the dawn of the age of rail in the Carolinas.

Passengers on the first run of Best Friend of Charleston were thrilled and amazed.

The Charleston Courier breathlessly reported on the inaugural excursion and on the wondrous new reality of transportation in America:

The one hundred and forty-one persons flew on the wings of wind at the speed of fifteen to twenty-five miles per hour, annihilating time and space…leaving all the world behind. On the return we reached Sans-Souci in quick and double quick time, stopped to take up a recruiting party-darted forth like a live rocket, scattering sparks and flames on either side-passed over three salt creeks hop, step and jump, and landed us all safe at the Lines before any of us had time to determine whether or not it was prudent to be scared.

The new rail line grew out of a trade war between Charleston and Savannah.

In 1819, economic recession hit the United States hard, the first market turmoil for the relatively new nation. The “Panic of 1819” wounded both Charleston and Savannah, two major export centers, and both cities looked for recovery. By 1821, the economy was better in both port cities, but Charleston realized it was not recovering as quickly as Savannah, its major commercial rival. Charleston determined to gain ground in this long-running trade competition by encouraging cotton farmers in the interior to send their products to the port of Charleston rather than to Savannah.

Historically, Savannah had held a significant advantage by being located at the mouth of the Savannah River. This major river forms the boundary between South Carolina and Georgia, and in an era when water-borne transportation dominated (roads being deplorable), the Savannah provided an efficient route by which upland farmers in both states could ship their goods to a seaport, and then to markets beyond.

Even farmers as far away as North Carolina looked south for access to markets. In their own state, major Piedmont rivers like the Catawba and the Yadkin/PeeDee flowed south into the other Carolina, making Charleston, and even Savannah, more accessible than North Carolina’s own port at Wilmington.

River navigation had given Savannah the advantage, but new modes of transportation were starting to become available. To accomplish their goal, Charleston had the South Carolina legislature charter the South Carolina Canal and Railroad Company. The new company considered, but rejected, the prospect of digging canals. Instead, they opted for a rail line connecting Charleston and the upland town of Hamburg, South Carolina, just across the Savannah River from Augusta, Georgia. From its first days, the rail line has most often been referred to by the unofficial, but descriptive, name, “The Charleston & Hamburg Railroad.”

Construction went quickly, having the advantages that the railway was a single set of slightly elevated tracks, was built almost entirely of wood, and was laid over relatively flat terrain. (As opposed to the Baltimore & Ohio Railroad – chartered three years before the Charleston & Hamburg, but completed years after – where builders were challenged by a double set of tracks, iron rails laid on granite piers, and mountainous terrain requiring numerous major bridges and tunnels.) Upon completion, the 136-mile-long Charleston & Hamburg was the longest railroad in the world.

As of January of 1831, the Charleston & Hamburg Railroad was running regular freight and passenger service. That gave it the distinction of operating the first regularly scheduled passenger train service in the United States. By November 1833, the railroad line was in full operation, with  three steam engines, eight passenger cars, 11 lumber cars, 14 tender cars, and 56 freight cars in regular service. And the company wanted the public to be assured that in addition to its regular schedule, the railroad was also available at times more convenient to any interested party. Its notice in the Charleston Mercury, July 25, 1831 announced:

The Locomotive Engine runs every day for passengers at half past 4 P.M. Parties wishing it at any other hour can be accommodated by applying to the Engineer.

Another milestone was set down by the little puffer Best Friend of Charleston. Built at West Point Foundry Works in New York State, it claimed the distinction of being the first steam engine built in the United States for use on a domestic railroad. Until Best Friend, all locomotives for American rail had been imported from England, which had industrial expertise and capability far beyond that of its former colonies.

Early fears of railroad travel centered around the health effects of excessive – some would say unnatural – speed.

The speed of The Best Friend of Charleston was laughable by our standards, but in its day, it was audacious. Reputable medical authorities of the time were warning that speeds in excess of 10 mph could kill passengers on the newfangled railroad by depriving them of oxygen. Even though that theory was immediately debunked on the 1830 Christmas excursion, the operational Charleston & Hamburg Railroad set strict – but flexible – speed limits. For trains with a single car, the speed was not to exceed 15 mph; for trains with two and three cars, the speed was not to exceed 12 and 10 mph, respectively. Later regulations specified that no train was to exceed 20 mph “unless greatly behind time.” Ah, what would we do without loopholes?

Speed, it turned out, was not a danger, but the boiler assuredly was. On June 17, 1831 the fireman of the Best Friend of Charleston closed a steam valve because he was annoyed by the constant whistling sound it made. That action put Best Friend of Charleston in the history books again, this time for experiencing the first recorded boiler explosion on an American railroad. The explosion threw the engine 25 feet and killed the fireman. Best Friend was subsequently rebuilt and served as the Phoenix. But explosions became a recurring problem on the Charleston & Hamburg Railroad and elsewhere. (Steamboats had been going “boom” for years, so much so that many of our modern consumer protection laws can be traced directly back to efforts to protect steamboat passengers from a fiery death.)

When a subsequent explosion on the Charleston & Hamburg injured passengers in the first car behind the engine, the company took action. After rebuilding the locomotive, they interposed between boiler and passenger a flat car stacked with cotton bales. At some point, worried that the cotton bales were still not enough protection for paying customers, they added a flat car with a group of black musicians. This might have been the worst musicians’ gig in the world: trying to play your instrument while riding backwards on a lurching, open rail car, showered by soot and sparks from the smokestack, waiting for the boiler behind you to explode.

Wonk alert! For a detailed account of the economic forces behind the Charleston & Hamburg Railroad and of the engineering required to build the line, see Ulrich Bonnell Phillips’ 1908 book A History of Transportation in the Eastern Cotton Belt to 1860. You can use the link to read the book online.